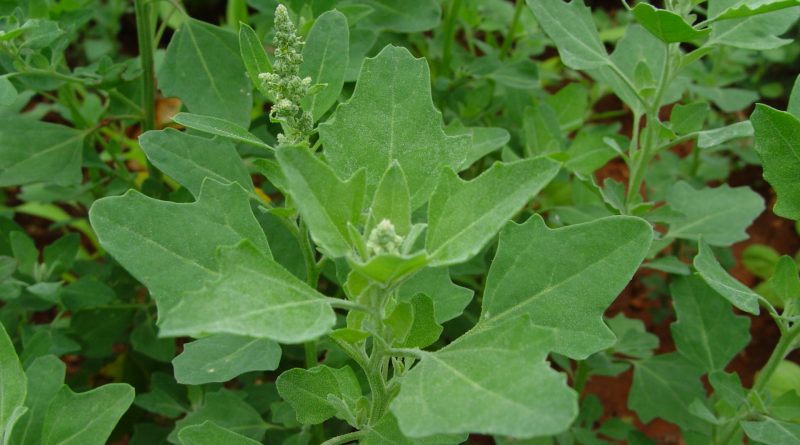 Etymology –
The generic name (Chenopodium) derives from the particular conformation of leaves similar to the goose’s foot: from the Greek “χήν chen” = “goose” and “πούς, ποδός pus, pode” = “foot”: with reference to the shape of the leaves
The epithet album comes from Abies for the silvery white-gray bark of young specimens.
The currently accepted scientific combination (Chenopodium album) was proposed by Carl von Linné (Rashult, May 23, 1707 – Uppsala, January 10, 1778), a Swedish biologist and writer, considered the father of the modern scientific classification of living organisms in the Species Plantarum Of 1753.
In German, this plant is called Weißer Gänsefuß; In French it is called Chénopode blanc; In English it’s called Fat-hen.

Geographic Distribution and Habitat –
The Chenopodium album grows among the crops that have been dragged, spring grains, among the ruins, the rivers, the soils rich in nitrogen more or less saturated. It grows and grows between 0 and 1500 m s.l.m. (In isolated cases it was also found over 2500 m).

Description –
The Chenopodium album is a very polymorphic species also because it is definitely cosmopolitan under the influence of the most diverse habitats. Being an anthropogenic and weedy species is also the influence given by human pressure on these plants. In fact all sorts are considered to be difficult to classify and are still superficially understood. Pignatti called the genre “a tangle of almost inextricable forms” so much that he has recently moved from a taxonomic point of view to the whole family.
The Common Farinella is an annual herbaceous plant but sometimes almost shrubby (we can find it lignificated at the base) with erect-ascending erect, vaguely pyramidal shape. These plants are classified as “apetal” because they have no corolla (the perianzio is present but reduced). They are also distinguished because the leaves are free of ocrea and the plant in general has no latex or even creeping hair and is predominantly glabra They have an unpleasant herbaceous odor and a characteristic “floral” garbage (see common name) on the stems and leaves.The height of these plants can fluctuate from 30 to 150 cm (minimum 20 cm, maximum 200 cm) but often After the fruit is brought to rest because of the added weight, the biological form of the species is spotted (T scap), ie herbaceous plants that differ from other biological forms, since, being annually, they pass the season in the form of seed. With a flowered axle erect and with a few leaves.
It should be noted that it could be confused with the Atriplex prostate Boucher ex DC. Which differs by the astral form of the leaves, for the terminal inflorescence composed of glomeruli clenched in cylindrical ears.

Cultivation –
Chenopod is an annual plant that grows practically everywhere, including in the rubble of old buildings, starting in April. It flowers in early summer. To get the seeds, it’s enough to blur the ripe inflorescences in your hands.
Each chenopod plant can produce tens of thousands of seeds. The chenopod is very prolific in the production of seeds: from each plant can be obtained about 60,000. In addition, these seeds last very long, up to 50 years. When from the inflorescences, wrinkled in the hands, the seeds begin and escape, these are collected and the drying is completed in a sheltered place, on dry paper or paperboard; Then the seeds are separated from the rest of the plant, even though it is not necessary to eliminate all the glomeruli because they are also edible.
The presence of chenopod in the orchard indicates that the soil is fertile, rich in phosphorus and potassium.
Its cultivation is therefore inappropriate in cases where you are in the presence of arable, horticultural or weed crops for the danger of its infestation of difficult control.
This does not take the opportunity to collect it (during its vegetation and before the seeds fall to the ground) for its particular and interesting uses.
Nature offers interesting plants, some of which grow “like the lilies of the fields” is for us to understand its use and regimentation.

Uses and Traditions –
As proved by the findings of many archaeological studies, chenopod has been used for food since immemorial times. The most common variety is the Chenopodium album, from which seeds the aces obtained a flour. Even today, you can make good bread using chenopod flour.
The use of the plant therefore dates back to prehistoric times with evidence found in excavations in some European states (Denmark, Switzerland, Spain, France and the Americas). Nowadays gradually supplanted by C. bonus-henricus and spinach.
In popular medicine for its iron content, vitamin A-B-C, it was used as anti-inflammatory, laxative, anti-rheumatic
The seeds contain Lysine, a precursor of a vitamin such as niacin, essential for the human organism that it is unable to synthesize. In Italy it is still used in some regions (especially Tuscany) to prepare the filling for ravioli or to color the pasta.
Curiosity: This plant, spontaneous in boreal America, was cultivated by the indigenous people of New Mexico, Arizona and Utah because they used it for soup cooked and with flour minced seeds bake to make buns or used like our polenta.
The same species was cultivated in Asia and India to overcome famines and keep animals and animals alive. With spinach cultivation then fell into disuse.
There are several interesting substances in the Chenopodium album: these plants come with essential oil called “chenopod essence”, they contain betaine and other substances such as iron and vitamin B1. These plants also contain other substances such as saponins and oxalic acid. The amount of these substances in the plant is small, but an exaggerated consumption of leaves in certain individuals can create problems. Problems that can increase if the plants are collected on nitrogen-rich soils.
The average contents of the leaves of the substances of concern are: protein 3.9%; 0.76% fat; Carbohydrates 8.93%. That of the seeds (only the main nutritional substances): carbohydrates 49%, proteins 16%.
Among the healing properties of the common Farinello the most notable is antielmintica (eliminates various types of worms or parasites); Other properties according to popular medicine are: carminative (favors the release of intestinal gases), stomachic (facilitates digestive function), anti-inflammatory (healing from inflammatory states) and digestive in general. The parts that are used are mainly the leaves.
Spontaneous chenopodia is consumed mainly as a vegetable in the Italian Alpine regions and especially in the Dolomites. It is cooked in salad or stuffed in a frying pan or as a filling of ravioli or to flavor gnocchi and quenelles. The plant is cultivated (or was cultivated) for burial purposes in boreal america by Indian New Mexicans and Arizona inhabiting tribes. In some cases, semi-minutes can be used as “rice” or grated to produce flour; Otherwise young leaves will be eaten as salad or soup or cooked as spinach. Even on the other side of the world (as in India and temperate areas of the Himalayas) this plant is still used in the kitchen.
Il Chenopodium album è una specie parecchio invasiva tanto da mettere in difficoltà la coltura di altre piante come le patate, il frumento e gli ortaggi in genere, oggi viene ormai indicata tra le malerbe.
Ad esempio nelle colture di grano può incidere sulle perdite fino al 13%, per la soia si può arrivare fino al 25% ed il 48% per la barbabietola da zucchero.