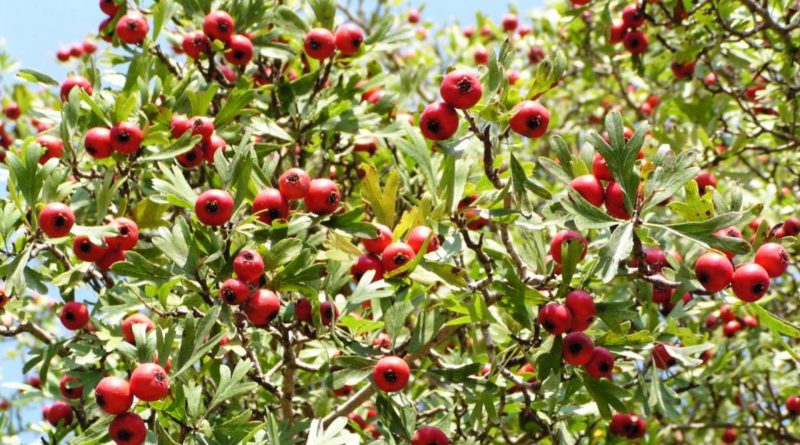 The azerole (Crataegus azarolus L., 1753) is a plant, which looks like a shrub or small fruit tree, belonging to the Rosaceae family and to the Crataegus genus.

Systematics –
From the systematic point of view it belongs to the Eukaryota Domain, Kingdom Plantae, Magnoliophyta Division, Magnoliopsida Class, Rosales Order, Rosaceae Family, Maloideae Subfamily and therefore to the Crataegus Genus and to the C. azarolus Species.

Etymology –
The name of this tree comes from the Greek “Kratos” = strength, referring to the strength of the plant and in particular of the wood; the specific term seems to derive from the Arabic “al zoruron” with the meaning of medlar.

Geographic Distribution and Habitat –
Many botanists believe that this species is native to Asia Minor or the island of Crete. In Italy we now find it occasionally in Liguria, Piedmont, Lombardy, Emilia-Romagna, Sicily and Puglia. This species once widespread in the Mediterranean basin for the production of fruits has been decreasing over the years and today is considered a rarity; Crataegus azarolus is now listed among the forgotten or minor fruits. This species is typically thermophilic and prefers for its growth the hilly slopes that are in good heliophilic sun exposure, growing optimally in the same climatic zone as the downy and holm oak and in clayey or calcareous soils. 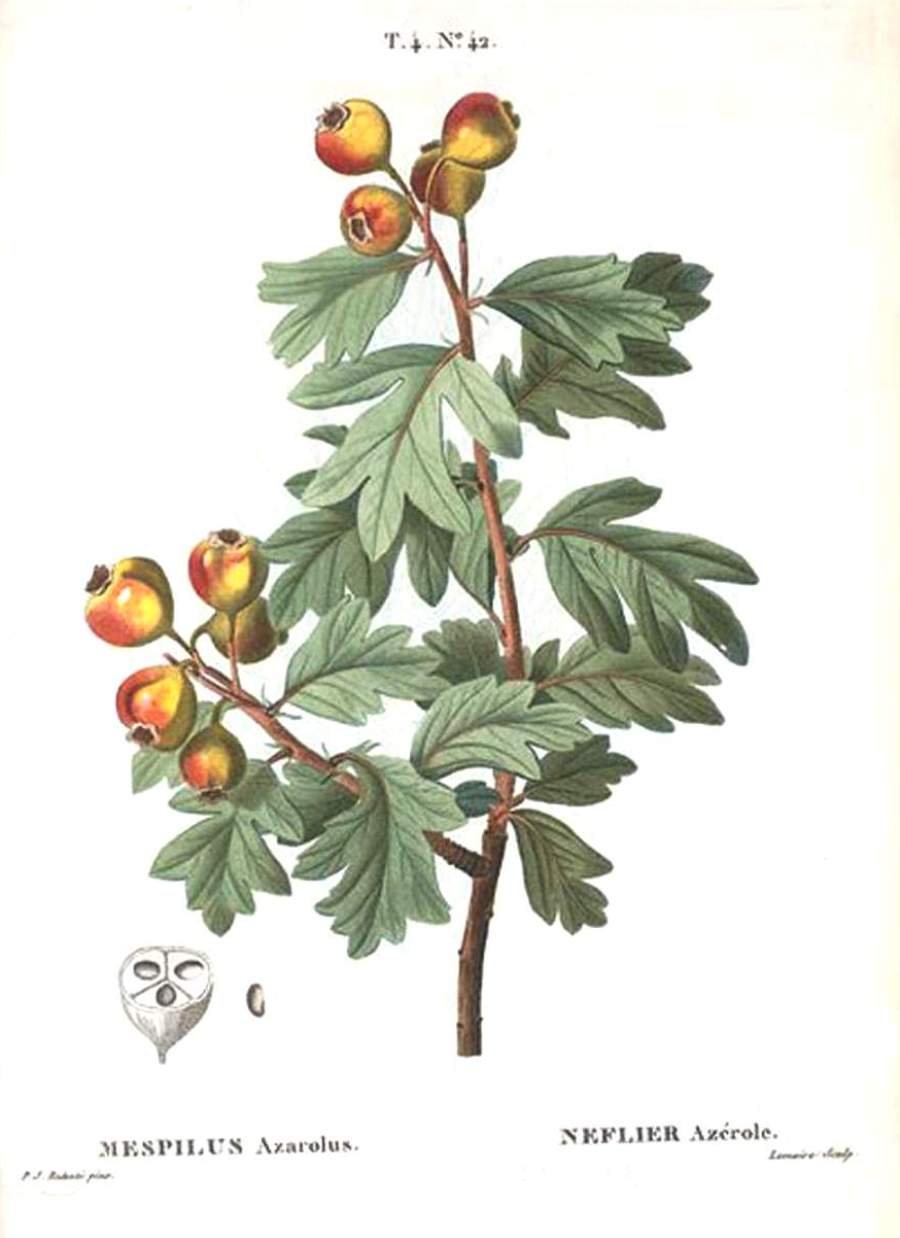 Description –
The nettle grows up to a maximum height of 3-5 meters; it has thorny branches which in the wild can become twisted. The zero can live for a long time, becoming centenary. It is characterized by slow growth and is a small tree or shrub, deciduous and deciduous. It has deciduous leaves, bright green, oval and wedge-shaped and the base is deeply divided into three or five whole or toothed lobes with a short and pubescent petiole. The flowers are white in inflorescences of 3-18 and with flowering period occurs from April to May. The fruit is a small edible pommel with a globular shape (from 1 to 3) cm in diameter and is amaranth red, white or yellow when ripe (depending on the cultivar) with a fleshy edible pulp with a sweet and sour taste with three small seeds inside. The ripening period is in September.

Cultivation –
The azerole must be planted in the period of late July, preferably using varieties sold in the nursery as they are the only ones guaranteed for the absence of bacteria. Planting can continue until November; the important thing is to avoid periods of sudden frost that do not benefit the plant.
Being a rustic plant it manages to vegetate without too many problems in almost all conditions. It can tolerate sub-zero temperatures down to -25 degrees.
Azzeruolo requires an average fertile soil, free of water stagnation with an optimal pH of 6.8 to 8.5.
The planting of the azerole can be done from a frank specimen or through the use of a hawthorn rootstock. Before planting, the soil must be well prepared. If you grow few plants, you just need to drill deep enough holes (about double the bread of earth) and bury a good percentage of mature manure on the sides of the hole. The sixth can vary between 3 meters between the plants and 3.5 meters between the rows up to 4 meters between the plants and 4.5 m between the rows if the rootstock used is the frank.
For the reproduction of the plant it is possible to practice grafting which is particularly effective; this can be done in the period of July and August through a dormant bud or in February-March through the triangular and split grafts. Hawthorn is recommended as rootstock. The reproduction of the azerole by seed is a little used technique since the entry into production of the plants takes 10 to 15 years.
To favor the development of the fruit, it is advisable to top it in summer or autumn. This technique is applied on mixed branches or the branches of the year that have buds to wood along their length and fruit buds at their apex. This technique favors the formation of further fruit buds in the following production season.
It is possible, in the period of June July, to carry out a light superficial tillage of the soil by breaking the crust or cutting the grass if a turf has been provided to the orchard.
Being, as mentioned, a rustic plant, the irrigation interventions are almost completely neglected. If you have a plant intended for the production of fruit for sale, it is necessary to treat the plant exactly like the apple tree, remembering that in any case the quantities can be reduced slightly.
For fertilization we recommend a pre-planting fertilization with mature manure (in the hole if you use this technique) and for the production one you can adjust it like that of the apple tree. Nitric nitrogen supplies should always be avoided as they soften the plant predisposing it to more parasitic attacks. For this reason, it is always better to fertilize with mature manure in the late winter period, then mixed with the soil with a superficial tillage.
For the pruning of the Azzeruolo it is necessary to take into account the shape chosen for the breeding to be obtained. The first cuts are necessary to give the shape to the plants by optimizing the available spaces. During the growth some shortening of the older branches will be needed. Among the most used forms of cultivation we remember: vase, globose and expanded globose.
The fruits are harvested in a staggered manner from the first ten days of August to the end of September. Usually, however, the harvest takes place in a single pass, then leaving the fruits to ripen in a suitable place. The best way to store them is in wooden or plastic crates, placing the fruits on a bed of straw in a room should have a temperature between 4-5 degrees.
The most fearful disease of the azerole is the blight fire that attacks the pome fruit; it is a disease that must be treated by law.
Other adversities can be represented by aphids (the same ones that affect the apple tree) present above all on the floral corymbs and young shoots. Other dangerous insects are: Yponomeuta pan, Pandemis cerasana, Lymantria dispar. Among the cryptogamic diseases we remember instead the Oidium, the Punctuation and the Rust.
Among the cultivars we mention: Bianca d’Italia or Moscatella, Rossa d’Italia and Gialla del Canada. Recall that some varieties are self-sterile, so to have fruiting it is necessary to plant or have at least two different varieties present to pollinate each other.

Customs and Traditions –
Azerole is one of the most important natural sources of vitamin C and A. these fruits, when eaten fresh, are thirst-quenching, refreshing, diuretic and hypotensive; the pulp, in particular, has anti-anemic and ophthalmic properties.
The azure can be used for jams and jellies, as well as for the preparation of salads and fruit salads. These fruits are also used in confectionery for the decoration of cakes and are normally preserved in spirit or grappa.
Widespread plant as an ornamental in parks and gardens, it can have an important feeding function for avifauna.
In past rural civilization, Azzaruolo was often planted in rows along the roads of country houses and on farms. Azzeruole, similar to small apples, with a flavor similar to that of apples or medlars, were highly appreciated in Renaissance tables and were traded in various Italian areas until the last century. They can still be found for sale in local markets and grocery stores in some cities.

Preparation Method –
The preparations include the flower decoction which is considered an effective remedy for hypertension.
The fruits, as well as being eaten raw, are excellent, as mentioned, for making jams. For the preparation, 1 kg of previously boiled fruit puree is used to which 2/3 of sugar by weight are added; after which it is necessary to continue cooking over low heat until a homogeneous consistency is reached.
Everything can be used from the zero; remember that wood is used to make ornaments as it is particularly hard and resistant.