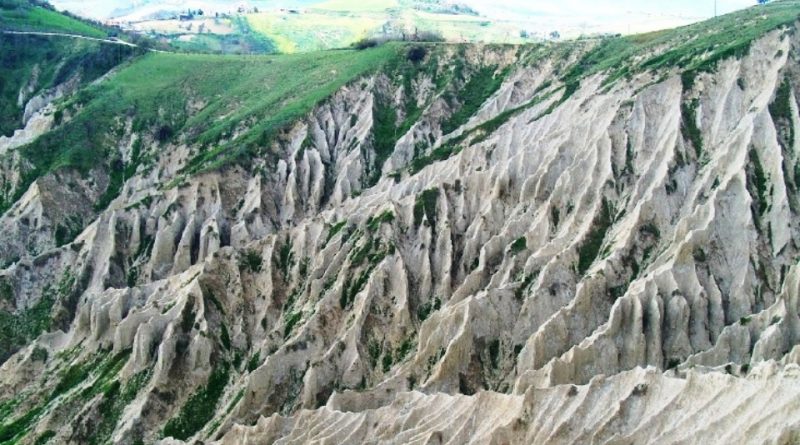 The term gully refers to a morphology of land, typically eroded by run-off waters, due to the absence of plant coverings, which are transformed into valleys separated by ridges in the shape of a knife blade that take on ordered dispositions in a fishbone, similar.
The gullies are therefore a geomorphological phenomenon of soil erosion due to the effect of water washout on degraded clayey rocks, with scarce vegetation cover and therefore not very protected from runoff.
In the gullies, the furrows that form inside the ground are rapidly accentuated, lengthening and proceeding backwards, multiplying and branching. This process extends to entire slopes, divided by numerous valleys separated in turn by narrow ridges with rapidly evolving bare micro slopes.
The causes that lead to the formation of the badlands are various but often concomitant.
The study of badlands morphologies has been faced with different approaches: geological, geomorphological, geotechnical and geographical. The literature on the subject is very wide and mainly investigates the causes and parameters that influence the phenomenon.
The study of the factors that lead to the genesis of badlands morphologies, of their reciprocal interactions and their relative incidence, is the subject of dispute and scientific research.
According to Castiglioni (1933) the development of the gullies would be conditioned, above all by the position of the strata. The gullies would settle on the support-bearing slopes, characterized by greater slope, less predisposed to mass movements, but site of surface erosion.

The different stratigraphic arrangement of the slopes of the watercourses causes different conditions of mechanical resistance to stress, causing a characteristic and frequent valley asymmetry. The support-bearing slopes undergo a continuous rejuvenation process which has the most spectacular result in the gullies. Opposite landslide slopes can be the site of superficial movements and slow flows.
However, the causes that lead to the formation of gullies are varied, even if these are formed on clayey soils with a discrete sandy component; this is associated with a climatic regime characterized by a long dry summer and intense rains concentrated in certain periods of the year; the southern exposure of the slopes contributes to the formation of the gullies, with steepness of the slope between 40-60 ° which favors the rapid flow of water; there is also the existence of a less erodible level at the top of the slope.
From a geological point of view, it is not possible to trace their formation but it is believed that in Italy the gullies were formed during the Holocene, when the deforestation of evergreen oak forests, which occurred by human work, exposed the clayey soils, highly erodible, to the rigors of the climate. Phenomena of hydrogeological instability, such as runoff and runoff of meteoric waters, together with landslides and creeps, became the determining factors in the shaping of the land, the result of which was the genesis of the badlands.
Badlands tend to form on more granular soils (clayey silts), with a percentage of sand (6-18%) in their composition. In both cases the soils are often alkaline, therefore particularly subject to erosive phenomena; furthermore, the high sodium content gives the mass a dispersive behavior and is easily attacked by rainwater poor in salts. The rate of degradation of the clayey slope is a function of the temperature acting on the air and water present in the mass: during the rains this is susceptible to erosion all the more intense the drier it was previously.