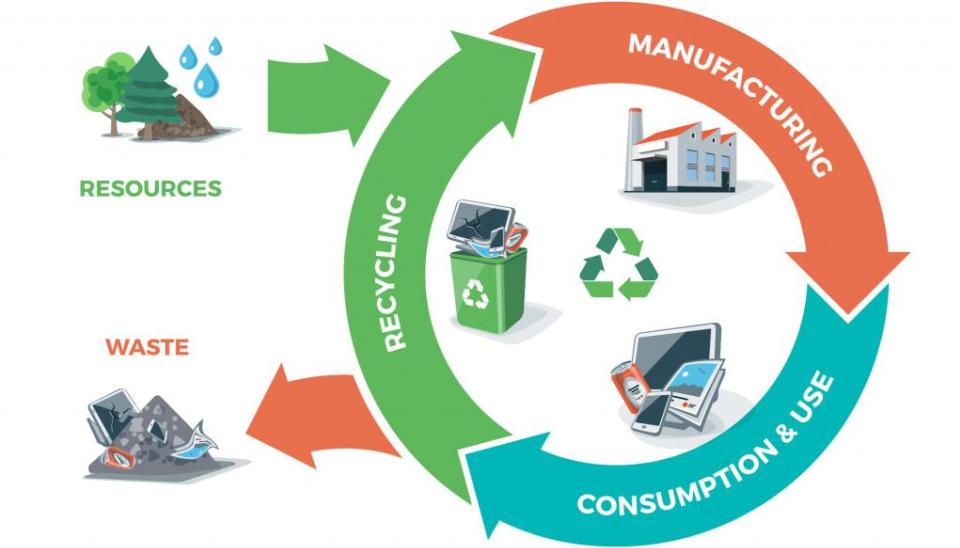 The principle of circular economy arises from the idea of ​​economic systems able to sustain and regenerate themselves, keeping biological and ecological assets constant. According to the definition of the Ellen MacArthur Foundation, in a circular economy the flows of materials are of two types: the biological ones, able to be reintegrated in the biosphere, and the technical ones, destined to be revalorized without entering the biosphere. In the Circular Economy the economic and social systems have a strong connection with the territorial ecological systems with economic models substantially different from the linear model (for example through the use of renewable energy instead of fossil fuels), and to the role of diversity as essential feature of resilient and productive systems.

For this reason the circular economy is based on an economic model that fits in with the ecological model; for this reason the traditional conception of money and finance is revised: some of its pioneers have proposed to modify the instruments for measuring economic performance so as to take into account several aspects besides those that determine the gross domestic product. In the circular economy the rules of thermodynamic returns are applied, reporting the question on an area of ​​synchronism with the rules of this science. Being the same rules of operation of the ecosystem based on these principles it follows that the economic systems must function as organisms, in which the nutrients are processed and used, and then be re-introduced into the biological and technical cycle. This involves a substantial revision of the economic and financial rules and of the monetary countervalue. In the circular economy there are therefore the thermodynamic rules of closed or open dissipative cycles and their relative returns. This leads to the perfect synchrony between economic rules and thermodynamic rules of the systems; between economic returns and energy yields. The circular economy thus becomes the mode of adjustment of the economy based solely on monetary returns unmounted by energy. The concept of Circular Economy was born in 1976, in the report presented to the European Commission, entitled “The Potential for Sub-Instituting Manpower for Energy”, where Walter Stahel and Genevieve Reday outlined the vision of a circular economy and its impact on the creation of places work, resource savings and waste reduction. The research was published in 1982 in the book Jobs for Tomorrow: The Potential for Substituting Manpower for Energy. The circular economy therefore upsets the old paradigms of specialization in favor of those of the potential of biodiversity in all forms. The main objectives of the circular economy are the extension of product life, the production of long-lasting goods, the reconditioning activities and the reduction of waste production and, ultimately, the emulation of energy synchronisms and the functioning of ecological systems. He also insists on the importance of seeing products as real services, in reference to the concept of the “functional service economy”, which falls within the broader notion of “performance economy”. In short, the Circular Economy is the new frontier of a world economic system that does not compete with territories and goods but makes them services of mutual benefit.