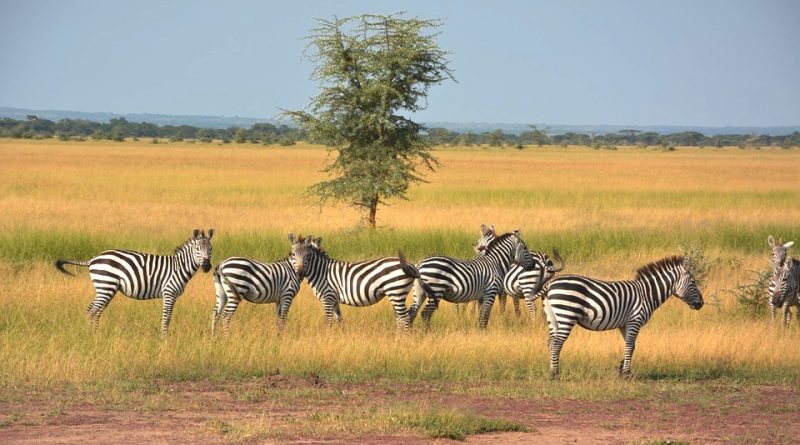 The Serengeti National Park is one of the most well-known protected areas on the African continent. The reserve, declared a Humanitarian Heritage in 1981, presents an incredible wealth of flora and fauna.
The Serengeti ecosystem is home to more than 1,500,000 wildebeests, about 300,000 zebras, 500,000 Thompson gazelles, more than 2,700 lions, 1000 leopards, 500 cheetahs, huge elephant herds, eland, impala, waterbucks, giraffes, ostriches , genette, and the waterways are populated by crocodiles and hippos; there are more than 400 species of birds. This 15,000 sq km area of ​​the Serengeti National Park is only the largest part of a larger ecosystem, which also includes the Ngorongoro Plains (the flat region to the northeast of the Ngorongoro Crater, which plays a very important role in the famous migration and is administered by the Ngorongoro Conservation Area) and the Maasai Mara (located further north, in Kenya). Here the orography, the composition of the soils and, consequently, the type of vegetation, allow sightings of animals without equal in Africa. The subsoil, formed (especially in the southern part) by volcanic rocks, prevents the growth of tall trees in most of the Serengeti and the prairies prevail, so the open environment favors sightings.
The Serengeti National Park is characterized by the largest migratory movement of wild animals in the world, due to the wildebeests and zebras of the Serengeti, always looking for new pastures and water, which characterize the Great Migration of the Serengeti. By removing the soil with hooves and their feces, these animals contribute substantially to the annual renewal of the park’s turf. It should also be said that a permanent population of resident and non-migrant herbivores is always present along permanent watercourses. In addition, gazelles, antelopes and giraffes tend to be more permanent and during the dry season are concentrated near the increasingly scarce sources of water available, resulting in the gathering of lions and other felines.

We give some numbers on this very important protected area in the world. The Serengeti National Park is one of the most important protected natural areas of East Africa with an area of ​​14,763 km², in northern Tanzania, in the homonymous plain, located between Lake Victoria and the border with Kenya (1.30′-3.20 ‘ S, 34.00’-35.15 ‘E). it is located adjacent to the Kenyan park of Masai Mara, the Ngorongoro nature reserve and other important wildlife reserves.
In the language of the local Masai populations, the name of the park means “boundless plain”. But this area has a history that is lost in the mists of time. In fact, the human presence in the Serengeti area is evidenced by paleontological findings of extraordinary importance; in the Serengeti plain there is the famous site of Olduvai, where the remains of the Australopithecus boisei, a hominid dating back to about 1.5 million years ago, have been found.
The history of this Park is equally animated: before the arrival of the Europeans, the Serengeti plain was inhabited mainly by the Masai, breeders and semi-nomads. In the last years of the German colonial administration, the region became a protected area, and a first nucleus of today’s Serengeti, of 2286 km², was declared a hunting reserve in 1929. Subsequently the English administration took over with the birth of the State of Tanganika, established the national park in 1951. The park also initially included the Ngorongoro crater, which became an independent protected area in 1956.
It must be said, however, that the establishment of the park was accompanied by the relocation of local populations and the coercive nature of this operation has given rise to a controversy that is still not completely suppressed.
The area is characterized by a tropical climate characterized by two seasonal rainy periods: the “big rains” from April to June and the “small rains” from October to December. The southern part of the park is made up of vast arid grasslands, interrupted by hills of metamorphic rock often surrounded by bushes and trees, and known locally as kopjes. These small rock formations have emerged following the erosion of the surrounding soil by atmospheric agents. Going northwards, the landscape changes: with the increase in rainfall, which also feeds some permanent rivers, the growth of tunnel forests is encouraged, as well as the formation of wooded areas of savannah (characterized by acacia thickets) and of spiny bushy savannah.
The flora of the park is mainly characterized by the herbaceous species Digitaria macroblephara and Sporobolus marginatus, while the most present arboreal vegetation is due to that of the genus Commiphora and several species of Acacia, including A. drepanolobium, A. gerrardii, A. lehay, A seyal e A. tortilis.
But what strikes the visitor of the Serengeti National Park is above all its exceptional wildlife wealth, which makes it one of the most representative regions of the sub-Saharan savannah ecosystem and one of the major tourist attractions of East Africa. There are, among other things, all five so-called “big five”: elephant, lion, leopard, black rhino and buffalo.
Human settlements are forbidden in the park, with the sole exception of those destined for TANAPA staff (Tanzania National Parks Authority) and tourist accommodation facilities and scientific teams of the Frankfurt Zoological Society. The TANAPA headquarters, and the main airstrip in the park, is located in Seronera.
Among the park’s accommodation facilities we mention the various tented camps and four lodges: the Seronera Wildlife Lodge, the Lobo Wildlife Lodge, and the more recent Seregenti Sopa Lodge and Serengeti Serena Lodge.