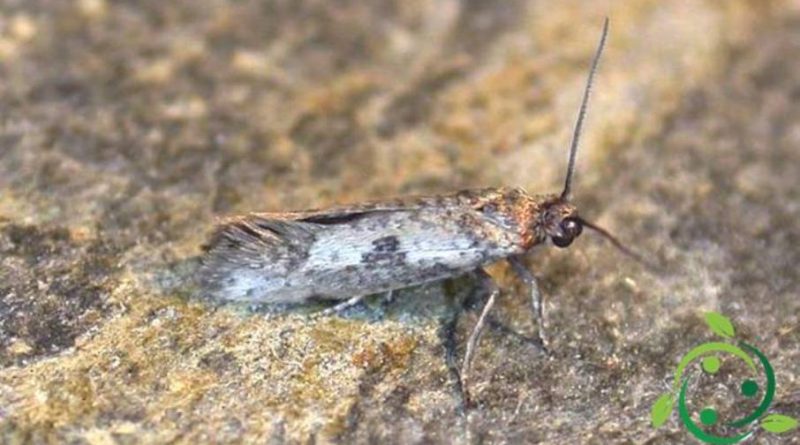 The olive moth (Prays oleae Bernard, 1788) is a moth of the Praydidae family which represents one of the most important adversities in the cultivation of the olive tree. This moth is present in all the Italian olive-growing areas. It is a small gray butterfly with blackish spots on the wings, 12 – 13 mm. The larvae, of light hazel color, are about 8 mm long and have greenish longitudinal bands on the back, and yellowish on the belly.
The damage is related to the trophic activity of the larvae that dig tunnels on flowers, leaves and fruits. The greatest damages are obviously those related to the attack of the fruits.
The measures to reduce the intensity of the population are agronomic and ecological in advance.
Those of an ecological nature are linked to the need to reduce plant densities and the specialization of olive groves by introducing shrub species from hedges to be inserted in the perimetrations of the plots and possibly to interruptions of plots that are too extensive. The shrub species must be chosen among the autochthonous ones of the cultivation area, inserting more species and creating mixed rows. In this way it is possible to increase the useful homoomofauna too often reduced or even eliminated by indiscriminate chemical treatments.
Those of agronomic nature are linked to raising the olive tree in less advantageous conditions for the olive moth. These include grassing; the cultivation technique with soil totally devoid of grassy layer creates an unnatural ecological environment where the parasitic biocoenoses, between useful insects and parasites, are difficult to balance dynamically. Grassing, especially with legumes, serves two purposes:

– increases the niche system of useful species;
– increases the nitrogenous endowment for the olive grove, thus eliminating the need for nitrate nitrogen inputs which, by excessively soothing the vegetation of the plant, make the plant tissues more palatable.
Another useful precaution is to keep the plants aired inside, which in fact is now in modern olive growing.
Even the irrigations should not be abundant in order not to stimulate the vegetation of the plant that tends to increase the populations of this as well as other harmful insects.
Once the olive grove has been rebalanced from an ecological and agronomic point of view (which should be done during the planting phase) better conditions have been created within it.
But it is possible (and unfortunately often certain) that around our olive grove the ecological condition is not in equilibrium (for excessively specialized plants, use of chemistry, etc.) for which it will still be necessary to operate preventive action.
In this sense, the preventive fight must be carried out against the carpophagous generation, the one that attacks the fruit, through the use of predators, also present in nature; an increase in these populations will be made, decompensated by external factors.
Among these we remember some predators, belonging to different orders, that parasitoids, mainly attributable to the order of the Hymenoptera. Among the most active parasitoids of the Prays oleae we remember: Ageniaspis fuscicollis var. praysincola (Hymenoptera: Encyrtidae) and Chelonus elaeaphilus (Hymenoptera: Braconidae). THERE. fuscicollis praysincola is an endophagous and polyembryonic parasitoid that develops three generations a year, synchronized with those of the Prays. C. elaeaphilus is also an endophagous parasitoid. Both attack the larvae. The action of these parasitoids is assisted by others, ascribable to Hymenoptera Chalcidaids and Icneumonids acting as ectoparasitoids on larvae or as endoparasitoids on chrysalises.
Predators instead act fundamentally on eggs and larvae in the early stages of development. Among the most active we mention the larvae of Neuropterans (Chrysopids), juvenile and adult stages of predatory Rincoti (Antocoridae and Miridi), the larvae of Hymenoptera oofagi (Tricogrammatidi) and finally those of Ditteri (Sirfidi). The latter are also active on larvae.
Both in the case of prassitoids and predators, the effectiveness of their action depends on the state of health of the agro-ecosystem and on the degree of biodiversity. It is useless to include them if the agro-ecosystem is not properly balanced. It is a mistake that unfortunately many do.
In case you have to intervene anyway to further decrease the populations, you can use the Bacillus thuringensis, natural pyrethrins or azadirachtin. In particular, the Bacillus, acts exclusively on larvae that are found outdoors and very effectively in the early stages of development and is intended to lower the density of the next population.
Also for the moth of the olives you can use the so-called Tap Trap food traps or Vaso Trap: the bait for lepidoptera must be based on wine sweetened with sugar, cinnamon and cloves. The goal of bio traps is instead the capture of adult moths, to reduce the population and have less larvae.
However, it is important to observe the olive grove in order to program biological control interventions. For example. the observation of the “cobwebs” around the inflorescences, clearly visible and easy to identify. The alarm triggers (taking into account the biological cycles of the moth and its high mortality rate) when 35-40% of the flowers are affected.
Even more important is the monitoring of the ovipositions which allows a direct estimate of the probable infestation, it being understood that in the estimate an adequate reduction coefficient must be applied. The monitoring must be done on a sample of 100-200 olives taken with a random distribution and subsequent analysis under a binocular microscope. Normally the intervention thresholds, which must however be calibrated on the local realities, are around 10-15% for the oil cultivars and lower for the table cultivars.