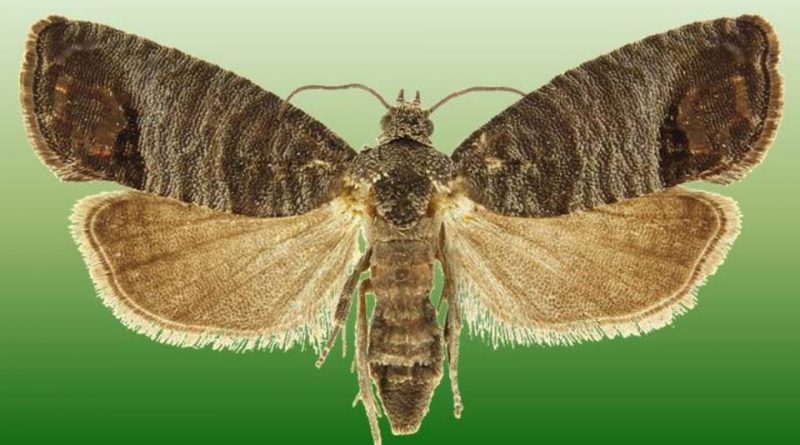 The carpocapsa of the apple tree (Cydia pomonella (Linnaeus, 1758)) is a lepidopter of the family of the Tortricidae.

Geographic Distribution and Habitat –
Cydia pomonella, also known as “apple worm” or “apple bug” is a moth native to central Europe, a geographical area where wild fruit trees (Malus sylvestris) live. From this area of ​​origin it was then extended, already in ancient times, to Asia and from 1700 is also present in the United States.

Morphology –
The larvae of Cydia pomonella, which are carpophagous, are whitish in color, with a dark head and with the growth become yellowish and finally rosy, with a length of about 15-20 mm. The adults become butterflies of the size of 15-22 mm wingspan, with anterior wings of greyish color, marbled with transversal bronchial striations, more intense in the distal margin.

Attitude and biological cycle –
Cydia pomonella overcomes winter in the mature larva stage, enclosed in a small cocoon, in the ravines of the rind of the host plant or at the base of the same in the ground, and also in cocoons on the harvesting boxes (especially if made of wood). The larvae pupate in spring and between April and May, adults flicker. After mating, the females lay their eggs on the leaves and, from these, the first generation larvae are born, which will be active until the beginning of July and then incisal on the branches, or on other woody organs of the plant, to originate the adults of 2nd flight; these flickers from June-July until the first half of August and will directly take over the already developed fruits. These larvae are active from July to the whole of August, after which they either enter into diapause, ending the annual cycle, or they incriminate themselves to give rise to the 3rd generation whose adults flicker from August to September. Therefore, the Carpocapsa performs 2-3 generations a year, while in some areas of central and northern Europe it can only perform one generation. For the containment of this species read the following card.

Ecological role –
The carpocapsa is undoubtedly the most feared insect on all the pomaceous (apple, pear, quince) and walnut, as it is able to perform damage that can sometimes cause complete loss of production. Occasional or accidental occurrences can be found on other plants such as medlar, rowan, khaki, pomegranate and even on stone fruit (peach and apricot), orange, cherry and chestnut.