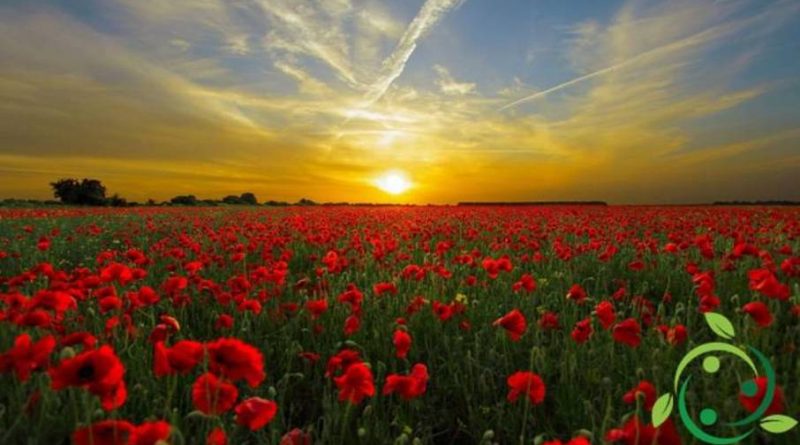 How to grow poppy and its properties

The common poppy or rosolaccio (Papaver rhoeas L.) is an annual herbaceous plant belonging to the Papaveraceae family; in this sheet we will see the most important news about its properties and how to grow poppy. Let us remember in the meantime that the common poppy is a species, widely diffused in Italy, it normally grows in fields and on the edges of roads and railways, considered by some to be a weed. Both the petals and the seeds of this plant possess light sedative properties; in fact, the common poppy is a close relative of the opium poppy, from which the morphine is extracted. From the caule of the poppy, once incised, a white latex sticky to the touch comes out.
Due to its particular properties, flowers and capsules are used. It is also used in the culinary field where its seeds are used, among other things, to enrich bread, pizzas and focacce.

The main bioactive substances of the poppy are: Gallic acid, Malic acid, Monoic acid roedico, Mucillagine, Readina alkaloid. All these active ingredients, used in various ways and always after medical consultation, have the following properties: soothing, bachic, expectorant, sedative, somnolent, pectoral, coloring.
Important are the properties possessed by the seeds of the common poppy; remember that they are rich in calcium and vitamin E; they also have a sedative and calming effect and are an important source of fatty acids and plant proteins. In detail the seeds of common poppy also contain manganese, linoleic acid (Omega 6), phytosterols (which are the substances that can reduce the concentration of cholesterol in the body); moreover, the presence of Group B vitamin, in good concentrations, makes the poppy seeds of natural micronutrient supplements.
As far as the cultivation of the common poppy is concerned, it is easy to cultivate herbaceous plants. The annual species are generally sown directly to the home (they do not tolerate repotting). Poppies, like many spontaneous species, tend to easily autoseminarsi, so once introduced into our plot we will get, every year, a production of these plants with their characteristic red flowering from April to autumn. Before sowing them, however, work well for the soil (refining it carefully) without any need to make any fertilization. Once sown, if they are small extensions they must be covered with a mixture of sand with the same soil or, for large extensions, a very light rolling must be carried out. Sowing should be done in the spring, at the end of the cold period and, only in the case of dry season, irrigate at the beginning of the germination period.
Let us remember then that at the arrival of winter the poppy dries completely. Whether it is annual poppy or perennial reappear the following year, when spring arrives.
From the phytosanitary point of view, the common poppy is a very rustic plant; however it can suffer radical rot and can be prey to attacks by aphids and bugs.