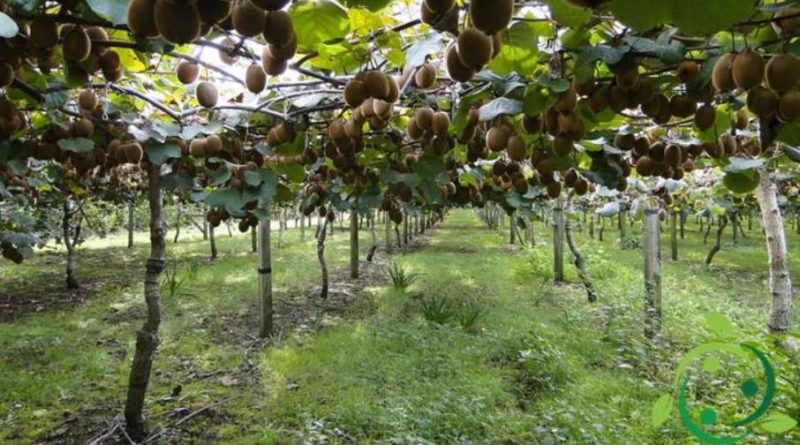 How to grow Kiwi in a biological way

The Kiwi plant (Actinidia deliciosa (A. Chev.) C.F. Liang & A.R. Ferguson, 1984) although originally from the southern part of China is cultivable in Italy, which among other things is today among the countries with the highest production. Its cultivation in organic is rather simple provided that they take the simple technical and agronomic measures. Among the first precautions it should be remembered that being a lianiform species it needs supports on which to support and produce.

The kiwi is a dioecious species and therefore needs at least one male specimen every 6-8 females. Although it is a plant that can withstand vegetative rest in temperatures of – 15 ° C it prefers temperate climates but not excessively hot and fears spring or autumn frosts. It is also sensitive to winds for which it is not recommended for planting in windy areas. Also prefer fertile soils, not calcareous, with neutral pH or just subacid, very well drained and well endowed with organic substance that however must be made in replanting.
Before the Kiwi plant, whether it is made for family or company production, a tent must be set up; then with poles (for small preparations better those in chestnut) and iron wires at a height of 2 meters. The recommended sixth is 3.50 in the row and 4.50 meters in the row and remember to prepare in a homogeneous way, every 6-8 plants a male specimen. For each plant it is necessary to prepare a 50 cm hole, where 15 kg of organic will be buried (well mature manure is preferable). If the soil is with a pH lower than 7, the ashes of the pruning can be added periodically, replenishing some elements, including calcium, which is important for the quality of the fruit. For a good size of the fruit we recommend the installation of some hives (at least 10 per hectare) and / or in addition (but only for small extensions) the manual pollination which consists in picking the male flowers and rubbing them repeatedly on the female ones.
Irrigation is good that it is ready to drop and carried out from the moment of flowering; attention to the quality of the water that must contain little NaCl. To reduce water intake, it is useful to use mulch with straw that will protect plants from freezing.
For pruning, once the awning is mounted and supported the plant, a lot of work is done on the female specimens, removing the old branches and acting with thinning out the productive ones to not overshadow the tent. For the male specimens the pruning can be less not having to bear fruit but flowers. Once attached, the fruits must be thinned (to increase the size) leaving the central fruit of the inflorescence. Kiwi harvesting takes place ordinarily between October and November.
Among the most important plant diseases are bacterial cancer and root cancer, but if you have used healthy material, used clean scissors, planted in well drained and well-ventilated soils, the tent should not show up. Among the mushrooms we remember the botrytis that can be fought with Bordeaux mixture, while among the insects we remember the Eulia which can be fought with Bacillus thuringiensis, the Metcalfa pruinosa, the white Cochinilla and, especially in spring, the Aphids. Against these insects you can successfully use Marseille soap and the first extras the nettle macerate which also performs a positive fertilizing action.