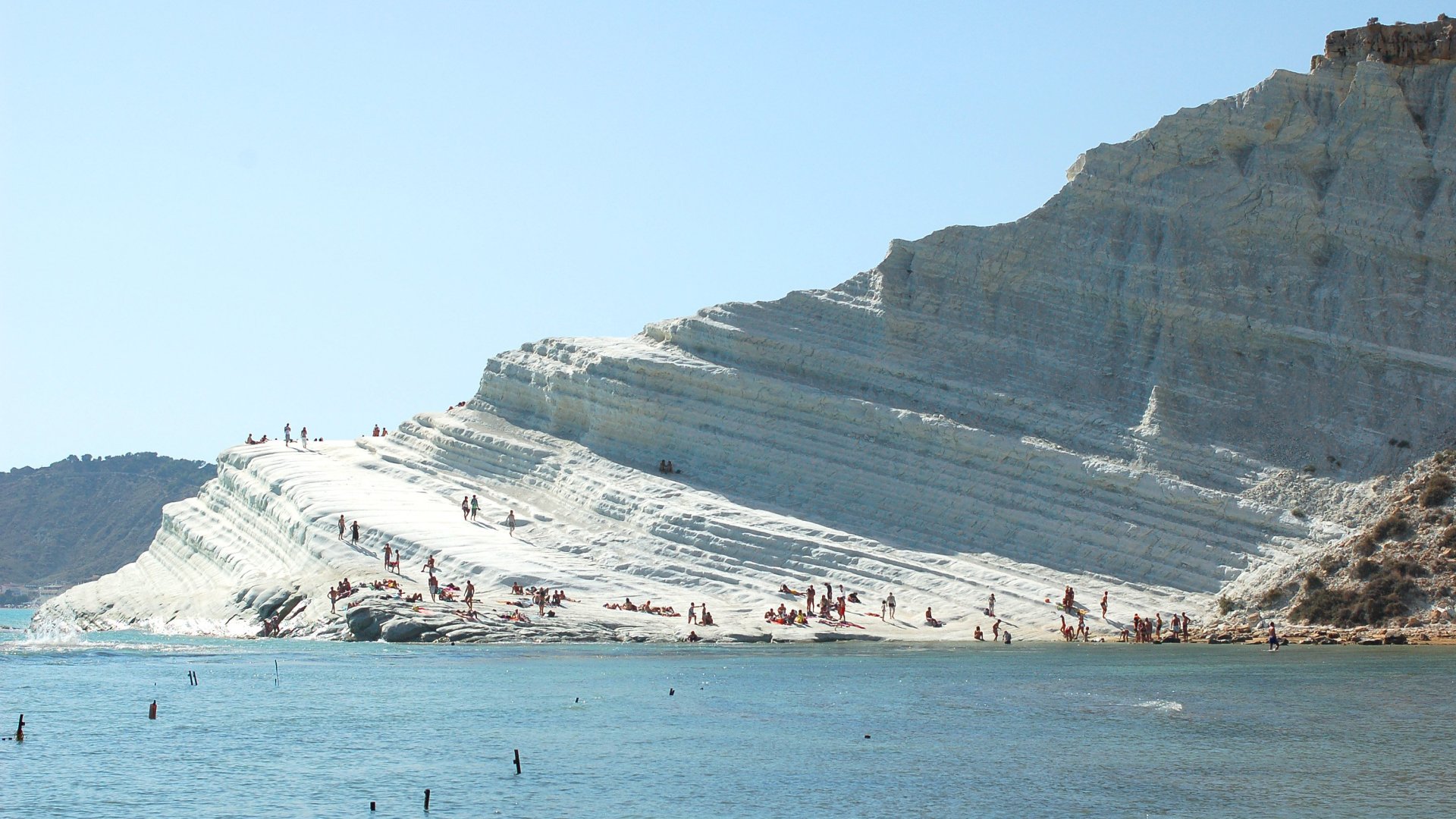 Scala dei Turchi is one of the most spectacular natural and characteristic places you can find not only in Italy but all over the world. The scale of the Turks, is in the province of Agrigento. The reef impresses with its unusual bianco candido color, which is in stark contrast to the blue sea and sky and the strange “wave” that decorate it.
Scala dei Turchi is composed of an argillaceous rock, it is not so uncommon to see tourists are covered with white mud thinking of obtaining a benefit for the skin!
Scala dei Turchi is within an area that includes some of the most beautiful coastal areas of Sicily and now recognized worldwide. In it are contained also some flaps of stain wrecks Lygian cedar.
The Turkish Steps is part of the SCI ITA 040015.
The SIC “Scala dei Turchi” with a surface area of ​​30 hectares, is framed in the Mediterranean biogeographical region.
The area of ​​the SIC, which falls in the province of Agrigento, covers the territory of the municipality of Realmonte.
The landscape is characterized by steep cliffs consist of limestone and marl in globigerine, as well as clay gullies and extended sandy shores.

The old internal stain communities have often been eliminated by human action and modest flaps are now represented by shrub species such as Pistacia luìentiscus, Asparagus horridus, Phillyrea media, PrasiumMajus, Rubia peregrina, but primarily by some stain wrecks open to Juniperus turbinata. On outcrops clay ravines are also present comunitàarbustivea Salsola verticillata (Pegano-Salsoletea), as well as grasslands Lygeum. spartum and pratrelli terofitici halophilous.
In the area they are also found in secondary shrublands and grasslands Calicotome infests terofitico character. Along some watersheds are nuclei reed Phragmites communis, a tamarisk.
characteristic elements of the area are the impressive cliffs in terms of landscape, costitute marly limestone and marl globigerine and the characteristic bright white color, as well as clay and casts virtually inaccessible sandy beaches. Overall the site has high value both from a landscape aspect that under the purely natural. They are also represented some species of orchidologica Sicilian flora endemic character.
The typical shape of the cliff steps, also known to have been immortalized in the Montalbano Commissioner film by Andrea Camilleri, is linked to a separate erosion process by atmospheric agents which tend to erode more easily the most tender marly levels, leaving more prominent the most persistent and resistant limestone levels.
The sea waters are crystal clear so that you can see through the waters of the flora and fauna movement.
The rock and the whole landscape of Scala dei Turchi instead take on so many different faces, depending on the time of day: in broad daylight, in the hottest hours, the rock becomes white and the blue sea sparkles in the sunlight.
During the sunset instead of the plate it takes on a pale red color while at night to dominate are the moonbeams that blend with the candor of white marl.
Called geologically and geographically ‘Punta maiata’, the site is commonly called Turkish Steps to popular belief that in times past would have been a convenient landing for Arab ships were going to do plunder the coast of Sicily.
The reference is to the Turks in general reality, as this term in Sicilian dialect, roughly indicates all peoples from North Africa and Muslim.
Also the word “ladder” that recalls the characteristic shape of a “stepped” Rock is probably an alteration of the Arab word “Kalla”, meaning “a place sheltered from the wind” or “port.”
According to historical reconstruction, the foundation of Realmonte would take place after the Battle of Lepanto in October 7, 1571 ie after the defeat of the Arabs at the hands of Christians and then after reduction of their raids.
For this reason, in previous centuries, the Scala would be only a “foothold” for the pirate gangs. But not only.
According to the documents, it was precisely the ships of the Sicilian government to storm the Saracens. “There was a vice-regal provision that those who captured a turkish, it automatically became owner” says Dr. Giovanni Gibilaro, historian and researcher “from which the famous Sicilian saying: ‘cu seize a Turcu is so’ (who manages to capture a turkish takes him into slavery) said on occasions when confusion reigns and anarchy so everyone He is trying to get by as he can.”