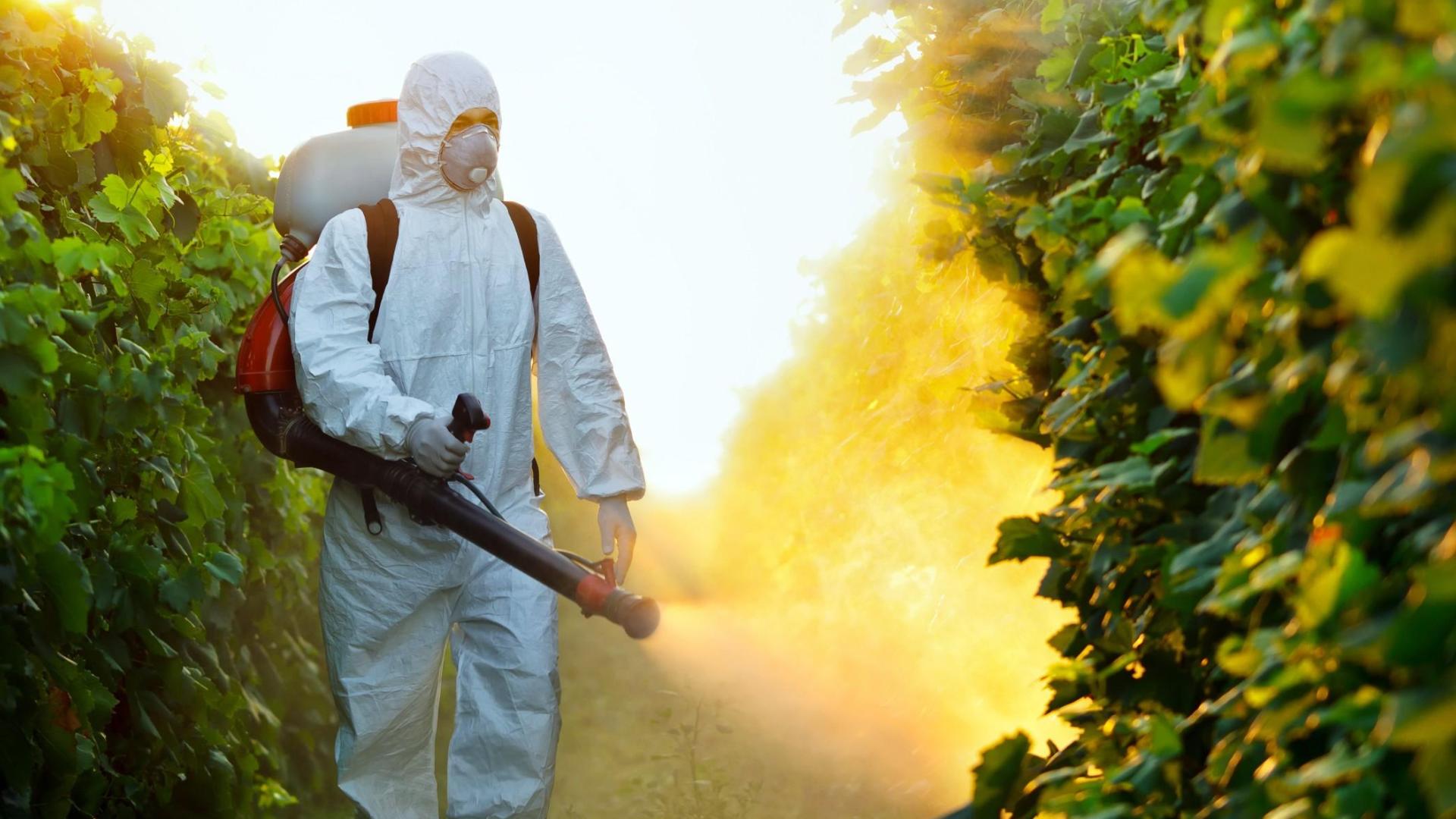 What is the Glyphosate?
Glyphosate, or glyphosate, English glyphosate (N- (phosphonomethyl) glycine, C3H8NO5P), it is an analogue aminofosforico Glycine, inhibitor of the enzyme 3-fosfoshikimato 1-carbossiviniltransferasi (EPSP synthase) known as total herbicide (non-selective) . The chemical compound has become free production in 2001, the year of expiry of the relevant patent production, until then belonged to Monsanto Company.

Glyphosate is a systemic herbicide for non-selective post-emergence (phytotoxic for all plants). Unlike other products, it is absorbed through the leaves (systemic product), but subsequently moved to any other location of the plant due mainly phloem. This gives the fundamental feature of importance to be able to also devitalise the underground storage organs of weeds, such as rhizomes, fleshy taproots etc., That in any other way may be devitalized.
The absorption of the product takes place within 5-6 hours, and the desiccation of the vegetation is visible usually after 10-12 days. Glyphosate is a strong chelator, which means that immobilizes the critical micronutrients, making them unavailable to the plant. It follows that the genetic nutritional efficiency of the plants are deeply compromised.
Glyphosate is one of the most widely used herbicides in agriculture, the active ingredient of the commercial product Roundup, which Monsanto has held the patent production until 2001. It is normally associated to crops, such as soybeans, genetically modified to resist doses copious herbicide. To date, it appears to be the world’s most used herbicide in agriculture.
The research on glyphosate in agriculture began in the fifties, but its commercialization through the product Roundup by Monsanto started in 1974 in the United States. Roundup was used as a tool to free from weeds arable fields. Later, this herbicide has started going steady with genetically modified seeds (GM) to resist the herbicide. The US government in two decades, has sprayed on 1.6 million hectares of poppy plantations in Colombia (an area the size whole of Calabria) to counter the production of cocaine.

The glyphosate in the world –

Today glyphosate is marketed worldwide and the patent expired almost anywhere, including Italy where he is one of the best selling plant protection products. In Europe there are 14 companies that produce it. It is used in agriculture, but also for the care of gardens, green areas and close to the railways to keep clean the tracks. The monthly information consumerista Test-buoy has made the first analysis in our country of 100 foods from cereals (and drinking water) and discovered traces of glyphosate in the paste and other products. The magazine refers to it as “a Russian roulette that can hardly provide businesses and consumers.” The same thing applies to the water. ISPRA A recent report found that in Lombardy and Tuscany, the only two regions where you do the surveys, glyphosate is present in surface water in very extensively. Indeed, it is the main reason for exceeding the limits in these regions.
The report of the Agency for Research on Cancer (the IARC), published in the journal The Lancet Oncology, examined five chemicals used in agriculture: malathion and diazinon, insecticides declared probable human carcinogens; parathion and tetrachlorvinphos, recognized as potential human carcinogens, banned in the European Union but still in use in the United States; glyphosate, the most popular herbicide in the world. Hence the finding of an epidemiological link between exposure to the latter and non-Hodgkin’s lymphoma. With “compelling evidence that it can cause cancer in laboratory animals.” different conclusion from the European Food Safety Authority (the EFSA) that it is “unlikely that glyphosate represents a carcinogenic hazard to humans and provides new levels of security that will make stricter control of residues in food” . The EFSA report, however, has been accused of being largely based on an earlier German study funded by manufacturers of herbicides.
The Argentinean photographer Pablo Ernesto Piovano through a photo shoot of 2014 showed a catastrophe, without appeal, dell’accoppiata GMO-glyphosate, which is the cultivation of genetically modified soy combined with the use of the herbicide (which is resistant soybeans) that contains it .
The Argentine drama began in 1996 when the government decided to approve the cultivation and commercialization of transgenic soy and the use of the chemical compound without conducting any internal investigation, but basing its decision solely on research published by Monsanto. Since then, the land cultivated with GM came to cover 60 percent of the total, and only in 2012 were sprayed 370 million liters of toxic pesticides on 21 million hectares of land, according to the German weekly Die Zeit.
In Italy the use of herbicides is really high, even if the horizon the consciousness of a new class of agronomists, farmers and ordinary citizens is contributing substantially to alter even the mode of production to agriculture which takes account of the ecological balance and social, in addition to public health.
But there is long way to go, especially in regard to honest information and a political class almost entirely been received.

The authorization of Glyphosate in Europe –

After silence, puzzling reports, studies and analyzes misleading the doubts, the EU extends authorization to 31 December 2017. All this while the European Commissioner for Health and Food Safety Vytenis Andriukaitas confirmed that “will extend” the EU authorization glyphosate, the herbicide most widely used in the world discussed. “We follow the legal obligations – explained in the final conference of the EU Council of Agriculture Ministers in Luxembourg – and we have to respect the deadline of June 30, when it will adopt the extension of the authorization of glyphosate.”
Andriukaitas made no secret “to be surprised at the reaction of the Member States, in particular – pointed – for their silence.” The EU partners fact, despite two subsequent meetings, failed to rule – for or against – on the glyphosate dossier. Sources European Commission meanwhile, confirmed that within the executive “a written procedure was launched on the decision to extend the current authorization of glyphosate at 31 December 2017, pending the opinion of the European Agency for the chemical, the ‘ Echa “.

The toxicity of glyphosate on humans –

What causes this substance in those who are exposed (N.B. glyphosate traces have also been found in the blood of people who have never come in direct contact with the herbicide).
• cancers: non-Hodgkin’s lymphoma, cancer of the prostate (malathion) and lung (diazinon), the thyroid, the estrogen-dependent breast, testicular and myeloma;
• Obesity: caused by the depletion of serotonin;
• Alzheimer’s disease: the depletion of phenylalanine causes of tyrosine of dopamine deficiency and then;
• worsening male infertility: caused by the lack of sulfur, for his role in the precursor of cholesterol synthesis of testosterone and the simultaneous lack of zinc;
• Autoimmune diseases, degenerative, diabetes, metabolic diseases, cardiovascular, degenerative, psychiatric disorders such as autism, celiac disease and food allergies: Studies show that feeding chickens with foods that contain glyphosate takes a selection of the bacterial flora so many lactobacilli disappear and appear Clostridium difficilis. Intestinal diseases, intestinal dysbiosis, ie alteration of bacterial flora is at the origin of many diseases.

• birth defects;
• increase in cases of childhood leukemia;
It remains unclear which epigenetic mechanisms will be triggered and how they manifest themselves in future generations but a search of the US nursing mothers in 30% of cases is glyphosate in breast milk at concentrations even a hundred times higher than those allowed in the water for considering it drinkable.

What are the consequences of glyphosate on the environment? –

• many microorganisms and micronutrients (iron, manganese and zinc) essential for the soil have disappeared;
• environmental pollution (especially water) remains in surface water (lakes and rivers) and ground (groundwater) or evolves in its main metabolite (AMPA), of which little is known;
• reduction of biodiversity;
• disappearance of bees and other pollinators;
• spontaneous formation of weed herbicide-tolerant;
• deconstruction of soils resulting in soil loss, landslides, landslides worldwide.
There is no doubt that the issue of glyphosate (and most of the synthetic products used in agriculture), if ever proof were needed, has to reflect the whole world opinion and many engineers, scientists and politicians “distracted” how illogical, both from a scientific point of view and from a humanistic point of view, the alteration of the ecosystem laws for purposes that do not, and can not have, any justification.

We are facing a decisive and binding for Humanity: either walk the ways of Nature, or Nature will close us in any future road.