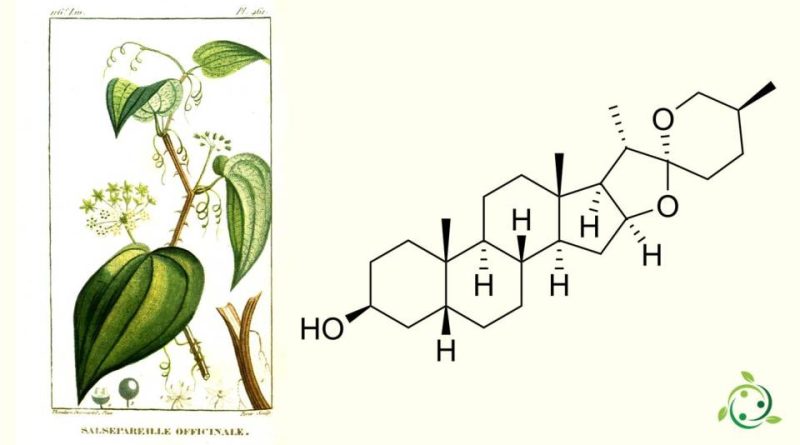 Sarsasapogenin, whose term in the official IUPAC nomenclature is: (2S, 2′R, 4aS, 4bS, 5′S, 6aS, 6bR, 7S, 9aS, 10aS, 10bR, 12aR) -4a, 5 ′, 6a, 7 -Tetramethyloctadecaidrospiro [naphtho [2 ′, 1 ′: 4, 5] indeno [2,1-b] furan-8,2′-oxane] -2-ol, is a steroid sapogenin with brute or molecular formula: C27H44O3.
Sarsasapogenin is a steroid sapogenin, that is the aglycoside portion of a plant saponin and is naturally present in some plants of the genus Smilax, such as Smilax officinalis Kunth and in the roots of many species of monocotyledonous plants.
Sarsasapogenin was one of the first sapogenins to be identified.
Sarsapogenin was first isolated in 1914 from sarsaparilla root. Although it was known to have three oxygen atoms, of which only one is a hydroxyl group, the side chain structure remained unclear for many years. Tschesche and Hagedorn proposed a non-reactive double tetrahydrofuran structure based on degradation studies that indicated an ethereal oxygen atom bound to C-16.
The true nature of the side chain – a spiro acetal ketone – was discovered by Russell Marker in 1939, when he managed to open the six-membered pyran ring with acetic anhydride. Marker found that nearly the entire side chain can be cut in three steps, a process now known as Marker degradation.
The identification of the structure of spirostan, with its spiroacetal ketone functionality, was also fundamental in the development of the degradation of the Marker, which allowed the industrial production of progesterone and other sex hormones from plant steroids.
Sarsasapogenin is unusual in that it has a cis bond between the A and B rings of the steroid’s core, in contrast to the more common trans bond found in other saturated steroids.

This 5β configuration is biologically significant, as a specific enzyme – sarsasapogenin 3β-glucosyltransferase – is found in several plants for the glycosylation of sarsasapogenin.
The (S) configuration at C-25 is also in contrast to other spirostan sapogenins: the epimer with a (25R) configuration is known as smilagenin.
As mentioned, sarsasapogenin has been used as a starting material for the synthesis of other steroids and is also found in the rhizome of Anemarrhena asphodeloides, called zhī mǔ (知母) in traditional Chinese medicine, from which it is commercially extracted.
Sarsasapogenin can be extracted from dried root powder with 95% ethanol. After removal of the fat from the resulting rubber, the glycosidic bond is hydrolyzed with hydrochloric acid (approximately 2 M) and the resulting crude steroid is recrystallized from anhydrous acetone.
Sarsasapogenin has important pharmacological applications.
Sarsasapogenin and its C-25 epimer smilagenin tend to lower blood sugar and reverse diabetes weight gain in experiments on mice with a mutant diabetes (db) gene.
Both steroids also halted the decline of muscarinic acetylcholine receptors (mAChRs) in animal models of Alzheimer’s. In both cases, the effects appear to be specific to the 5β configuration, the cis bond between the A and B rings, since diosgenin (with a Δ5 double bond that can be hydrogenated in the body) had much lower antidiabetic activity ( and no significant effect on mAChR) while tigogenin (the 5α epimer of smilagenin) showed no effect in either study.