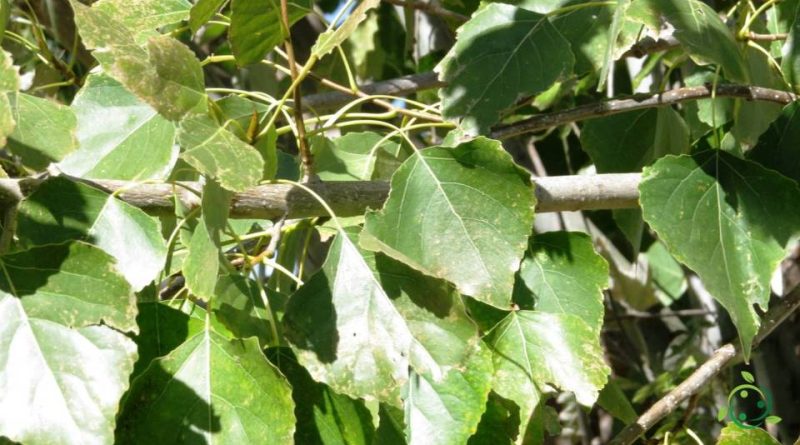 The black poplar (Populus nigra L., 1753) is a tree of the Salicaceae family native to central-southern Europe and western Asian regions.

Suitable breeding habitat –
Black poplar is a plant that grows across a large distribution area across Europe and is also found in North Africa and Central and Western Asia. The range extends from the Mediterranean in the south to about 64 ° latitude in the north and from the British Isles in the west to Kazakhstan and China in the east. The distribution area also includes the Caucasus and much of the Middle East.
In Italy it is widespread everywhere and, due to the favorable conditions, it can reach and sometimes exceed a height of 25-30 m; moreover, it almost always occurs in an arboreal form.
Its growth habitat is along rivers and lakes, in moist, fresh and deep soils, even periodically flooded, but it does not disdain poor sandy and gravelly soils, as long as the water table is reachable from the roots. In these areas it is present from 0 to 1200 m a.s.l., where it forms pure woods of a certain consistency.

Propagation –
Populus nigra is a tree that prefers soils rich in organic matter, light and well drained; they hardly adapt to inconsistent and sterile soils; in nature they prefer wetlands, near rivers and streams, as they do not tolerate long-lasting droughts. For its cultivation, therefore, it is useful to periodically bury a good organic fertilizer at the foot of the plant, at least twice a year.
The plant usually multiplies by cuttings.
In spring, the cuttings obtained are rooted in a mixture of peat and sand in equal parts and the new seedlings must be grown in a greenhouse for at least two years before being planted, as young specimens can sometimes fear the cold and wind .
Furthermore, in autumn the basal suckers can be taken, which usually adult plants develop in large numbers, to be buried in a soft substrate rich in organic matter, to allow for better development.
Propagation can also take place by seed; in this case it is advisable to use numerous seeds as the germinability of the poplar is not very high.
Especially in the early years it is advisable to water the poplars in case of prolonged periods of drought.

Ecology –
The black poplar is a tree with a wide Eurasian-South European distribution present in all regions of Italy where it grows in humid areas but often also in disturbed places, on gravel-sandy to loamy-clayey soils, from sea level to the mountain belt inferior.
It is one of the rarest and most endangered tree species. The main cause of this threat is the destruction of the floodplain areas, its natural habitat. For example, it is currently one of the most endangered tree species in Switzerland. As a result of the perturbations of the alluvial areas mainly due to the construction of embankments, the pumping of water from the aquifers and the extraction of gravel, but also due to the crossings with the hybrid poplar forms, this pioneer species typical of forests riparians in fact risk disappearing.
Like willow, black poplar plays a prominent ecological role, given its rich and diverse and entomofauna. In fact, there are over 500 species hosted by the Populus genus. The Tortrice, the Saperda, the Crisomela, the Bombice or the Sigaraia are just some of the best known species, species of insects to which hundreds of parasitic species of the latter are added.
Furthermore, the large size of the black poplar and the formation of numerous cavities during the last part of its life create in its foliage and trunk habitats appreciated for example by the woodpecker, the black kite, the subbuteo falcon (or lodolaio), or from bats, squirrels or martens. Finally, it is worth emphasizing the far from negligible ability of black poplar to fix the heavy metals present in the soil.
The uses of black poplar wood are relatively limited, not only because its trunks are generally twisted and gnarled, but especially because its own wood keeps rather poorly over time. In the past it was used for the manufacture of boards for bellows used in forges, taking advantage of the fact that its wood did not deform during drying. As in the case of alder and elm, tradition has it that black poplar wood was used for the construction of gallows and was therefore considered a “cursed” wood.
However, an excellent paper pulp is obtained from the wood; it is also used in the manufacture of matches, plywood and chipboards.