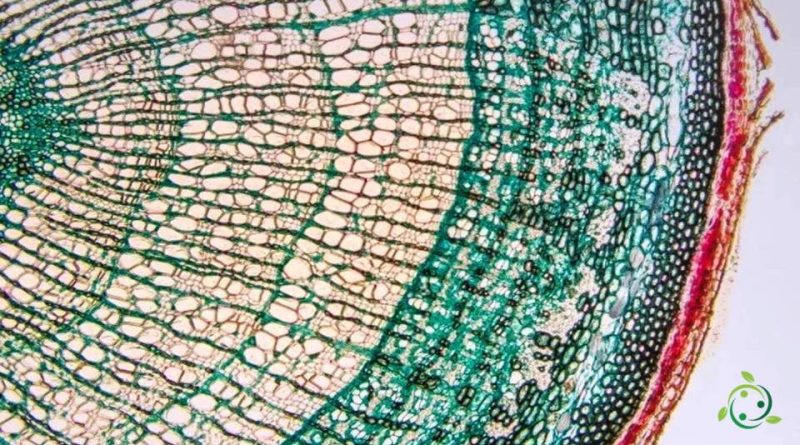 The term meristem, in botany, means an undifferentiated cellular tissue with an intense and high capacity to divide, which allows the plant to grow, generating new tissues.
The term meristem comes from the Greek μερίζειν (merìzein = to divide), in reference to its specific function; the term was first used by the Swiss botanist Karl Wilhelm von Nägeli (1817-1891) in his text “Beiträge zur Wissenschaftlichen Botanik” in 1858.
The meristem is a plant tissue whose cells maintain (or resume after differentiation) the ability to divide by mitosis to originate new cells. Each meristematic cell derives from another meristematic cell. Their function is comparable to that of stem cells in animals.
Meristems are divided into primary or secondary meristems.
The primary or apical meristems are responsible for the lengthening of the stem and roots.
The secondary or lateral meristems (Cambio) are responsible for the secondary growth in the stem and roots of woody dicotyledons and gymnosperms.

Primary meristems –
Primary meristems are made up of small cells (10-15 micrometers) which maintain their “embryonic” characteristics. These are isodiametric and remain completely close to each other (without intercellular spaces); they have a wall consisting of the median lamella and the primary wall, are rich in cytoplasm, usually lack vacuoles and are equipped with very large nuclei. The reserve substances are practically absent, while there are numerous ribosomes and mitochondria (100-150 mitochondria per cell), small (1-2 micrometers) and with little developed crests. There are proplastids and not yet differentiated plastids. The task of the primary meristems is to make the plant grow in length (height).
These, according to their localization, are defined as:
– apical meristems those located in the apexes of the stem and root;
– intercalary or residual meristems if they are distributed among the definitive adult tissues (eg at the level of the nodes in the stem of the Poaceae where they contribute to the rapid growth of the stems or to regrowth following damage);
The apical meristems differentiate by originating still meristematic tissues, which depending on their position within the organs will originate the adult tissues. These fabrics are:
– fundamental meristem, which originates the medullary parenchyma;
– protoderm which gives rise to the tissues of the epidermis;
– prochange that develops vascular tissue (primary xylem and phloem).

Secondary meristems –
The secondary meristems have in common with the primary ones the capacity of cell multiplication by mitosis and of production of cells destined to become adult, but the cellular structure and arrangement are very different from the primary meristems; the differentiations concern:
– larger dimensions, elongated shape along the longitudinal axis of the organ and flattened;
– walls, made up of hemicelluloses and pectins, not all alike: the thicker radials than the tangential ones;
– widely vacuolized cells;
– not very voluminous nucleus, elongated along the major axis of the cell.
The division of their cells takes place according to planes that remain parallel to the surface of the organ (stem or root), giving rise to its growth in thickness.
In turn, two types of secondary meristems are distinguished:
– the cribro-vascular cambium in internal position from which the conductive tissues are formed, ie secondary xylem and phloem;
– the suberofellodermic or phellogenic cambium, placed in an external position from which the rind originates, or the set of tissues that covers the stems and roots in their woody portion (secondary structure).
Other non-cambial secondary meristematic tissues are adventitious meristems and meristemoids. Adventitious meristems are responsible for the formation of scar tissues and adventitious roots, which originate from the stem. Meristemoids originate, for example, stomatal cells within the epidermis.

Induction of Meristems –
Mature and live plant tissues can be induced by various kinds of stimuli to actively resume cell division, which presupposes a return of the cells to the meristematic condition. It is thus possible to have, under the stimulus of animal and vegetable parasites, the appearance of certain meristems which produce, for example, galls; or of indeterminate meristems that produce tumors with indefinite growth. In these cases, the host’s metabolism is altered in order to partially or totally modify the development plan. With artificial stimuli, cell division can be induced in sterile cultures of plant tissues, in which, with other stimuli, the organotypic development of culture calluses can be provoked and controlled.