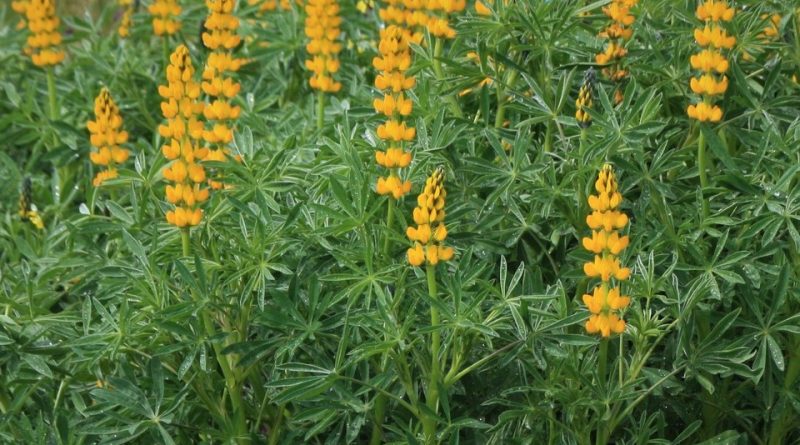 The annual yellow-lupin or European yellow lupin or yellow lupin (Lupinus luteus L.) is a herbaceous species belonging to the Fabaceae family.

Etymology –
The term Lupinus comes from lúpus lupo, assonant with the Greek λῡπη lūpe pain, suffering and with λέπω lépo flaying: probable meaning of plant for wolves as toxic.
The specific epithet luteus comes from yellow lúteus: yellow in color.

Geographic Distribution and Habitat –
The yellow lupine is a plant present mainly in America, but albeit in modest numbers, also in the Mediterranean area where, spontaneously, it is widespread in the coastal area in the western part of the Iberian Peninsula, in Morocco, Tunisia and Algeria, in the islands of Corsica, Sardinia and Sicily and in southern Italy. It is very likely that in Israel and Lebanon it went wild.
It is grown in northern Europe and the CIS (Belarus and Ukraine) as well as, on a smaller scale, in Western Australia and South Africa. Having previously been cultivated in southern France and Madeira, it has naturalized in these areas.
In Australia it is considered an invasive species.
Its habitat is that of warm-temperate or even tropical climates where the cultivation is located at high altitudes and cannot bear the cold and especially snow, where it grows on sandy and volcanic soils of the mining belts. 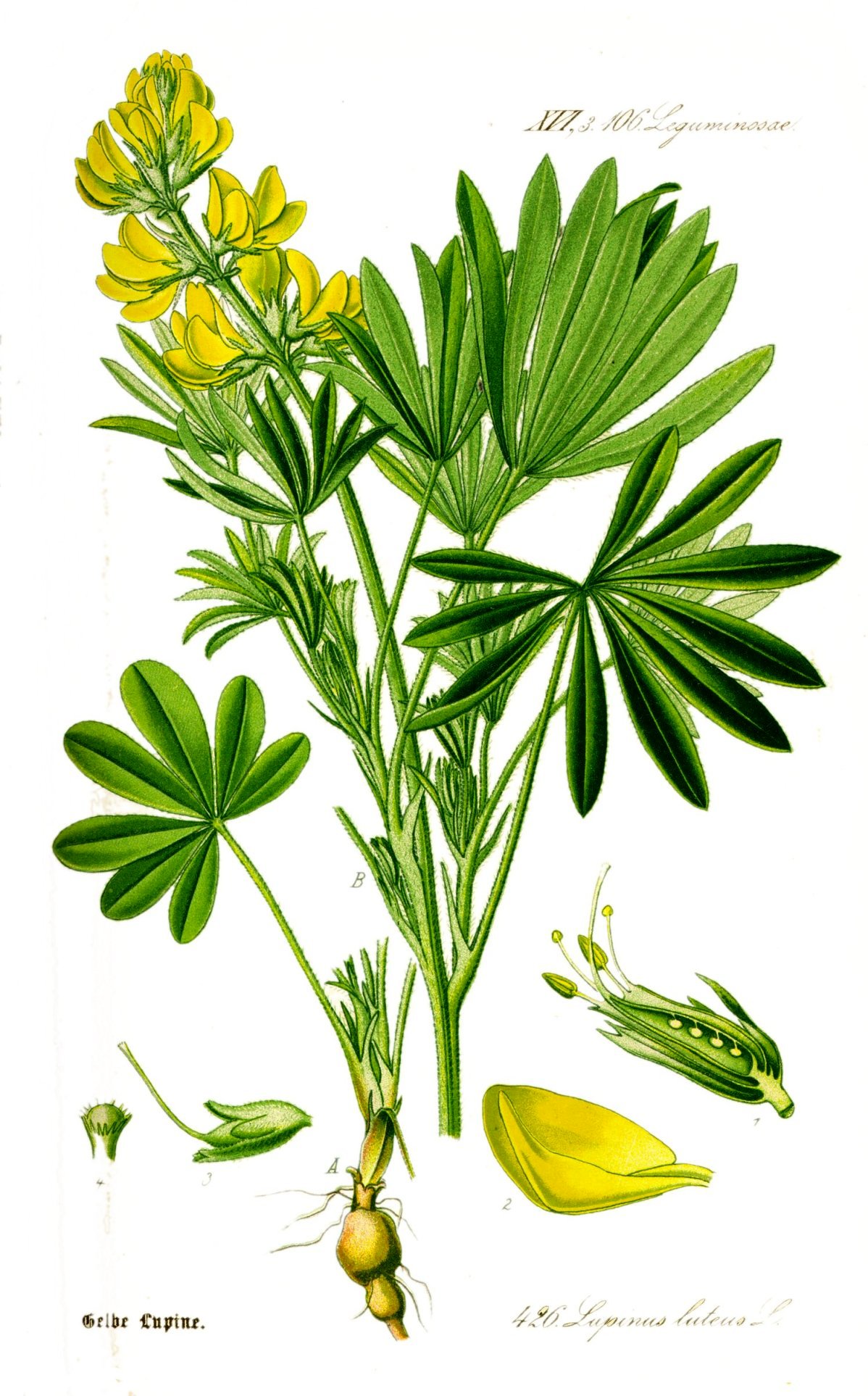 Description –
The yellow lupine is an erect annual plant, which grows up to 1.5 m, little branched and pubescent, has a robust, taproot root and rich in root tubercles due to the Rhizobium symbiont.
The leaves radiate from a single point, they are lanceolate.
The flowers are gathered in apical racemic inflorescences of an intense yellow color.
The fruits are legumes 40-60 x 10-12 mm, shaggy-woolly, with 4-5 seeds, 6-9 x 5-8 x 3-4 mm, quadrangular-rounded, compressed, from white-cream, brown to almost black, smooth head.

Cultivation –
Lupinus luteus is a plant that in many areas grows spontaneously but also grown with autumn sowing in regions with a temperate climate and in spring in the mountains.
This plant is sometimes harvested in nature for local use as a food. Low-alkaloid varieties have been developed that are sometimes grown for their edible seeds, while the plant is also grown as a green manure to improve the soil and is commonly grown as an ornamental in gardens.
It is a plant that prefers acidic and light soils where it can be cultivated, in the temperate climate zones, even at higher altitudes (from 2,000 – 3,300 meters) while in the tropics it grows best in areas where the annual daytime temperatures are between 18 – 24 ° C, but can tolerate 6 – 30 ° C.
The plant can survive occasional temperatures down to around -3 ° C. It prefers an average annual rainfall in the range of 450 – 1,000 mm, but tolerates 350 – 2,100 mm and in a sunny position.
In general it is an easy plant to cultivate, which grows in any moderately good and well drained soil, even if, in its spontaneous state, it prefers acid and sandy soils; it is highly susceptible to iron and manganese deficiencies when growing on neutral and calcareous soils.
From the pedological point of view, in fact, it prefers a pH in the range 5.5 – 7, tolerating 4.5 – 8 and tolerates short periods of flooding of the soil.
It is often grown as a green manure and ornamental, the plant is sometimes also grown for its edible seeds, mainly in some parts of Europe. There are a number of cultivars that have been developed with low-alkaloid, sweet-tasting, larger, and softer-skinned seeds.
Propagation occurs by seed and plants begin flowering around 100 – 115 days after sowing, with seeds maturing in 100 – 135 days.
Before sowing, however, it is advisable to soak the seed for 24 hours in warm water, sowing in the spring in the open field.
Germination should take place within 2 weeks; moreover, the seed can also be sown in the open field until the beginning of summer as a green manure crop.
Seed yields range from as low as 290 kilos per hectare in parts of Africa to 4.5 tonnes in Australia.
This species has a symbiotic relationship with some soil bacteria, these bacteria form nodules on the roots and fix atmospheric nitrogen. When removing plant remains at the end of the growing season, it is best to remove only the aerial parts of the plant, allowing the roots in the soil to rot and release their nitrogen.

Customs and Traditions –
Lupinus luteus is a plant that has been known for some time and which plays a particularly important role in floriculture and livestock nutrition worldwide.
It is a plant in progressive abandonment in its uses so much so that its seeds were once a common food of the Mediterranean basin and Latin America. Today they are mainly eaten as a pickled snack.
This species, like other congeners, (especially the seeds) contain a series of bitter-tasting alkaloids such as: anagyrine, sparteine ​​and hydroxylupanine. The pharmacological effects of these alkaloids tend to block ganglion transmission, decrease cardiac contractility and contract uterine smooth muscle.
If ingested in moderate to large quantities they can cause symptoms such as respiratory depression and slow heart rate, sleepiness and seizures.
Levels of alkaloids can vary greatly from species to species and this species is considered to be one of the most toxic. However, low alkaloid and sweeter tasting varieties have been developed that are grown as a food crop. There are also techniques (in particular soaking and discarding soaking water) that lower alkaloid levels. Low alkaloid varieties were developed before 1930.
However, in their consumption, particular attention must always be paid.
Among the edible uses are used cooked seeds which are also consumed in brine or as cooked beans.
The seed can also be ground into a powder and mixed with cereal flours to make bread, etc.
To eliminate the bitterness of the seeds, it is recommended to immerse them with 2 or 3 changes of water.
The seed was once roasted as a coffee substitute.
Young buds with leaves can also be eaten, cooked and eaten as a vegetable.
There are no known medicinal uses.
Other uses include agroforestry as it is an excellent plant for green manuring in poor soils; it has a fairly rapid growth and fixes atmospheric nitrogen well.
The plant is grown mainly as a soil improver in southern Europe and is also a good plant for bees and other pollinating insects.
Among other uses, it should be noted that a seed extract is used as an ingredient in commercial cosmetic preparations as a masking agent and skin conditioner.
Furthermore, the water used to leach the alkaloids from the seeds of the bitter forms of this plant is rich in alkaloids and can be used as an insecticide.
From an ecological point of view it should be noted that the plant is classified as “Least Concern” in the IUCN Red List of Threatened Species (2013).

Preparation Method –
The yellow lupine is a plant that, when properly used, can find a real use in the food sector.
Cooked seeds are also consumed in brine and can be ground into a powder and mixed with cereal flours to make bread, etc.
It is advisable to immerse them in water with elimination of the water for 2 or 3 times.
The seed was once roasted as a coffee substitute.
Like a cooked vegetable, you can also eat young buds with leaves.