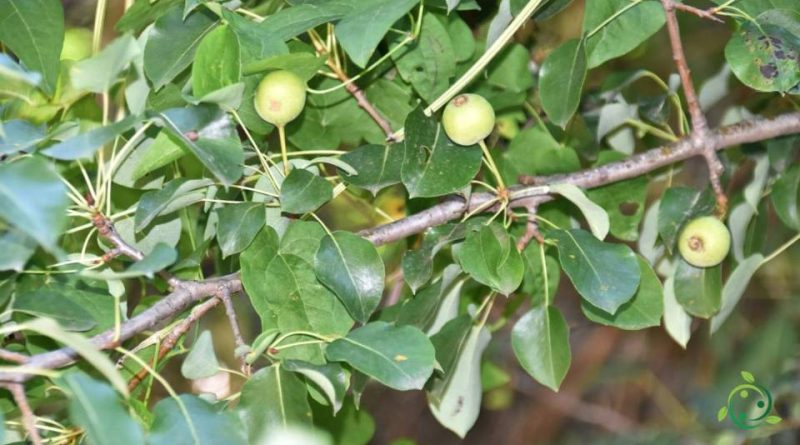 The European wild pear (Pyrus pyraster (L.) Burgsd.) Is a plant of the Rosaceae family.

Suitable breeding habitat –
The Pyrus pyraster, together with the Pyrus caucasica is the progenitor of the common cultivated pear (Pyrus communis). However, it is often difficult to distinguish the perastro from the common pear. The area of ​​origin of the Pyrus pyraster goes from Central-Western Europe to the Caucasus. It is not found in Northern Europe.
Its natural habitat is often deciduous forests, where it grows at altitudes that can reach up to 1400 m. s.l.m. in the more southern areas, and it blooms and sheds its leaves at the same time from April to June and can even reach 150 years.

Propagation –
The wild pear is a plant that in order to grow and be cultivated requires cool-temperate climates, characteristic of its native area, where it is found both in the plains and in the mountains, up to 1400 m.
Like the common pear, it grows both in acidic and lightly textured soils such as the low Alpine slopes and in sub-alkaline soils closest to the Mediterranean, provided they are rich in organic substance.
Propagation can occur by seed.
Sowing must be done in an unheated seedbed as soon as the seed is ripe, in the autumn period; the seed tends to germinate from mid to late winter. The stored seed requires 8 to 10 weeks of cold stratification at 1 ° C and should be sown as early as possible during the year.
It should be remembered that temperatures above 15 – 20 ° C induce a secondary dormancy in the seed.
Once sprouted, it is necessary to wait for the young plants to reach a manageable size. At this point they must be placed in individual pots where they will be grown, in a sheltered place, for their first year.
The transplant must then be carried out in the spring or, at the latest, at the beginning of the summer of the following year.

Ecology –
The wild pear, as mentioned, is a very rare tree in nature and is the ancestor of many varieties of cultivated pears. In fact, in some countries it is on the list of endangered species.
In nature it grows in broad-leaved woods or shrubs between 0 and 1400 m a.s.l.
We can find it in the warmest and most nutrient-rich locations in Central Europe. It provides important ecological benefits for the animal world. Insects love the nectar of its flowers, while hedgehogs, dormice, stone martens and badgers love its fruit.
From this tree a particularly appreciated wood is obtained, very heavy, not very elastic, characterized by a reddish color, especially sought after for carving and turning. The fruits are much smaller and firmer than those of the cultivated pear, but they have a sweet and aromatic flavor.
In mythology, the wild pear is also often the tree that attracts dragons, demons and witches.