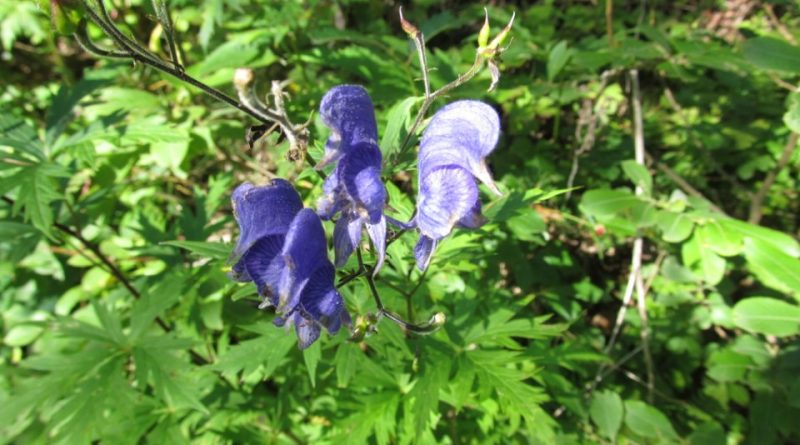 The Degen’s Aconite (Aconitum degenii, Gáyer, 1906) is a herbaceous species belonging to the Ranunculaceae family.

Etymology –
The term Aconitum is the ancient Latin name in Virgilio et al. from the Greek ἀκόνιτον acóniton used by Theophrastus and Nicander for the poisonous aconite. The etymology of the Greek name is very controversial: according to Gledhill it derives from the name of a hill in Pontus; for others from Acona, a village in Bithynia where the plant was widespread; another theory derives it from ἀκόντιον acóntion dardo or javelin, the tip of which was poisoned with the extract from the plant and others that seem imaginative and without foundation.
The specific epithet degenii was attributed in honor of the Hungarian biologist and botanist Árpád von Degen (1866-1934), author of a Flora del Vebelit.

Geographic Distribution and Habitat –
Aconitum degenii is a perennial herbaceous plant native to the Carpathian mountain range.
This species is widespread in the mountains of southern Europe and in Italy present throughout the Alps, except perhaps in Val d’Aosta.
Its habitat is that of broad-leaved woods, especially beech woods, in gorges, clearings and high grass consortia, on soils rather rich in nitrogen compounds, with optimum in the mountain belt. The preferred substrate is both calcareous and siliceous with neutral pH, with medium humidity. This plant grows at altitudes between 300 and 2000 m a.s.l. 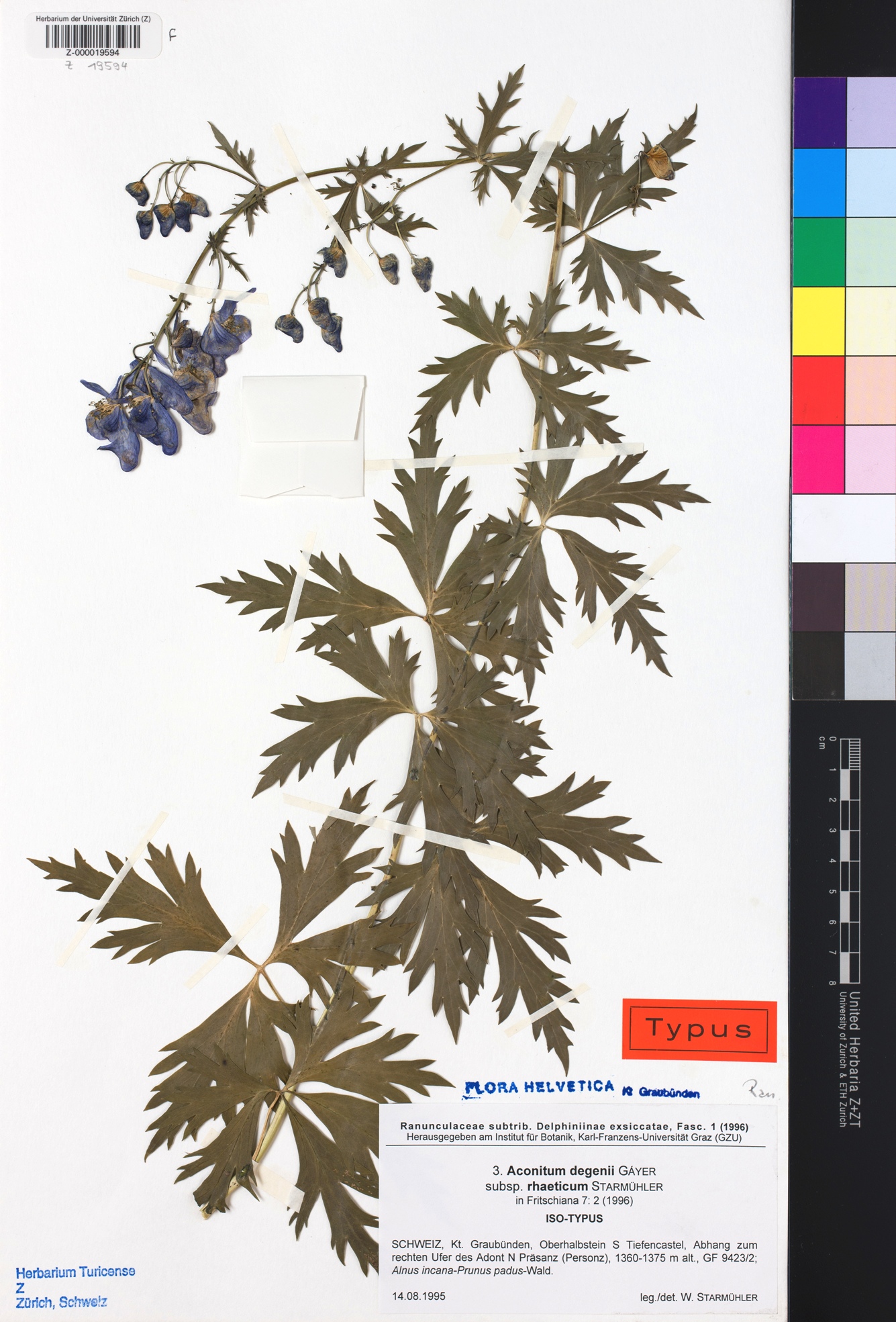 Description –
Aconitum degenii is a perennial herbaceous plant whose height can be from 5 to 12 dm. During the adverse season it does not present aerial organs and the buds are found in underground organs such as rhizomes, an underground stem from which, every year, aerial roots and stems branch off.
The roots are secondary to rhizome.
The epigeal part is erect and is ascending, cylindrical and glabrous up to the inflorescence, after which it becomes glandular.
The basal leaves are in the shape of a pentagonal lamina, completely divided (up to the central rib) into 5 segments. The segments have a rhombic shape (they are 1/3 of the length wide) and are departed (divided) and then in turn (the final segments) still deeply toothed. The petioles are erect. The length of the petiole is 1 – 2 dm and the diameter of the pentagonal lamina is 1 – 2 dm.
The cauline leaves are arranged alternately and are progressively smaller with fewer segments and the petioles also progressively reduced.
The inflorescence is terminal pani culata with a zig-zag axis. It is both branchy and leafy especially at the base. The branches are divaricato-subpatenti and pauciflori; they also appear pubescent-glandular (the flowers are also pubescent). At the branching of the branches there are some bract-type leaves. The flowers are spaced apart and pedunculated; the length of the peduncles is less than the flowers themselves (length of the peduncles: 1 – 2 cm).
The flowers of this plant are considered archaic, or at least derived from more archaic flowers with an acyclic structure. The perianth is formed by two verticils: the external elements have a protective function and are called tepals or sepals (the distinction of the two terms in this case is ambiguous and therefore subjective); the internal ones are nectars (in this flower the corolla is practically absent). The flowers are pentamers (five elements) with zygomorphic (or bilateral) symmetry. The color of the perianth is blue or violet and the size of the flowers varies between 25 and 35 mm.
The chalice has five petaloid sepals (or tepals), very different from each other, of which the upper has the shape of a helmet or helmet with a hemispherical geometry with a beak-shaped extension at the base. Of the other sepals, two have an oval-shaped lateral arrangement; the two lower ones are more linear and lanceolate. The sepals are not persistent to fruiting. The helmet is 0.6 – 1.0 times higher than it is wide. Helmet dimensions: height 16 mm; width 15 mm. Size of the elliptical side petals: 10 x 15 mm.
The corolla is practically absent; the inner petals 2 (rarely 5) are leaves transformed into producers of nectar and have a slightly club-like spiraling cylindrical shape (hammer-like) and are curved forward at right angles.
There are numerous stamens, dark in color, available in spirals.
In the gynoecium the carpels are sessile and spiral, in number of 5 (rarely less). The pistils contain 10 to 20 eggs.
The antesis is from June to August.
The fruit consists of an aggregate of 5 capsules or sessile follicles and polysperms (dry fruit developed longitudinally with slits for the release of the seeds). Each follicle ends in a straight beak.

Cultivation –
For the cultivation of Aconitum degenii, it should be borne in mind that it is a very rustic plant that resists temperatures below zero and prefers full sun to partial shade exposure. As for the soil, they prefer moist and fresh soils of a calcareous or siliceous nature but with a neutral reaction.
The pollination of this plant is guaranteed above all by various insects, such as bees and wasps as they are nectar plants (entomogamous pollination).
Reproduction occurs both through pollination of the flowers (see above), but also by division of the foot (typically horticultural propagation).
Therefore it can be propagated both by gamic way and therefore by seed or by agamic way by separation of stems.

Customs and Traditions –
Aconitum degenii is a plant that, in ancient times, was used in folk medicine for its pain-relieving, sedative and calming effects.
It should be remembered, however, that this plant, like all species of the genus, contains several alkaloids including aconitine, a powerful poison, lethal even at very low doses: the symptoms are severe heat in the throat and belly, dry tongue, vomiting, diarrhea, muscle weakness, arrhythmias up to cardiac arrest.
In addition, intoxication is very rapid: in a period between 10 and 90 minutes after ingestion, symptoms such as palpitations, difficulty in breathing, tachycardia, nausea, abdominal pain and vomiting appear. About 3 grams of aconitine can lead to an individual’s death within hours.
Attention, however, also to dermal contact. If you touch leaves and flowers, at the level of the hands, problems such as itching, sensory and sometimes even motor disturbances can arise.
The different species were in fact used to poison arrowheads or prepare poisons.
Its flowers are among the most toxic of the Italian spontaneous flora.
Among its uses it should be remembered that this plant is grown mainly for its ornamental flowers thanks to the elegant contrast between the flowers and the rich and decorative foliage.

Preparation Method –
Aconitum degenii is a plant that was once used in folk medicine for its pain-relieving, sedative and calming effects; however, the presence of the alkaloid aconitine makes it one of the most toxic plants of the Italian spontaneous flora, which is why it is not recommended for its artisan use and great care is also taken in handling the plant.
The plant is also used in gardening for its colorful flowers and rich vegetation.