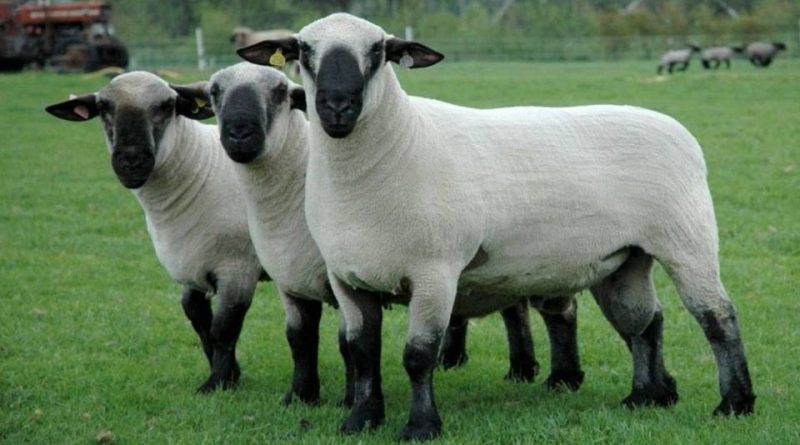 The Hampshire sheep breed is a sheep (Ovis aries Linnaeus, 1758) originally from southern England, from the county of the same name, with a main aptitude for meat production.

Geographic and Area Distribution –
The Hampshire sheep breed is one of the most common beef breeds in England and is also widely bred in the United States.
This breed is bred, however, in several countries, including Russia and Germany.
In England the original breeding was that of the counties of Wiltshire and Hampshire and other regions, at the beginning of the nineteenth century, from where they then spread to other countries.

Origins and History –
The Hampshire sheep is a breed that originated around 1829 from a cross of Southdowns with the Old Hampshire, Wiltshire Horn and Berkshire Nott breed, all white-faced sheep with horns; these are breeds that were raised outdoors, uncultivated, in the hilly areas of Hampshire.
In 1829 a Hampshire farmer crossed his herd of the then Hampshire breed with Cotswold rams. The resulting mestizo rams were compact animals and were sold from around 1835 to become the UK’s first recognized Hampshire Down herd group. An important flock was kept at Downton Agricultural College in the late 19th century.
The rams resulting from these crossings had good proportions and the lambs were large and were usually weaned early and fed for the market. In fact, Hampshire can be considered a larger, somewhat coarser and more resilient Southdown. The breed was occasionally crossed with the Cotswolds, producing a more valuable wool for worsted makers than pure Cotswold. In addition to Southdown, Hampshire therefore has some Cotswold blood in its composition. Notable imports of the breed were made to the United States in the 18th century, but it did not become as popular as the Southdown and some other English breeds.
In the 1860s the Hampshire was introduced to the United States, but the breed disappeared during the Civil War and was not reintroduced until the 1880s.
The Southdown breed, of origin, was characterized by long legs, dark brown or black, which matured early, with rams of excellent characteristics and a medium wool of excellent quality. The original Hampshire was larger, rougher, but slower to mature, with inferior flesh and longer but rougher wool. The Southdown breed has the characteristic of transmitting its qualities to offspring from other species.
The horns of the original race have disappeared; the muzzle and legs have become dark, the structure has become more compact, the bones smaller, the back wider and straighter, the legs shorter, and the meat and wool of better quality, while the superior strength and the larger size; the big head and nose of the old race remained.

Morphology –
The Hampshire is a large breed of sheep with a medium length fleece.
It has a black face like the extremities of the limbs. The rest of the body is white.
The breed is hornless.
Mature rams can weigh up to about 135 kg and sheep up to about 80 kg when pregnant.
Mature sheep produce on average 2.7 kg) to 4.5 kg of fleece ranging from 25.0 to 33.0 microns. The length of the fleece staple is 5-9 cm with a yield from 50% to 62%.

Productive attitude –
The Hampshire sheep breed is bred mainly for meat production, with fast-growing lambs that are characterized by a lean carcass when ripe.
It is a breed widely used in crossbreeding programs due to their large, lean carcasses and rapid growth rate.
Furthermore, the wool obtained is mainly used to make knitwear.
In general it is a breed with excellent parameters of early maturity of the lambs, high percentage of wool yield after washing, easy adaptation to different climatic conditions and fast development.
The only drawback of animals is not too high fertility. A disadvantage to be considered before starting the breeding of these animals.
Sheep, however, are considered to be very obedient animals, characterized by a pronounced herd instinct. In summer it is advisable to graze them on the pastures. In the winter season, animals need an isolated room, with full ventilation but at the same time, there should be no drafts in the room. It is advisable to start adapting the sheepfold for the winter in mid-autumn. Do not postpone this question when the cold arrives.
At the same time, it is important to insulate the walls, make a power supply and organize a full-fledged ventilation system. It is important to make sure that the room temperature is at least +6 degrees. During the lamb period, the temperature should be at least +15 degrees.
The weak point of these sheep are the hooves. Therefore, it is advisable to make the floor of the room homogeneous and flat and that it should be covered with straw bedding. Regular cleaning and trimming of the hooves is essential. If this is not done, there is a high probability of joint problems.