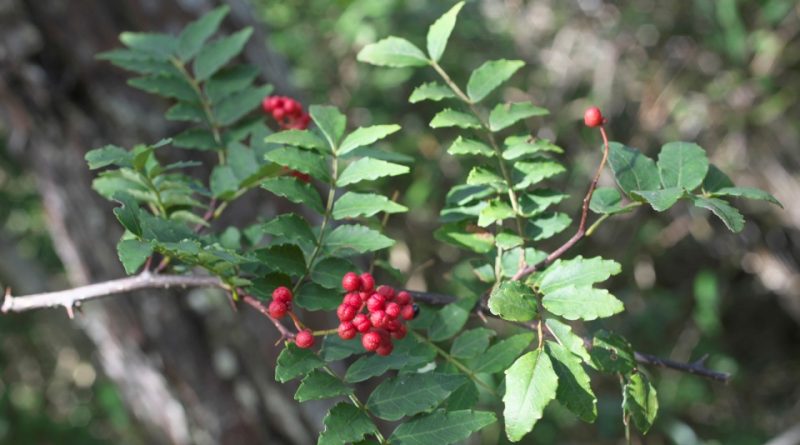 Etymology –
The term Zanthoxylum comes from the Greek ξανθός xanthós yellow and from ξυλον xylon wood: yellow wood, due to the color of the heartwood of the roots of some species of this genus; the name of the genus replaces the original one of Xanthoxylum as an illegitimate result.
The specific epithet piperitum comes from piper pepe (πέπερι peperi in Greek): peppery, spicy.

Geographic Distribution and Habitat –
Japanese pepper is a plant native to an area extending from Hokkaido to Kyushu in Japan, the southern parts of the Korean peninsula and mainland China.
Its natural habitat is that of environments with humid soils, typical of the undergrowth of low-altitude forests. 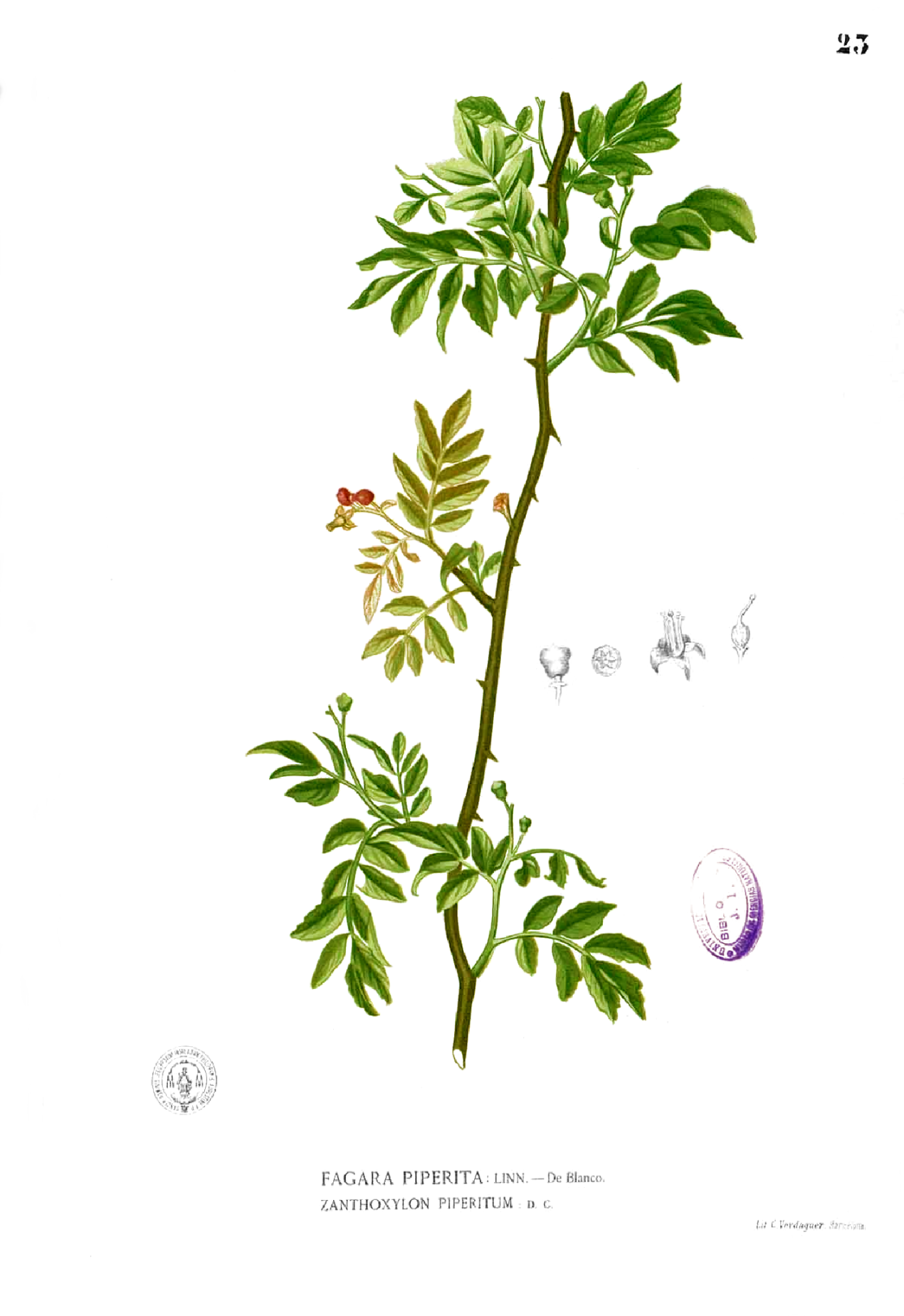 Description –
Zanthoxylum piperitum is a dioecious plant that grows in the form of a deciduous aromatic thorny shrub or small tree.
The branches bear pairs of sharp thorns.
The leaves are composed in a strange and pinnate way, arranged alternately, with 5〜9 pairs of ovate leaflets having crenate (slightly serrated) margins.
The flowers are carried in clusters of axillary flowers, of about 5 mm and of a yellow-green color.
Those of the male plants can be eaten as hana-sanshō, while the female flowers produce berries or peppercorns of about 5 mm.
The tree blooms from April to May.
These berries ripen in the fall and turn scarlet and dehiscent by scattering the black seeds.

Cultivation –
Zanthoxylum piperitum is a widely cultivated plant especially in Asia and Japan where the prefecture of Wakayama boasts 80% of the national production.
However, the plant can also be cultivated in other temperate areas, such as in Italy, as it tolerates both great summer heat and peaks of cold up to about -15 ° C.
For its plant it should be placed in full sun, but it can also be well in partially shaded places.
From the pedological point of view, it prefers neutral or alkaline soils, not acidic, deep, fertile and well drained as it can withstand water stagnation; moreover it must not suffer from drought for prolonged periods.
For this reason, especially from mid-spring to summer, it is necessary to irrigate, making sure that the soil is kept moist.
As for the fertilizations it is good not to exceed in those nitrogenous or excessively organic in order not to generate an excessive vegetative growth to the detriment of the quality of the berries.
As for pruning, these must be done in early spring by removing dead or damaged branches; in the same period you can do containment topping, cutting the young branches just sprouted by at least 15 cm.
Reproduction is by sowing. In the autumn period the ripe fruits, now black, are removed and the pulp surrounding the seeds is eliminated.
The latter must then be buried to a depth of a few millimeters in a soil filled with a mixture made half of sand or perlite and half of fine sifted soil.
After a year, the new plants can be moved to the open ground at the beginning of summer.
It can also be propagated through semi-mature wood cuttings, in the period of July / August in a shaded area, or through root cuttings, 3 cm long, planted horizontally in pots and in greenhouses.
The planting of the seedlings must be carried out in spring or, in more temperate areas even in autumn.

Preparation Method –
Zanthoxylum piperitum is a plant, as mentioned, used both in food and medicine.
In the kitchen it is used as the traditional pepper with respect to which it is distinguished by a pleasant but not too intense lemon flavor, and by the characteristic sensation of “numbness”. An aromatic oil can be obtained from the drug, which is also widely used in cooking.
In traditional Chinese medicine, the pericarp is used above all, but in some cases, also the leaves and flowers. Timur – Nepali name – is a remedy for various stomach or digestive problems, mixed with garlic cloves and mountain salt in warm water.
As we have already said, Japanese pepper consists of the outer shell of the fruits produced by some shrubs of the Genus Zanthoxylum. It is a spicy spice characterized by hints of lemon and which leaves a typical feeling of numbness. Although the chemical, organoleptic and taste characteristics of the various species of the genus Zanthoxylum can vary considerably, most share the same essential properties – Z. simulans and Z. piperitum are often, but erroneously, used as synonyms. Sichuan pepper is mainly consumed whole while abroad it is ground into powder; for certain recipes it is recommended to toast the drug before adding it to the finished food.
Sometimes accompanied with garlic, ginger – fresh or dry – or star anise, Japanese pepper is used to flavor various fishery products, meats – avian like chicken, duck and pork – vegetables – onion, eggplant etc. The many types of Japanese pepper appear in the cuisine of: China, Tibet, Bhutan, Nepal, Thailand, Korea, India (the Konkani and Uttarakhandi people), Japan and the Toba Batak peoples.
In Bhutan, Japanese pepper proper is known as a thingye and is used in the preparation of soups, gruel and phaag sha paa (slices of pork). In Nepal, timur is used in popular momo, thukpa, chow mein, spicy chicken, and other meat dishes. It is also widely used in homemade pickle recipes.
From Japanese pepper it is possible to obtain an aromatic oil typically used for the famous Chinese recipe of fried noodles, together with brown sugar and rice vinegar. The berry shells are not the only edible portion of the Zanthoxylum plant; in Japan, the leaves are also used, called kinome, especially to enrich recipes of vegetable origin – bamboo shoots, tofu soups, etc. The male flowers, also edible, are marketed in the Japanese territory under the name of hana-sanshō.
Composite spices are also formulated with Japanese pepper; the main ones are: málà and hua jiao yan (Chinese), and Japanese shichimi. A Beijing brewery uses Japanese pepper and honey to flavor a particular beer.
Important are the mixtures of species that are prepared with this plant.
Mala (麻辣 málà, literally numb and spicy) is a mixture of spices typical of Sichuan cuisine made with Japanese pepper and chilli.
Huajiao yan (花 椒盐 huājiāoyán) is a blend of Japanese pepper and grains of salt, roasted and browned in a wok and served as a seasoning for white meats.
Japanese pepper is one of the ingredients in the traditional Japanese seven-spice blend called shichimi togarashi.