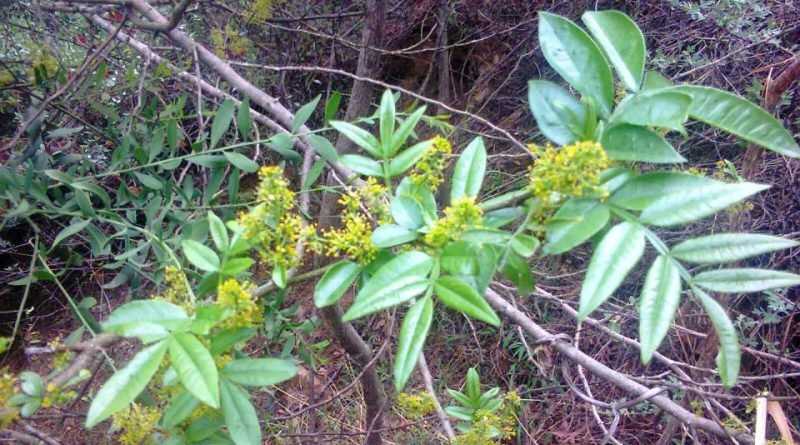 The Winged prickly-ash or rattan pepper (Zanthoxylum armatum DC.) Is a shrub species belonging to the Rutaceae family.

Etymology –
The term Zanthoxylum comes from the Greek ξανθός xanthós yellow and from ξυλον xylon wood: yellow wood, due to the color of the heartwood of the roots of some species of this genus; the name of the genus replaces the original one of Xanthoxylum as an illegitimate result.
The specific epithet armatum means armed, as a weapon, weapons, defenses: as a species with thorns, quills and other defense tools.

Geographic Distribution and Habitat –
Zanthoxylum armatum is a plant native to parts of eastern and south-eastern Asia and the north of the Indian subcontinent and naturalized in different regions; it is also endemic from Pakistan and present from Southeast Asia and present as far as Korea and Japan.
The plant is present, in detail, Japan; Nansei-shoto / Ryukyu Islands; Korea; North-central, south-central and south-eastern China, in particular Anhui, Fujian, South Gansu, Guangdong, Guangxi, Guizhou, South Henan, Hubei, Hunan, Jiangsu, Jiangxi, Shaanxi, Shandong, South Shanxi, Sichuan, Xizang, Yunnan and Zhejiang; Northern Taiwan; Philippines; Vietnam; Laos; Thailand; Burma; Bangladesh; India, including Assam; Bhutan; Nepal; Tibet; the eastern and western Himalayas; Kashmir; and Pakistan, and possibly Indonesia. It also naturalized in northeastern Argentina and the North Caucasus.
The ferrugineum variety is found in north-central, south-central and south-eastern China, particularly in Guangdong, Guangxi, Guizhou, Hunan, Shaanxi, Sichuan and Yunnan.
Its natural habitat is that of areas where it grows below 3100 m. In Nepal’s Salyan district, the shrub grows in the undergrowth of low-altitude Pinus roxburghii forests, along with Aesculus indica and Bassia latifolia, and in higher-altitude oak forests (Quercus incana and Q. lanuginosa), where they are associated with Rhododendron arboreum and Lyonia ovalifolia. Birds love fruits and spread plants widely. 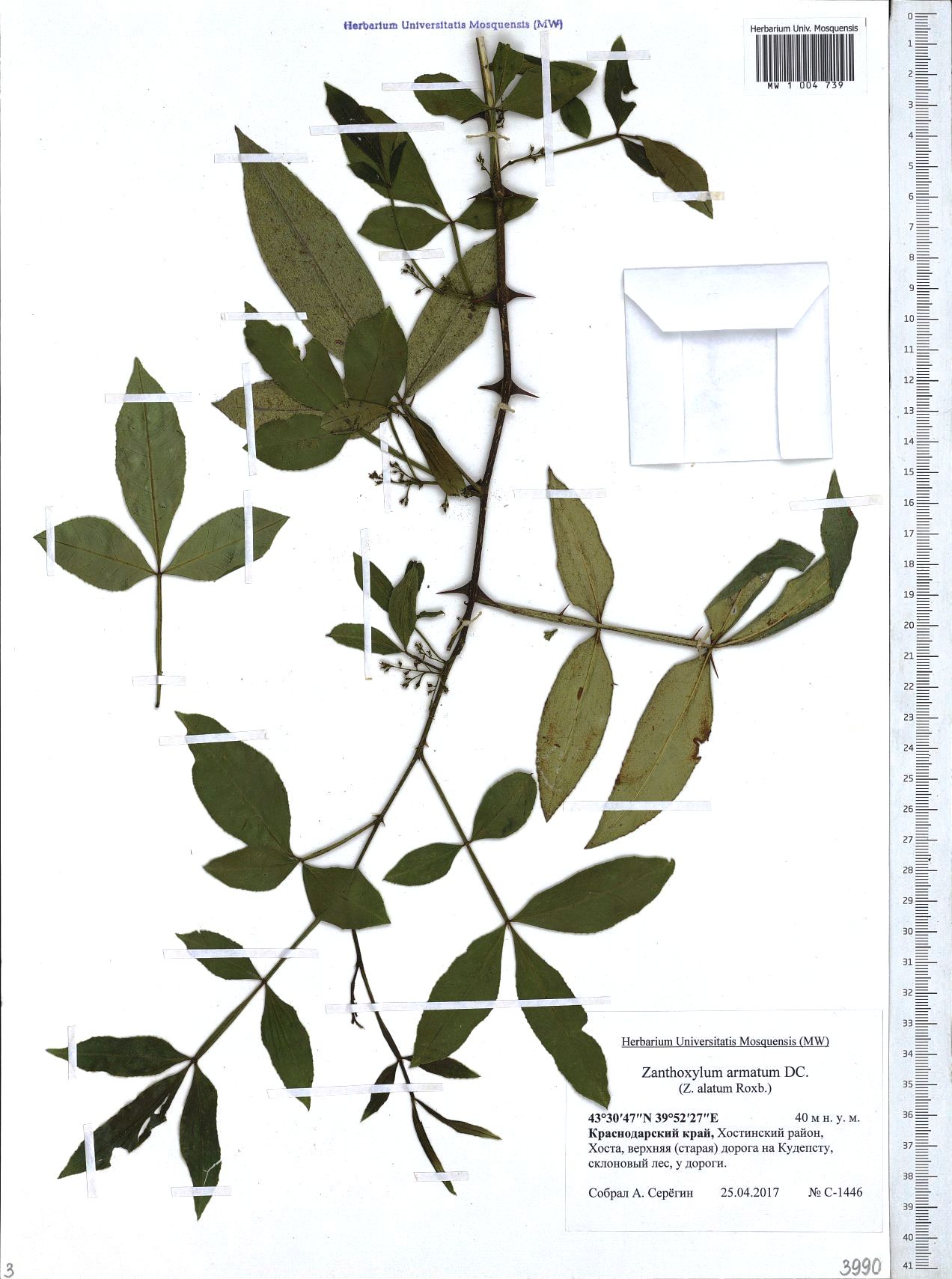 Description –
Zanthoxylum armatum is a deciduous, dioecious plant that grows in shrub and also climbing or tree form, up to 3.5 meters in height.
The leaves are subsessile, opposite, lanceolate, obovate or elliptical in shape.
Both the branches and the leaves have thorns.
The young twigs and the rachis of the inflorescences are hairless or the young branches are scarcely pubescent. The rachis of the leaves is pubescent hairless or russet and has wings up to 6 mm per side; this is one of the anatomical features that distinguish it from other Zanthoxylum species. Other anatomical features of separation are generally weak secondary veins of the flap blades, especially adaxially, with 7-15 on each side of the median vein:
The anthers of the male flowers are yellow before anthesis; and the gynoecium of the female flowers is 1-3 carpellar.
The shrub blooms in China from April to May, and bears fruit from August to October, in Nepal it blooms in the same months, while the fruit is available all year round. In India with flowering from March to April.
The fruit is schizocarpic and is a subspherical coccarium usually purple-red in color with a diameter of 4-5 mm, with protruding sebaceous glands.
The seeds are blackish brown, shiny, with a diameter of 3-4 mm.

Cultivation –
Zanthoxylum armatum is a plant that is widespread in nature and that is mainly harvested for use as a condiment and medicine, as well as for various other products. It is also sometimes grown as a hedge in northern India as well.
The plant usually grows at altitudes of 50 – 1,750 meters in Malaysia and up to 2,400 meters and beyond in continental Asia; it is also a plant with a wide environmental tolerance, which is found from temperate to tropical zones.
For its cultivation it prefers a good moist soil, well drained and deep, in full sun or, at least, in semi-shade.
Propagation occurs by seed. Sowing should be done as soon as the seed matures as stored seeds can take up to 3 months of cold stratification, although scarification can also help.
Germination should take place within 6 months, although it could take another 12 months.
The young seedlings are then placed in single pots, grown for the first year and transplanted in the spring the following year.
It can also be propagated by half-ripe wood cuttings or root cuttings, 3 cm long, planted horizontally in pots; they have a good percentage of engraftment.
Another method of propagation can be that of taking the suckers, removed when the plant is dormant and planted directly in the open field.

Customs and Traditions –
Zanthoxylum armatum was described by the eminent Swiss botanist Augustin Pyramus de Candolle in 1824.
It is a plant that has long been used by local populations. It is one of the sources of the Sichuan pepper spice, and is also used in folk medicine, in the production of essential oils and as an ornamental garden plant.
It is known by numerous vulgar names. In China, the plant and its fresh berries are known as téngjiāo (藤 椒), while the dried seeds are known as qinghuajiao (青 花椒) or majiao (麻 椒). Other names are: Qanadlı zantoksilum (Azerbaijani); Dambara in Pashto, तेजफल tejphal, darmar, tumru, timroo, trimal (Hindi); মুক্থ্ৰূবী mukthrubi (Manipuri); तिमुर timur (Tamil); konda-kasimi (Telugu); ಜಿಮ್ಮೀ jimmi (Kannada); തൂമ്പണലരി (Malayalam); hokum (Adi) ganya (Angami); tumbru, tejbal (other names in India); arhrikreh (Mizo); टिमुर timur (Nepali); หมัก ก้า ก, hui-jiao (Thai); Sẻn gai (Vietnamese);竹叶 花椒, 毛 竹叶 花椒, zhu ye hua jiao (standard Chinese); flügelstachelige Stachelesche (German); Mongmong (Ao Naga) and Winged prickly-ash, rattan pepper in English.
The ferrugineum variety has the name 毛 竹叶 花椒 mao zhu ye hua jiao in Standard Chinese.
The fruit and seeds of the plant are used as a spice, Sichuan pepper while the bark, fruit and seeds are used in indigenous medicines in India, Nepal and Thailand.
The plant is also a source of an essential oil, Wartara oil, and the shrub is also grown as an ornamental garden plant.
In the Silyan district of Nepal, the parts used in medicine are mainly collected for export to India. Plants grow in state, community and private controlled land, resulting in a variety of access regimes, harvest regimes and management practices, leading to the conclusion that the effects of supply and demand on non-wood forest products in general ( NTFP) cannot be generalized, but are specific to each product and place.
Let’s see in detail the food, medicinal or other uses.
The seed is ground into a powder and used as a condiment; it is a substitute for pepper and is widely used in the East; furthermore, a light roasting enhances the flavor more.
The seed is an ingredient in the famous Chinese ‘five spice’ blend. The fruit is quite small but is produced in clusters, which makes harvesting easy and each fruit contains a single seed.
The peel of the fruit acts as a spice.
Young leaves are used as a seasoning.
In the medicinal field, the seeds and the bark are stomachic and vermifuge.
They are used as an aromatic tonic in the treatment of fevers, dyspepsia and cholera.
The powdered seeds are eaten to rid the body of nematodes.
A decoction of 7 – 14 seeds is used in the treatment of abscesses, arthritis, bruises, gastritis, swelling, etc.
A seed paste is held between the teeth for about 10 minutes to relieve toothache.
The fruits, branches and thorns are considered carminative and stomachic and are used as a remedy for toothache.
A paste, obtained from unripe fruit, is taken as a cure for coughs, while a paste, always made from unripe fruit, is applied externally on cuts and wounds.
The resin contained in the bark, and especially in that of the roots, is very stimulating and tonic.
The root is boiled in water for about 20 minutes and the filtered water is drunk as an anthelmintic.
An infusion of the leaves is drunk to relieve stomach pains.
A paste of the leaves is applied externally to treat leucoderma.
Other uses include agroforestry ones.
The plant is occasionally grown as a hedge and is traditionally grown in living enclosures in the northwestern Himalayas, where it helps keep livestock and other animals away and confined, demarcate the boundaries of the land, while providing a range of medicinal and medicinal uses. other type.
In addition, the fruit contains 1.5% essential oil and is used to purify water.
The bark and branches, which are thorny, are used to make toothbrushes and mainly used to relieve the pain of toothache.
Furthermore, the bark and fruits are used as poison for fish while the bark has been used as a repellent for insects.
Finally, the wood is yellow, heavy, hard, fine-grained and is used for walking sticks or as fuel.

Preparation Method –
Zanthoxylum armatum belongs to those plants widely used in their areas of origin, generating an important economy whether for food, medicine or other uses.
The seed, ground into powder and used as a condiment and substitute for pepper and widely used in the East; toasted has a stronger flavor and enters the famous Chinese blend of the ‘five spices’.
The peel of the fruit acts as a spice.
Young leaves are used as a seasoning.
In the medicinal field, the seeds are used as an aromatic tonic in the treatment of fevers, dyspepsia and cholera.
The powdered seeds are eaten to rid the body of nematodes.
Seeded decoctions and pastes are used for various medicinal uses.
The resin contained in the bark is also used in the medicinal field and the root is boiled in water for about 20 minutes, drinking the filtered water.
An infusion of the leaves is also drunk or a paste of these is applied externally to treat leucoderma.
The plant, as mentioned, is then used for many forestry or ecological uses.