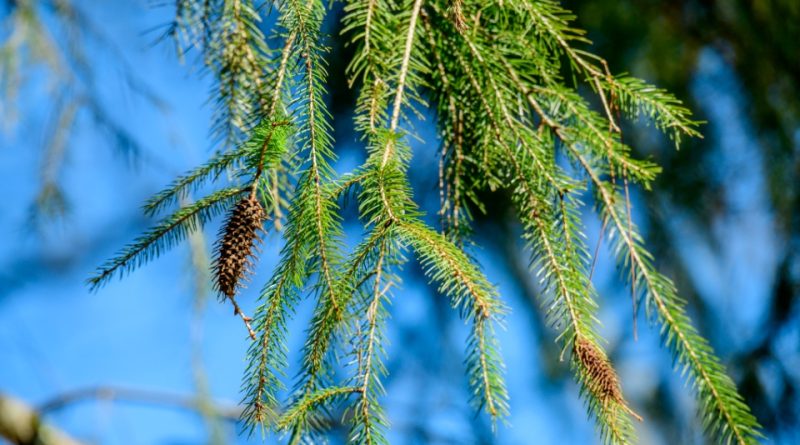 The Chinese fir (Picea asperata Mast., 1906) is an arboreal species belonging to the Pinaceae family.

Etymology –
The term picea is the Latin name of the wild pine in Virgil and Pliny.
The specific epithet asperata comes from áspero, to make rough, rough, unequal, sharpen: probably due to the rough leaves due to the presence of tiny glandular bristles and with probable reference to the sharp tips of the leaves but, unfortunately, Masters (1906) did not give the minimal reference to what he was referring to.

Geographic Distribution and Habitat –
Picea asperata is a conifer native to China where it grows in the east of the Qinghai region, Gansu, Sichuan, Ningxia (Helan Shan) and southwest of Shaanxi. The type variety is found throughout this range, while the var. notabilis and var. ponderosa are confined to western Sichuan; the ponderosa variety, in particular, is known only in the type locality on Balang Shan (巴郎山).
Its habitat is that of mountain areas between 1500 and 3800 m of altitude, typically on podzol soils in a subalpine continental climate with annual rainfall of less than 500 mm. It is found in pure populations, mostly on the northern aspects; sometimes in mixed stands with other species of Picea, Abies chensiensis, A. fargesii and Pinus tabuliformis. In Gansu it grows together with Abies nephrolepis and its most common arboreal associate is Betula albo-sinensis. Near the western limits of its range it overlaps the similar P. crassifolia, while to the east and north-east its ecological analogues are, respectively, P. meyeri and P. koraiensis. 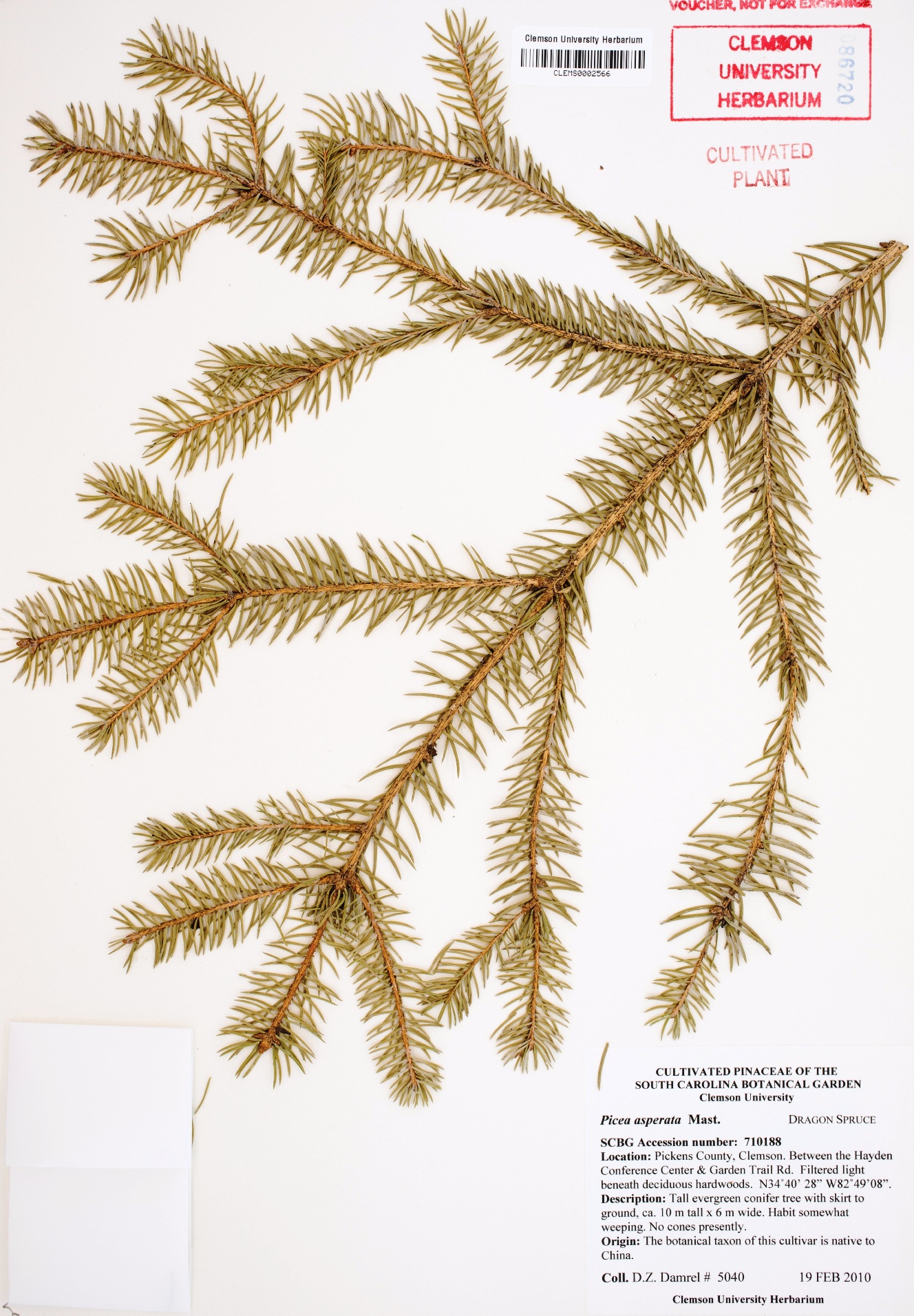 Description –
Picea asperata is a conifer that grows up to about 45 m in height, with a single straight trunk that can reach 1 m in diameter and shoots initially reddish-brown or yellow-brown, then brown or gray-brown in the second or third year ; the pulvini are rigid, with a glaucous structure.
The bark is gray-brown in color, furrowed in rough and irregular plaques.
Its leaves are needle-like, more or less glaucous, 1-2 cm long, linear, slightly curved, quadrangular-rhombic, with acute and slightly pungent tips; they have stomata on both sides, arranged in 4-8 lines. The vegetative buds are conical or ovoid with conical, resinous tips.
Pollination takes place in May-June.
The female cones are cylindrical, 5-16 cm long and 2.5-3.5 cm broad, initially green, then light brown or reddish-brown when ripe. The macrosporophylls are obovate, with an entire or indented margin, 2 cm long. The seeds, oboival, ripen in September-October, and are 4 mm long, with a winged part 11 mm long.

Cultivation –
Picea asperata is a conifer that grows in the high mountains, from 1500 to 3800 m of altitude, preferring podzolic soils; the reference climate is continental, characterized by cold winters and dry summers (annual rainfall of less than 500 mm).
Withstands minimum temperatures between -23.2 ° C and -17.8 ° C.
It grows in mainly pure forests on the northern slopes, or mixed in association with other species of Picea, in southern Gansu also with Abies nephrolepis; among the deciduous trees the association with Betula albo-sinensis is prevalent.
To be cultivated, this plant prefers soils with abundant humidity for the roots; if cultivated in drier areas, the soil must be kept sufficiently moist.
In general, therefore, it thrives well in humid, cold and shallow soils, but is not very resistant to the wind if it is found in shallow soils and tolerates shade poorly.
From a climatic point of view it grows well in the high mountains with a cold and dry climate.
From a pedological point of view, it prefers a pH between 4 and 6.
It is a plant that does not tolerate air pollution.
This species was experimentally planted in Europe as a wood tree.
The growth of young trees is generally very slow due to the damage caused by late spring frosts; however, once trees are taller than 2 meters (which can take 10 years or more), growth increases and can be quite rapid with an average of 30cm per year.
In some mountainous areas, especially on granitic or base-poor soils, growth rate and health have been severely affected by aluminum poisoning induced by “acid rain” pollution.
Propagation occurs by seed and stratification improves germination so it is advisable to sow fresh seeds in autumn in an unheated seedbed. The seeds, in fact, must not be left to dry out and must be kept in a cool place.
It can also be propagated by cuttings obtained from semi-mature terminal shoots, 5 – 8 cm long, in the period of August in a shaded area. These must be protected from frost and form roots in spring.
Another alternative is to prepare cuttings of mature terminal shoots, 5 – 10 cm long, in the period of September / early autumn in an unheated seedbed. These take around 12 months to root well.
The young seedlings should be transplanted when they are quite small, between 30 and 90 cm. Larger trees root and grow with difficulty. The young seedlings must also be transplanted at the beginning of the summer of the following year.

Customs and Traditions –
The Chinese fir is a plant used both for its wood but also for food purposes while there are no known medicinal uses.
Among the food ones, young male cones are used, raw or cooked and used as a condiment.
Young, cooked female cones are also used. The central part, when roasted, is sweet and syrupy.
The inner bark is dried, ground into a powder and then used as a thickener in soups, etc. or added to cereals when making bread.
However, it is usually an emergency food in times of famine.
Raw seeds, even if edible, have no practical use due to their small size.
A refreshing tea rich in vitamin C can be made from the tips of the young shoots.
As for its wood, it is soft but not very strong and is used for construction, airplanes, railway sleepers, furniture and wood fiber.
However, it is also appreciated for its use in the pulp industry to produce paper.
The trunk is used for the production of resin.
The roots, branches and leaves are used to produce aromatic oils.
This conifer has historically been an important wood species within its range, the wood mainly used for pulp and construction.
Unfortunately, also due to its exploitation, its populations have decreased and so forestry has begun to replace natural populations but the plantations are not yet up to the demand.
At present, the species is rated as “vulnerable” on the IUCN Red List, due to the decline of the population status. Although logging has been officially banned in western China’s coniferous forests since 1998, the ban appears not to have been fully effective and the decline continues (2013). The notabilis variety is assessed as endangered, also due to deforestation and the decline of the population status, but in this case it occurs within a much smaller area. The ponderosa variety is rated critically endangered for the same reasons, but in this case within an extremely confined area.

Preparation Method –
Picea asperata is a conifer used mainly for its wood and its exploitation for the paper industry and, to a lesser extent, in construction, it plays an important economic role in China; unfortunately, with the consequent deforestation, the plant has survived only in the less accessible places, and for this reason artificial plants have been necessary, which however are not able to satisfy the market demand.
There are many cultivars, in Europe and America, derived from seeds collected in the early twentieth century by some explorers, marketed as ornamental trees.
Other uses, but minor, are those in food where young male cones are used, raw or cooked and used as a condiment or young female cones, cooked.
The inner bark is dried, ground into a powder and then used as a thickener in soups, etc. or added to cereals when making bread.