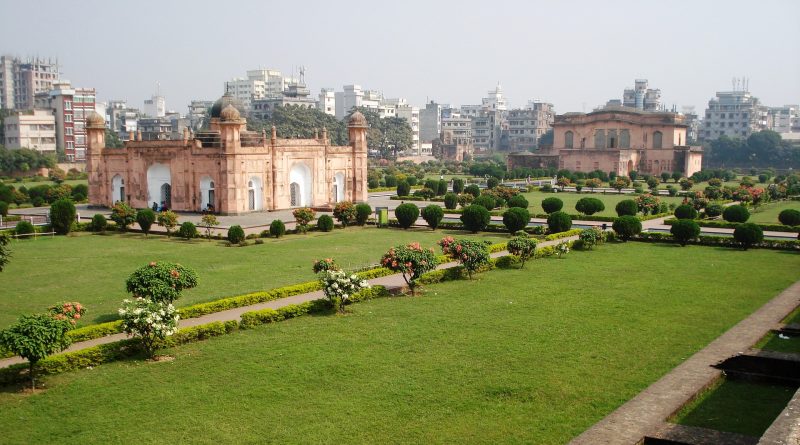 Bangladesh (in Bengali বাংলাদেশ) is a state in Asia that borders on all sides with India with the exception of a small stretch, in the extreme south-east, where it borders with Burma; to the south it is bathed by the Bay of Bengal.
Bangladesh, together with the Indian state of West Bengal, constitutes the ethnic-linguistic region of the Bengalis or Bengal. The name Bangladesh means in Bengali Country of Bengal.
The country covers 147,570 km² (including 10,090 km² of water), and has a population of 165,953,360 inhabitants as of 2021.
The capital of Bangladesh is Dhaka with a population of 13,848,298 as of 2019.

Geography –
Bangladesh is located in the lower terminal area of ​​the Ganges-Brahmaputra river system, and more precisely in the Ganges delta region. This delta is formed by the confluence of the rivers Ganges (local name Padma or Podda), Brahmaputra (Jamuna or Jomuna), and Meghna and their respective tributaries. The Ganges joins the juana (main channel of the Brahmaputra) and later joins the Meghna before flowing into the Bay of Bengal. The alluvial soil deposited by these rivers has created some of the most fertile plains in the world. Bangladesh has 58 transboundary rivers (in most cases with India), making water a politically complicated issue to resolve. Most of Bangladesh’s territory is less than 12 meters above sea level, and it is estimated that about 50% of the land would be flooded if sea level rose by one meter.
Unfortunately, the water and soil are contaminated with arsenic. The main cause is the chemical composition of the minerals that make up the soil, which contaminate groundwater. 90% of drinking and agricultural water is taken from wells, and this causes a great deal of exposure to this toxin. About 77 million inhabitants are exposed to a toxic level of arsenic. According to the World Health Organization, the arsenic-contaminated water crisis in Bangladesh is the largest case of poisoning in the history of a human population.
The highest point in Bangladesh is reached on the Mowdok range at 1 052 meters in the Chittagong Hills in the south-east of the country. An important part of the shoreline includes a swampy jungle, the Sundarbans, the largest mangrove forest in the world and home to several species of plant and animal life, including the Bengal tiger. In 1997, this region was declared at risk.

Climate –
Bangladesh, which is located in the Tropic of Cancer, has a tropical monsoon climate with mild winters from October to March, and a hot and humid season from March to June. The monsoon season lasts from June to October and provides most of the atmospheric rainfall that falls on the country. Natural disasters, such as floods, tropical cyclones, tornadoes, storm surges, occur almost every year, and combine with the damage caused by deforestation, soil degradation and erosion. In this regard, we recall the disaster of November 1970 caused by cyclone Bhola, in which over 300 000 people lost their lives. Other heavy floods shook the country in 1991 and 2007, in both cases with severe human losses, villages destroyed with thousands of homeless people and badly damaged crops.
Temperatures range from an average of 21 ° C during the day in the cold season (reaching around 10 ° C at night) to a maximum of 35–38 ° C during the warm season. 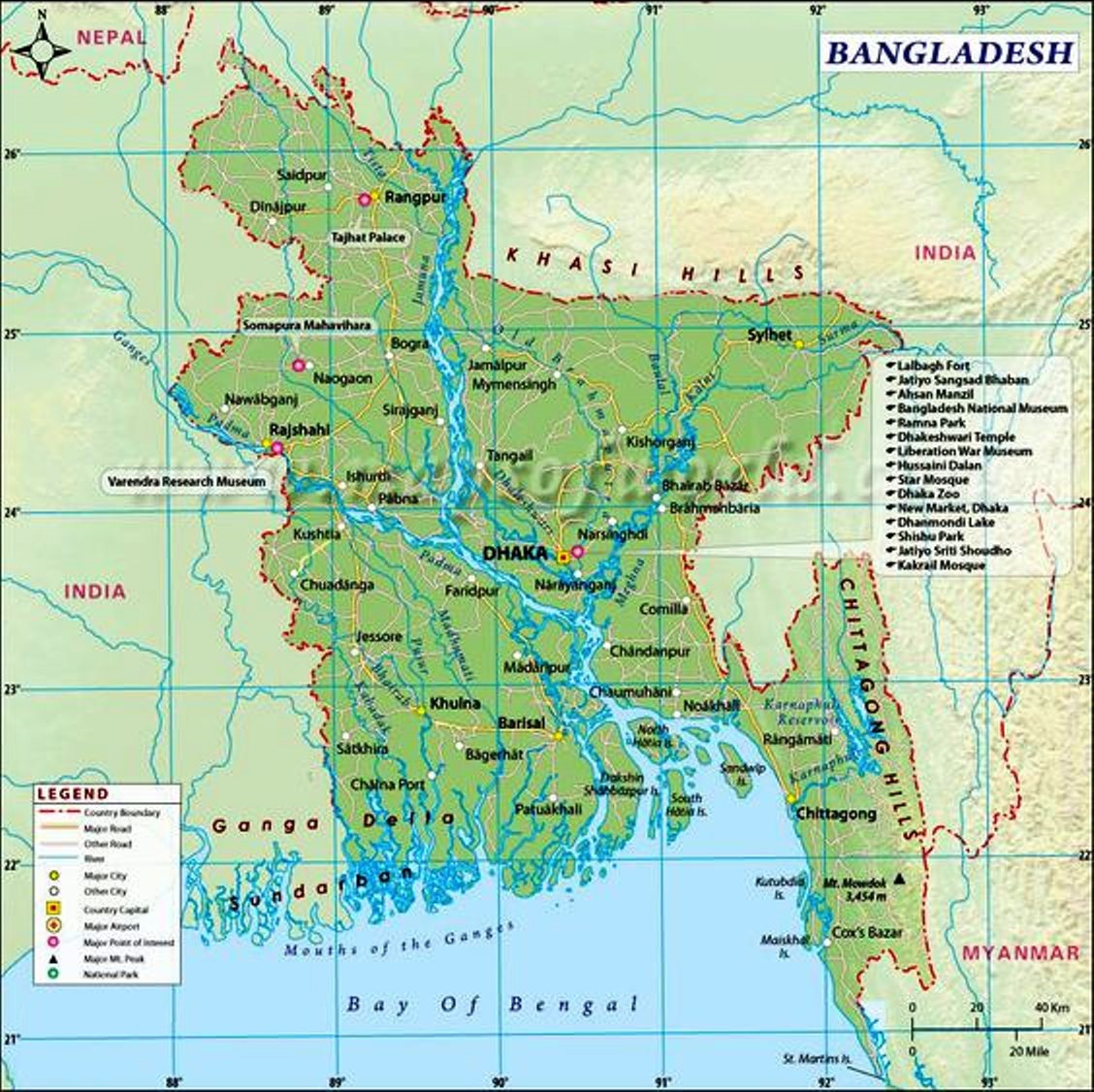 Flora-
Bangladesh is a country that, thanks to its tropical climate, has lush vegetation. Banana trees, coconut palms and other fruit trees grow in the villages. Numerous varieties of flowers with a wide range of scents, sizes and colors are found in abundance throughout the country. Varieties of lotus and water lilies bloom in large numbers in rivers, lakes, ponds and other streams.
In Bangladesh there are more than 6,000 plant species, of which about 300 are exotic and 8 are endemic. Of the total number of plant species 3611 are angiosperms (flowering plants) and 7 are gymnosperms. However, due to the pressure of agriculture and human settlements, ninety-five vascular plants have been classified as threatened, of which 92 are angiosperms and 3 gymnosperms. About 300 species and varieties of algae have been recorded from freshwater habitats alone. There are many more of them in brackish waters and marine habitats. The fungal flora is around 275. There are around 250 species of bryophytes in the country. Of the 250 species of pteridophytes, 230 are ferns.

Fauna –
Wildlife in Bangladesh is large and varied; the country is in fact the permanent residence of about 53 species of amphibians, 19 of marine reptiles, 139 of reptiles, 380 of birds, 116 of mammals and finally 5 species of marine mammals. In addition to the permanently resident birds, there is a further addition of 310 migratory bird species which swell countless skies every year. The country also has the Bengal tiger, Asiatic elephant, Hoolock gibbon, Asiatic black bear, Indian leopard and other flag species.
The vast majority of these creatures currently inhabit an area of ​​land that is approximately 150,000 square kilometers in size; however, this considerable breadth granted does not mean that everything is going well with regard to the preservation of the natural heritage; a large number of animal species have already completely disappeared from the country and another 201 species remain constantly threatened: for example, the dhole, also called “Asian wild dog”, is one of the major endangered species and now completely in danger of extinction from the territory of Bengal; this is due to the progressive loss of its natural habitat and of its main prey, as well as the fault of human persecutory work.
Among the most important animal species that have completely disappeared from Bangladesh are the rhinoceros, the bos gaurus, the banteng, the barasinga or “marsh deer”, the antelope of the nilgau type (“blue antelope”), the Indian wolf, the wild water buffalo, the marsh crocodile and finally also the common peacock.
Among the most representative animals are: the Bengal tiger (in the Sundarbans forest), elephants (in the eastern hills of Chittagong), leopards, monkeys, dappled deer, macaques, foxes and jackals. Among the reptiles, there are turtles, pythons, crocodiles and several poisonous snake breeds including the famous cobra. There are a lot of bird species.
However, as the majority of the human population lives in or around very large urban conglomerates, this has helped to limit deforestation to some extent. However, the rate of human growth continues to increase and this has led to great demands in terms of the biophysical environment, but has also led to a subsequent compensation of the numerous natural habitats. Although several areas are officially protected by law, a large part of Bangladesh’s wildlife is threatened by this growth.