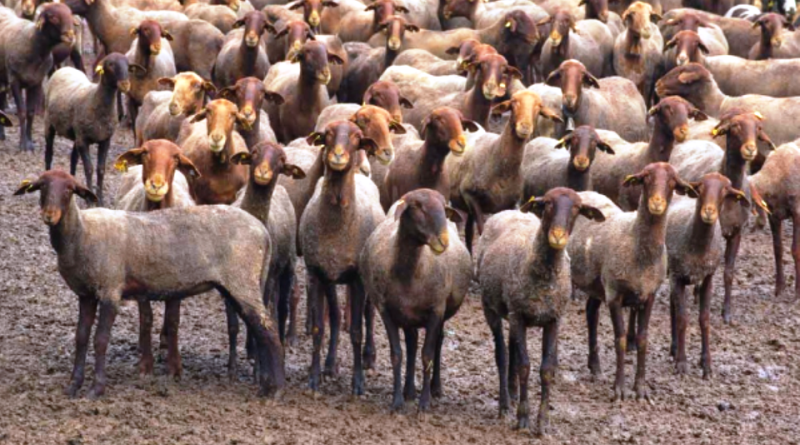 The Guirra sheep breed is a sheep (Ovis aries Linnaeus, 1758) originally from Spain, with a main aptitude for meat production.

Geographic and Area Distribution –
The Guirra is a Spanish sheep breed, widespread mainly in the Spanish provinces along the Mediterranean coast (Alicante, Valencia, Castellón de la Plana); however, with the exception of some herds in the mountainous areas, it is present almost exclusively in the agricultural region of the Valencian Community.

Origins and History –
The Guirra sheep is a Spanish breed (also called Levantina or “sudat”) whose exact origins are not yet known, although it seems that the breed was developed by crossing another local Spanish breed, the Manchega, with North African breeds. thin tail. Ancestors of this breed, coming from Africa, are said to be the Bení Ahsen sheep, a breed from the Atlantic coast of Morocco. Their arrival in Spain would have been favored by the good commercial relations existing between the Spanish Levant and the aforementioned African area.
The Guirra breed is now officially protected in Spain and is bred not only for the production of meat and milk, but also for its wool.
It is a native breed in danger of extinction and owes its name to the red color of the skin and coat.
It is believed that there are only 5,000 animals scattered throughout the Comunidad Valenciana and, to a lesser extent, in Tarragona. Today only three herds are still used for milking, in all about 500 animals; the others are intended only for the production of meat.

Morphology –
The Guirra sheep breed is a sheep characterized by a reddish-brown color of the fleece.
The fleece covers the neck, torso and parts of the legs of the Guirra breed. Their fleece never gets dense and is known to be quite greasy to the touch; furthermore these sheep have a dark red pigmentation on the skin.
Their wool lightens as they grow into a mixed red and cream colored fleece. Guirra does not produce dense wool and is considered quite greasy.
The ears are medium in size and protrude horizontally from the top of the head. The fleece covers the trunk, neck and part of the legs.
It is a small to medium sized breed, with a convex nose and forehead profile and an average weight of 80 kg for males and 55 kg for females.
It is a breed with an average lifespan of 10-13 years.

Productive attitude –
The Guirra sheep breed has historically been bred for the production of meat, wool and milk; today it is mainly raised for their meat.
It is a very resistant and strong and adaptable breed; they can cope with most climates also characterized by high temperatures and low rainfall, which make the vegetation poor, highly seasonal and based on plants with low digestibility and low nutritional value.
Its characteristic is that, in the same way as goats, they can reach food at the top, using two legs to balance themselves.
It was once widely used for milk production. This is due to the high quality of the milk, excellent for the production of high quality artisan cheeses.
From the milk of the Guirra sheep a raw milk cheese with lactic coagulation is obtained, matured for three months, cylindrical in shape and weighing about 2 kg per wheel. The rind of this cheese has a yellowish color, with ocher red hues, due to the action of molds that act in the aging process. The paste has a semi-hard consistency, ivory white, with very small eyes, especially in summer. Depending on the duration of the seasoning, it may have a small darker circle around the rind. The grain is fragile, but creamy; the graininess is of the type of fine flour. The scent is quite intense, and emphasizes animal notes with references to wild mushrooms and forest humus. The taste is very particular and persistent, the acidity, the taste of mushrooms, animals (wool, leather) and dried fruit are distinguished. An intense and powerful bouquet, which ends with a spiciness that grows progressively, but without becoming aggressive. This cheese is processed, during the production season, as mentioned, with the raw milk of this breed.
The Guirra wool, on the other hand, already considered of little value due to its red color, is not considered a source of income, but rather an expense for shearing and harvesting operations.