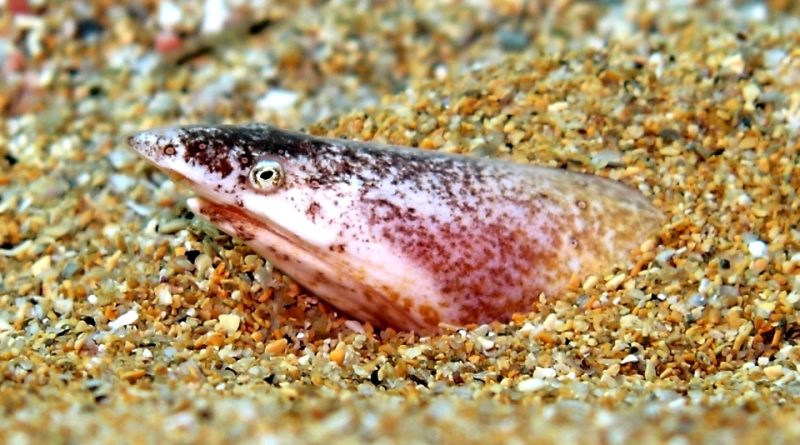 Geographic Distribution and Habitat –
Apterichtus caecus is a species native to the eastern Atlantic Ocean, present between the Bay of Biscay and the coasts of tropical Africa and in the western Mediterranean including the Balearic Islands.
It is present in all Italian seas, reported in the Ligurian Gulf and in Naples, more frequent in Taranto and in Sicily. It is very rare, however, in the Adriatic.
Its marine habitat is near the coast, even at 2 m and more rarely at 1 m depth, buried in mud or fine-grained sand but also lives at depths between 10 and 40 meters. 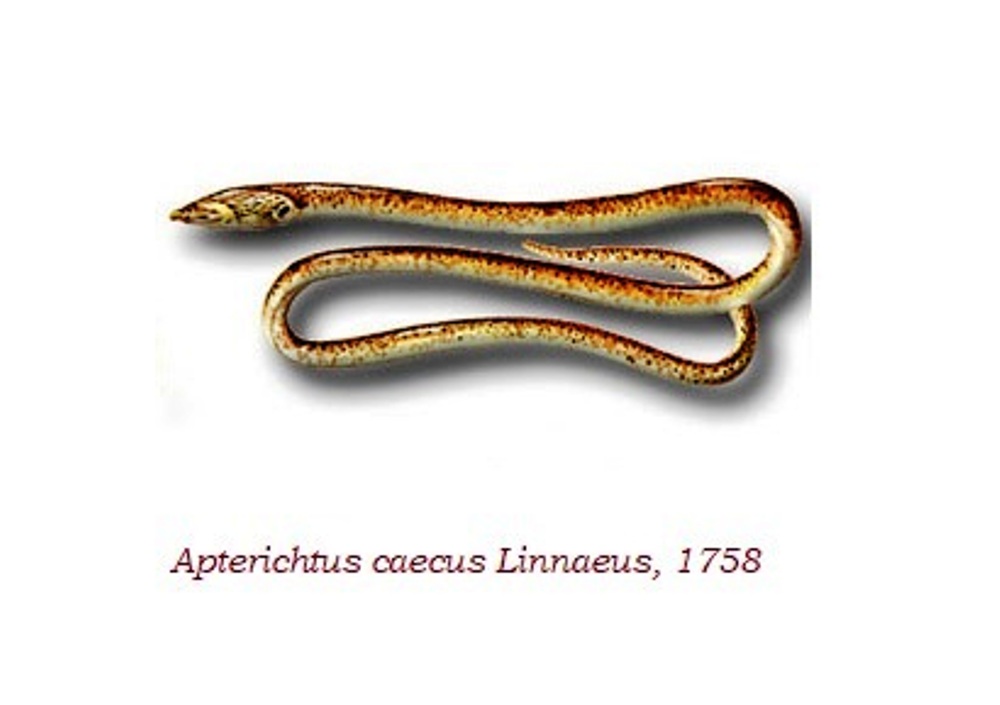 Description –
The Apterichtus caecus is recognized for having a cylindrical and very elongated body, with a conical tail end. The color of live fish is not well known, however it is believed to be reddish brown with dark spots. It measures up to 60cm but usually much less.
On the skin, devoid of scales and covered with mucus, the lateral line is visible only in the front of the body.
It has small, oval and close gill openings.
The head has a prominent conical muzzle and the anterior nostrils are tubular, opening immediately below the muzzle. The posterior ones are placed on the edge of the lip. The eyes are very small.
The mouth is tight. The mandible is short and in both jaws there is a single row of teeth, small and curved back. Numerous mucous pores around the mouth and on the head.
The dorsal and anal fins are rudimentary, while the caudal and pectoral fins are absent.

Biology –
The Apterichtus caecus lives quite close to the coasts, normally between 10 and 40 meters deep but which can reach up to one meter in some cases, buried in mud or fine-grained sand.
Little is known about the biology of this fish, especially for its habitual habitat; however the spawning of this species in the Mediterranean was recorded in the first summer months of May and June; eggs and larvae are pelagic but are found on the surface in spring. The larva is a leptocephalus.

Ecological Role –
The Apterichtus caecus, as mentioned, lives near the coast sunken in mud or fine-grained sand. When it moves, it leaves a very sinuous and regular trace and, often, at the end of this trace you can see the garment coming out of the sand. If he feels threatened, he quickly returns to sink by reversing.
This fish is very similar to Dalophis imberbis and has an even more vermiform appearance being completely devoid of fins and having a very thin body with a round section. Another related species is Apterichtus anguiformis long confused with A. caecus.
As for its diet, it is a carnivorous fish that preys on other fish and benthic invertebrates.
It is occasionally caught with trawls or fishing lines and the meat is edible but rich in bones, so it has no value on the markets.