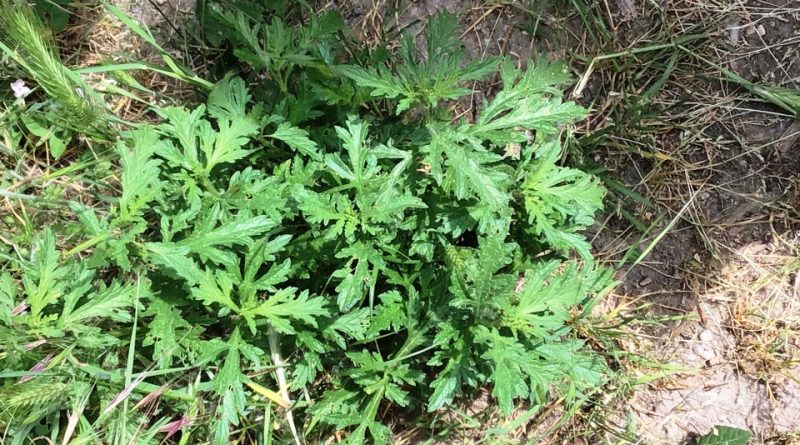 The common vervain or common verbena (Verbena officinalis L.) is a herbaceous species belonging to the Verbenaceae family.

Geographic Distribution and Habitat –
Verbena officinalis is a Eurasian plant that has now become sub cosmopolitan; grows in Europe, Asia, Africa and America.
In Italy it is widespread in all regions.
Its habitat is that of patchy ruderal vegetation, in landfills, along road margins, on walls, paving stones, flower beds, gardens, on loamy-clayey soils that are quite fresh and rich in nitrogen compounds, from sea level to the lower mountain belt. 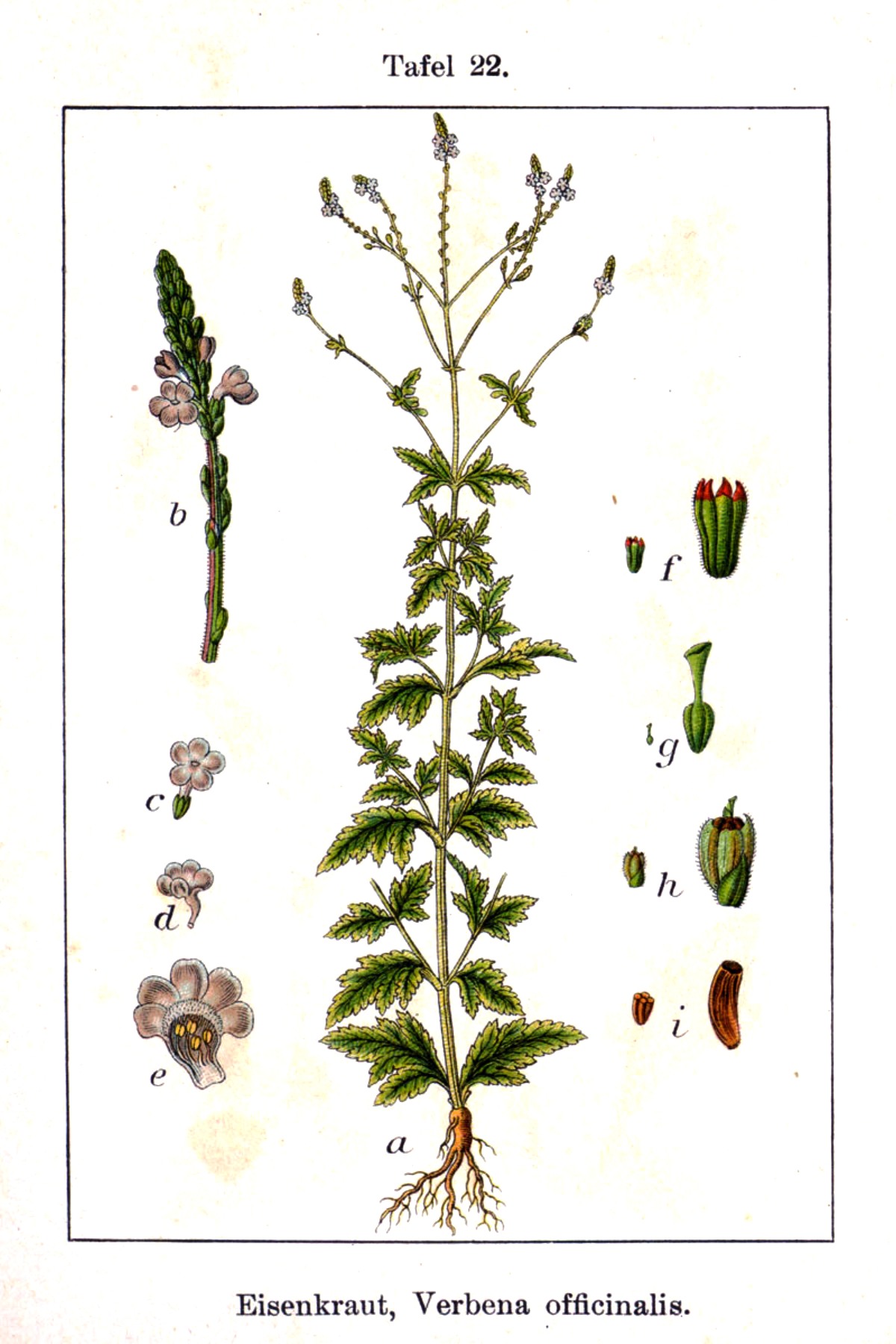 Description –
Common Verbena is a perennial herb that grows to 100cm or more in height.
It has a straight, rough, pubescent stem on the edges, quadrangular, woody at the base and branched at the top and is marked by two longitudinal grooves.
The leaves are opposite, petiolate, rough, pinnate, lanceolate and with deep lobes.
The flowers are sessile of a violet-blue or light lilac color and are grouped in axillary and terminal paniculate spikes. The corolla is funnel-shaped.
The flowering period is: May-August.
The fruit is a microbasarium with a thin, ovoid-oblong exocarp, formed by 4 monospermic mericarps, 1.4-2.1 mm, oblong-cylindrical, trine, with 4-5 longitudinal ribs on the back and with rough-papillose trichomes, whitish on the commissural surface, glabrous, brown in color.

Cultivation –
Verbena officinalis, being a rustic plant, develops well both in sunny and semi-shady places. In partial shade, the plant struggles to bloom. It fears heavy rains; withstands the arid heat, even at low temperatures, but fears frost.
From a pedological point of view it grows well in calcareous soils, rich in organic matter and well drained.
It should be watered regularly throughout the vegetative cycle, especially during the flowering period.
It is a nitrophilic plant that takes advantage of nitrogen fertilization or growing in organic soils.
This species is a plant suitable for growing in pots on sunny balconies for many hours of the day. The specific soil for pot plants kept moist but never soaked with water, especially during the flowering period. It should be fertilized every 15 days during flowering. In winter, Verbena officinalis should be protected from frost, in a very bright place. It fears heavy rain and frost.
Multiplication occurs in nature by self-seeding; for spring sowing; by cutting in summer and by division of the tufts.
Sowing takes place between February and March by spreading the verbena seeds in the moist soil of the seedbed and then covered with fine sand. The seedbed should be placed in a place protected from light and with a constant temperature of about 20 ° C. Once germination has taken place, the seedbed is moved to the light to allow the seedling to grow.
The multiplication by division of the tufts should be practiced instead in spring or autumn on vigorous and healthy plants.
Multiplication by cuttings must be done at the end of summer, more precisely in August or early September. 8-10 cm long apical cuttings are taken from the branches; they are treated with a rooting hormone and then buried in a mixture of sand and peat in equal parts, always kept humid until the appearance of new leaves. The container should be placed in a place with a constant temperature around 18-20 ° C. The cuttings that have rooted must be made to strengthen and then transferred to the final residence with great delicacy and with all the earthen bread.

Customs and Traditions –
Verbena officinalis, already in ancient times, was considered a prized plant for its medicinal properties.
It is still a widely used plant in herbal medicine as it has multiple medicinal properties: it is used to treat stones, it is spasmolytic, draining, anti-inflammatory, analgesic, diuretic, pain reliever, tonic, vermifuge, febrifuge, tranquilizer, etc. but it should not be used during pregnancy.
Its use is through infusions, decoctions, compresses. External use is recommended, at least as infusions and decoctions. Traditional use has been recommended for centuries as a bitter tonic plant, digestive stomachic, splenic-biliary obstructive plant. The traditionally recommended dose is one cup of herbal tea with a tablespoon of herb 2-3 times a day. This plant has been used in herbal medicine to treat nerve problems and insomnia.
It has also been considered an inspirational herb, so it has long been believed to be a powerful ally of poets and writers. More recently, the Pawnee Indians have used it to enhance their dreams.
In northeastern Europe it was known as a sacred herb, used in rituals to purify and defend against demonic diseases. or even to defend against vampires
According to William Faulkner in his short story “An Odor of Verbena”, verbena is the only fragrance that can be smelled by horses without leaving a trace.
This plant contains mucilage, glycosides, essential oil (citral, terpenes, terpene alcohols and geraniol), saponin, silicic acid, caffeic acid, tannins and bitter principles.
The active ingredient of verbena is a heteroside called verbenalóside which stimulates the parasympathetic nervous system and by hydrolysis produces verbenalol, verbenaline, verbenanin and hastatoside.
In detail, Verbena officinalis is a plant that stimulates the parasympathomimetic system thanks to the irioid heteroside, verbenalol, reducing the strength and frequency of the heartbeat and stimulating intestinal peristalsis. Due to its sedative activity, it is used to combat insomnia caused by states of nervousness that do not allow you to fall asleep. Useful against migraines for its antineuralgic and sedative activity. Let’s see some applications:
– Neuroprotective: the aqueous extract of Verbena officinalis has shown neuroprotective effects against Alzheimer’s disease;
– Astringent: tannins slow down diarrhea and are local hemostatic agents, favoring wound coagulation,
– Anti-inflammatory: mucilages reduce inflammation as well as having an emollient capacity that relaxes, softens and protects the skin and mucous membranes;
– Antispasmodic: verbenalol is a glycoside with parasympathomimetic, antithermal, uterotonic and renal vasodilator effects,
– Infectious diseases: verbena has been recommended for convalescence from acute diseases;
– Gynecology: verbena infusions are recommended to increase the volume of milk. To avoid painful menstruation and rheumatism;
– Digestive system: in large quantities it can cause vomiting;
– Hypnotic: verbena produces a slight depression of the central nervous system;
– Against cough: iridoids have a calming effect on the respiratory mucosa by inhibiting the cough reflex;
– Digestive: Verbena has been shown to increase the production of gastric juices in animals.
Verbena officinalis has been used to treat nervousness, insomnia, anxiety, physical exhaustion, mental exhaustion, unproductive cough, asthma, bronchitis, cold, dyspepsia, biliary dyskinesia, oliguria, urinary retention, edema, arthritis, astralgia, gout. It has also been used locally for the treatment of stomatitis, laryngitis, dermatitis, itching, burns.
As far as pharmacological actions are concerned, it has galactogogic properties which have been attributed to aucubin. Verbena fruit extracts have been used to treat dysmenorrhea and stimulate lactation. Verbena has weak parasympathetic properties, causing a slight uterine contraction. Verbenaline has been reported to have a stimulating activity of the uterus. Sympathetic activity has been described: low-dose verbenaline acts as an agonist on sympathetic nerve endings, while high doses cause antagonism. A weak laxative action of iridoid glycosides has been described in mice.
It has also been shown that iridoid heterosides (especially verbenalol) produce an anti-inflammatory, local analgesic and slightly parasympathomimetic effect, with sedative, spasmolytic action, stimulating intestinal peristalsis and diuresis, reducing the frequency and intensity of the heartbeat. . Due to the presence of tannins it has a certain astringent action. The mucilages give it an emollient and anti-inflammatory activity.
Regarding its toxicity, remember that verbena extracts can have a certain hypothyroid action (decrease in thyroid activity) therefore they can block the action of some hormones. Its use in pregnant women is prohibited because verbenalóside (irioid heteroside that hydrolyzes into verbenalol) can cause a uterotonic effect and hinder the characteristic contractions of childbirth.
High doses of verbenaline cause paralysis of the central nervous system, causing stupor and convulsions.
Verbena, which has tonic and restorative properties, is sometimes used as a home herbal remedy.
Some notable results have been achieved using this plant in the treatment of some cancers, but more research is needed before any definitive claims can be made.
The plant is used in Bach flower remedies – the key words for prescribing it are “strain”, “stress”, “tension” and “excess of enthusiasm”.

Preparation Method –
Verbena officinalis is harvested at the beginning of flowering in summer and dried for later use.
In detail, the collection of flowers and leaves (fresh or dried) is practiced from spring to autumn even if according to ancient popular beliefs it is preferable to do it on June 24, St. John’s day or Night of the Witches, to fully benefit from its properties. medical – therapy.
The flowering tops collected at the beginning of flowering, preferably from July to August, gathered in bunches, hang to dry in the shade in an airy place; they are kept in paper or canvas bags.
The whole dried plant is used as a medicinal herb, especially the flower and, to a lesser extent, the root.
The leaves and flowering stems are analgesic, antibacterial, anticoagulant, antispasmodic, astringent, purifying, diaphoretic, slightly diuretic, emmenagogues, galactagogues, stimulants, tonics and vulneraries.
The root is astringent, it is used in the treatment of dysentery.