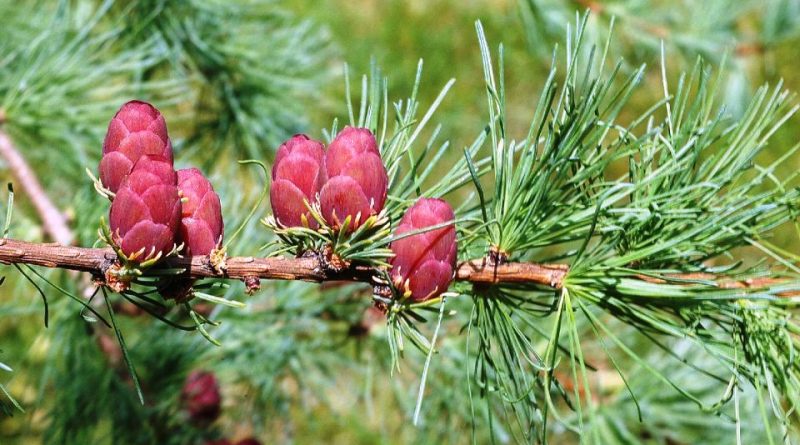 Etymology –
The term Larix comes from the Latin name of the larch, assonant with the Greek term λᾶρός láros pleasant, referring to the aroma
The specific laricina epithet has the same origin as the Latin etymology of larix.

Geographic Distribution and Habitat –
Larix laricina is a conifer native to Canada, present in a territory ranging from the eastern Yukon and Inuvik, north-western territories from east to Newfoundland, and also to the south in the upper northeastern United States from Minnesota to Cranesville Swamp, western Virginia; there is also an isolated population in central Alaska, separated from the populations of the eastern Yukon by a space of about 700 kilometers; this population is treated as a distinct variety: Larix laricina var. alaskensis by some botanists, although others argue that there are no grounds for treating it as a separate variety.
As for its habitat, this larch forms vast pure populations in the boreal region of Canada and in northern Minnesota. In the rest of its populations in the United States and in the maritime provinces, it is found locally in both pure and mixed populations.
The main associated with this plant is usually the Picea mariana in mixed populations in all sites. The other associated species are: Abies balsamea, Picea glauca and Populus tremuloides in the boreal region. In the best organic soil sites in the northern forest region, the most commonly associated species are Thuja occidentalis, Fraxinus nigra, and Acer rubrum.
Other commonly associated species are Ulmus americana, Populus balsamifera, Pinus banksiana, Betula papyrifera, Betula papyrifera var. kenaica and Betula alleghaniensis.
The undergrowth of Larix laricina, which casts a discreet shade, is quite dense. This conifer is associated with: Betula glandulosa and Betula pumila, willows (Salix spp.), Alnus rugosa and Cornus stolonifera. Among the low shrubs we find Ledum groenlandicum, Andromeda glaucophylla, Chamaedaphne calyculata and Vaccinium oxycoccos. The herbaceous cover is instead composed of sedges (Carex spp.), Eriophorum spp., Maianthemum trifolium, Potentilla palustris, Caltha palustris and Menyanthes trifoliata. The ground cover is usually composed of sphagnum moss (Sphagnum spp.) And other mosses. 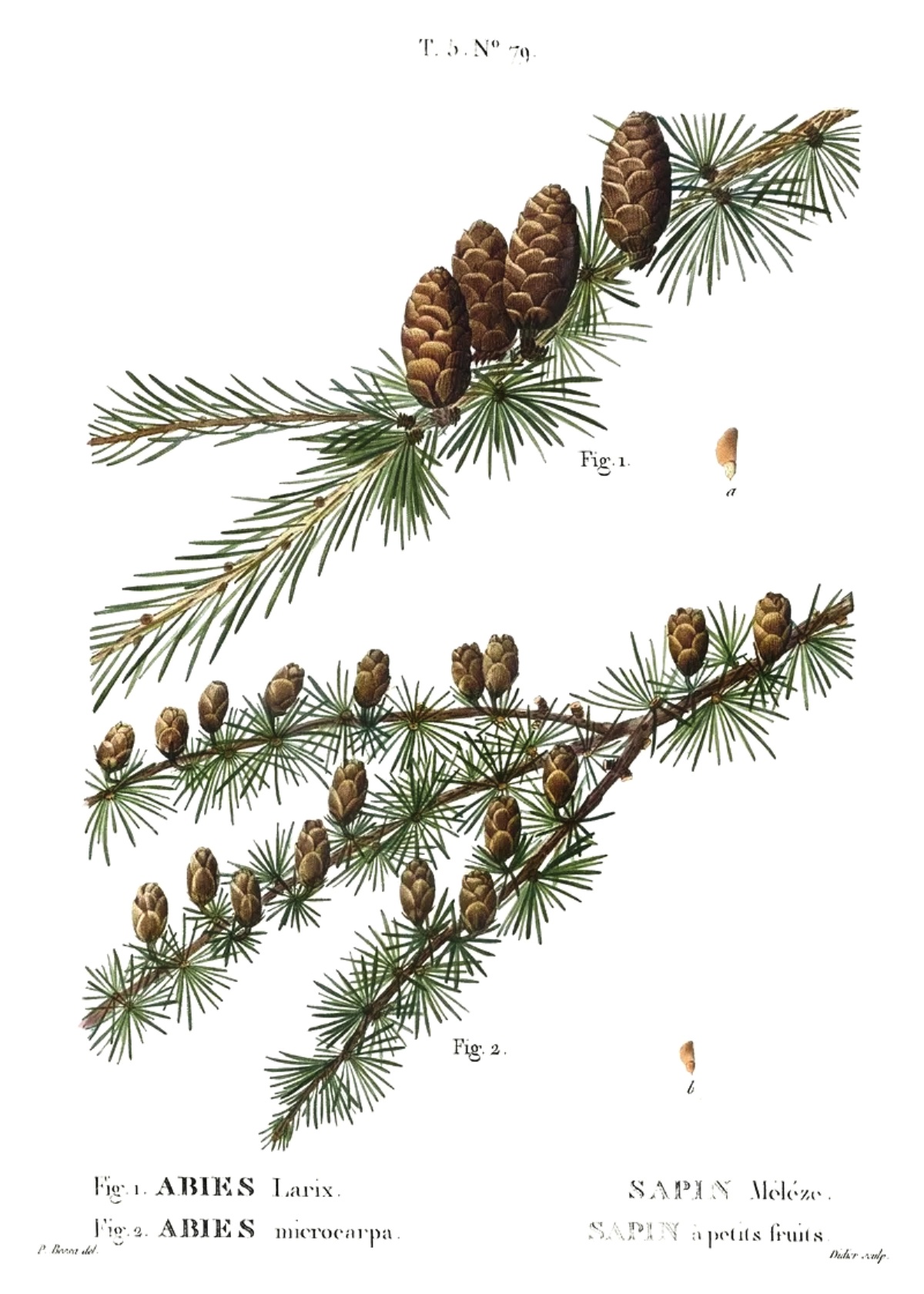 Description –
Larix laricina is a small and medium-sized conifer of the northern hemisphere and a deciduous tree that reaches 10-20 m in height and with a trunk up to 60 cm in diameter.
The bark is pink in color, but under the flaking bark it can appear reddish. The leaves are needle-like, 2–3 cm short, blue-green in color, turning to bright yellow before they fall in autumn, leaving pale pinkish-brown shoots uncovered until next spring. The needles are produced spirally on long shoots and in dense clusters on long woody spur shoots.
The cones are the smallest of any larch, only 1–2.3 cm long, with 12-25 seed flakes; they are bright red, turn brown and open to release seeds when ripe, 4 to 6 months after pollination.

Cultivation –
Larix laricina is a conifer that commonly grows in swamps and other lowland areas.
It is a very cold tolerant plant, able to survive temperatures down to at least -65 ° C and commonly found at the edge of the Arctic wood on the edge of the tundra. The trees in these severe climatic conditions are smaller than those further south, often only 5m high. They can tolerate many types of soil but grow most commonly in swamps, peatlands, moist organic soils such as sphagnum, peat and woody peat. They are also found on mineral soils ranging from heavy clay to coarse sand; therefore the texture does not appear to be limiting. Although this conifer can grow well on limestone soils, it is not abundant in the limestone areas of eastern Ontario.
It is also a conifer with little tolerance to shade which requires the use of balanced management. Some adaptation of the clean cut or cut of the tree from seed is generally considered the best silvicultural system because the seeds of this plant apparently germinate best outdoors and the seedlings require practically full light to survive and grow well.
Although it can tolerate some shade during the first few years, it must become dominant to survive.
Larix laricina is also cultivated as an ornamental tree in the gardens of cold regions; in addition, several commercially available dwarf cultivars have been created and it is commonly used for bonsai.
Propagation occurs by seed.
This larch must also be protected from winds for better growth of young seedlings.
Finally, remember that it is a plant that can be subject to some phytophagous insects that must be carefully monitored.

Customs and Traditions –
Larix laricina is a plant that was used by the aboriginal peoples of the north-western regions of Canada who used the inner bark as a poultice to treat cuts, infected wounds, frostbite, boils and hemorrhoids. The outer bark and roots are also said to have been used with another plant as a treatment for arthritis, colds, and general aches and pains.
This plant has a wood that is hard and durable, but also flexible in thin strips, and was used by the Algonquian people to make snowshoes and other products where sturdiness was required. Natural hooks located in stumps and roots are also preferred for making knees in wooden boats. Currently, wood is mainly used for pulp, but also for poles, raw lumber and firewood; it is not a major commercial timber species. Wood is also used to make the platforms in the stables.
The poles, made from its wood, also for naturalistic engineering support and before 1917 in Alberta by surveyors because at that time the highly rot-resistant wood was readily available in the bush and was light to transport. Furthermore, their resistance to rot was also the reason why they were often used in early water distribution systems.
Ecologically it is a very useful plant for wildlife that uses the tree for food and nesting. Porcupines eat the inner bark, snowshoe hares feed on seedlings of this conifer, and red squirrels eat the seeds. some birds frequent this larch during the summer.
Some phytophagous insects and mites feed on parts of Larix laricina causing, in some cases, serious injuries and damage. These include: Choristoneura fumiferana, Zeiraphera improbana, Oligonychus ununguis, Argyresthia laricella and Dendroctonus simplex.
Finally, some fungi develop on this plant, some of which can cause serious repercussions also from an economic point of view; among them the mushroom Lachnellula willkommii. It is a relatively new pathogen in Canada, first registered in 1980 and originating in Europe. The fungus causes the formation of large cankers and a disease known as larch cancer which is particularly harmful to Larix laricina by killing both young and mature trees.
Aside from that, the only common foliage diseases are some rust which, however, these rust causes minor problems.

Preparation Method –
Larix laricina is a conifer that has been used since ancient times both as a forest species, for its timber, and as a plant used in the folk medicine of the aboriginal peoples of the north-western regions of Canada who used the inner bark as a poultice for various treatments.
On the other hand, no particular food uses are known.