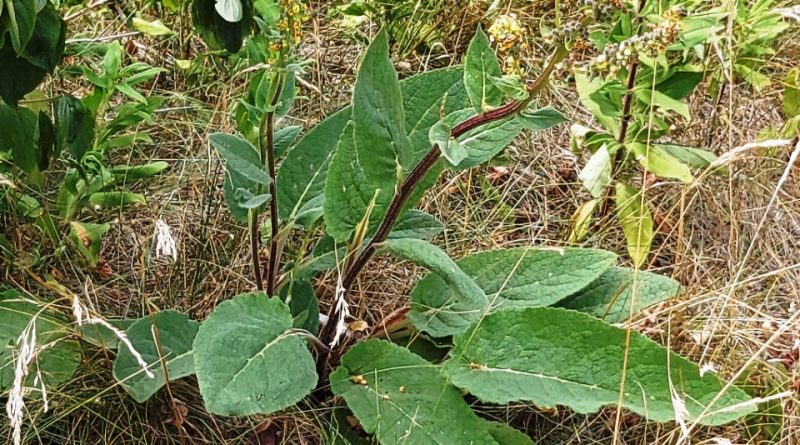 The Black mullein or dark mullein (Verbascum nigrum L.) is a herbaceous species belonging to the Scrophulariaceae family.

Etymology –
The term Verbascum comes from verbascum, a plant cited by Pliny who approaches it to Gr. phlomis and enumerates three species, variously identified (Verbascum album, perhaps Verbascum thapsus; Verbascum nigrum or foemina, perhaps Verbascum nigrum; Verbascum silvestre, perhaps Phlomis fruticosa or Verbascum blattaria). It is a much discussed etymology: it has been linked to beard, for hairy leaves, verber rod, virile member verpa, verbum word, magic formula; none of these explanations are satisfactory. The majority of authors, on the basis of the suffix -asco, think of a Ligurian loan, therefore of a pre-Indo-European origin; Wiczak instead approaches it to the name of the mullein in various Iranian languages ​​of Pamir žirmesk, yermesk, ramesk, which he traces back to an ancient Iranian * gari-masca-, equivalent to the ancient Latin * ver-mascum, with the passage to verbascum due of the connection by popular etymology to verbum. While the second part remains unexplained, the first part should be linked to the proto-Indo-European gwrHi- / gwerHi- mountain.
The specific epithet nigrum comes from black niger: due to the presence of blackish organs.

Geographic Distribution and Habitat –
The black mullein is a plant widespread in the temperate and temperate-cold zones of Europe, with an area ranging from Spain to Ukraine.
In Italy it is present in all regions except in the Marche, Puglia, Sicily and perhaps Lazio.
Its habitat is that of ruderal areas, sometimes in rather disturbed clearings and pastures, on clayey soils rich in carbonates and nitrogen compounds, from neutral to subacid, with optimum in the lower mountainous belt, up to about 1600 meters above sea level. 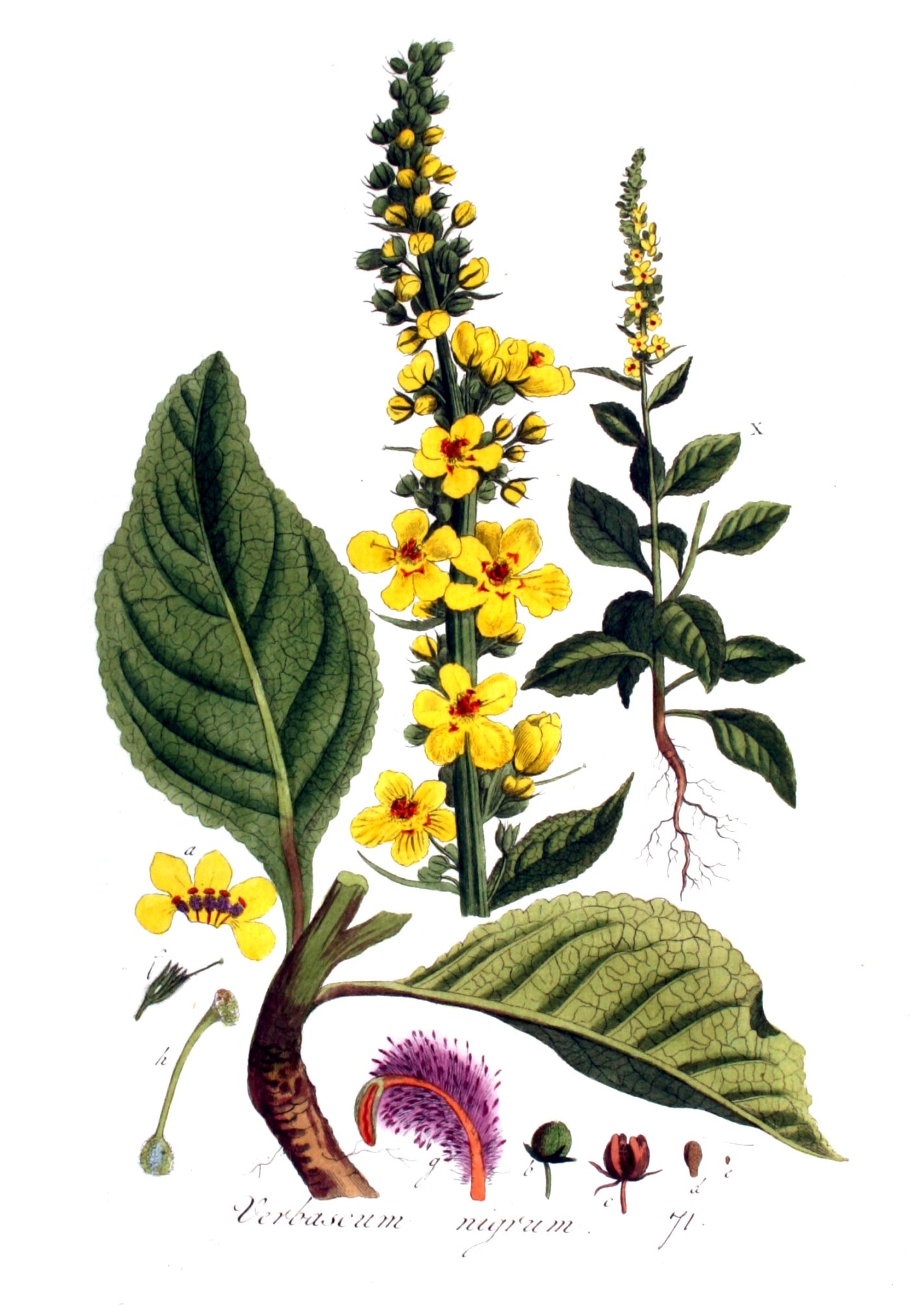 Description –
Verbascum nigrum is a biennial herbaceous plant whose stem is hairless and rather angular in the upper part, while it is felted in the lower part, and the plant can reach from 50 to 100 cm in height.
The leaves are large, petiolate, toothed, dark green on the upper side, gray and tomentose on the underside.
The bright yellow flowers with blood-red speckled petals are grouped in a terminal raceme that often bears lateral ramifications.
The flowering period is from June to September.
The fruit is a sepicidal capsule, bivalve of 4.3-5 x 3-3.5 mm, slightly longer than the calyx, from ovoid to ellipsoid, rounded at the apex, pubescent. Seeds of 1 x 0.5 mm, obconic-prismatic, with various rows of alveoli, brownish.

Cultivation –
Verbascum nigrum is a biennial-perennial plant that is also harvested in nature for local use as a medicine.
It usually grows spontaneously on dry calcareous soils and can be cultivated in most types of soil, preferring chalky ones, provided they are well drained, possibly loose and even dry, preferring a sunny position; on the other hand, it does not like shady areas and humid soils.
The plant hybridizes with other plants of the same genus, although the progeny is generally sterile.
Propagation occurs by seed. Sowing should be done in spring or early summer in an unheated seedbed or in the open field, taking care to cover the seed as soon as possible.
Germination usually occurs within 2 – 3 weeks. The young seedlings raised in seedbeds are then placed in individual pots and transplanted in summer.
The seed has a long vitality.
Propagation can also take place by division in spring even if with difficulty.

Customs and Traditions –
Verbascum nigrum, like other species of mullein, was formerly used in the preparation of drugs by virtue of its toxic, emollient, soothing and anti-inflammatory properties.
The plant was used for medicinal purposes, but it contains toxic principles, especially in the seeds (saponins).
Among the pharmaceutical properties it should be remembered that the pharmacological action is linked to the ability to swell in water producing plastic masses or viscous dispersions which, if ingested, can have mechanical-osmotic laxative actions. Used externally in packs, they have a protective and anti-inflammatory action on damaged skin and mucous membranes.
It has toxic, anti-inflammatory, emollient and soothing properties.
Specifically, the flowers and leaves are anodyne, antiseptic, astringent, emollient, expectorant and vulnerary.

Preparation Method –
Verbascum nigrum is a medicinal plant whose leaves and flowers are used.
The plant is harvested when it is in bloom and must be dried quickly and carefully, otherwise it easily loses its medicinal qualities.
An infusion is used internally in the treatment of various respiratory ailments including cough, bronchitis, asthma, and throat irritations.
The infusion of fresh or dried flowers in olive oil is used to treat earaches, sores, wounds, boils, etc.