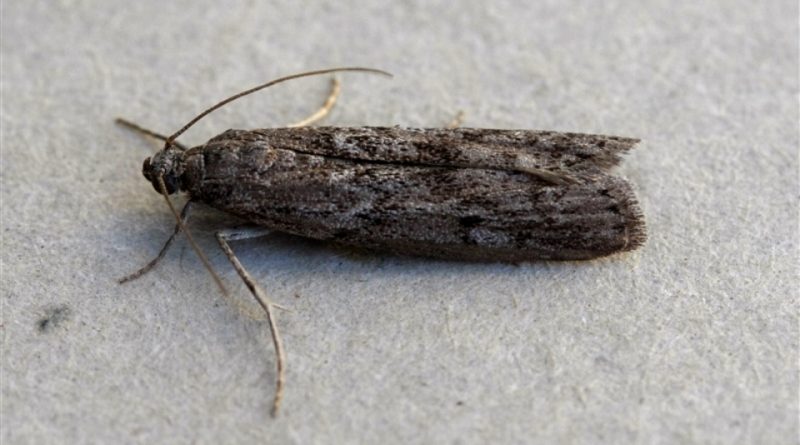 The Mediterranean flour moth (Ephestia kuehniella Zeller, 1879) is an insect belonging to the Pyralidae family.

Geographic Distribution and Habitat –
Ephestia kuehniella is a moth that was first recorded as a weed species in Germany in 1879, and was subsequently found in several European locations.
In the late 19th century, roller mills made the moth a more widespread pest. It became a common species in Great Britain, North America and Australia in 1980 and is now found all over the world, although it tends to be rare in the Far East with the exception of Japan. Areas of the world with temperate climates are very likely to have infestations in their mills.
This moth feeds mainly on stored cereals and, specifically, on cereal flours and other preserved products; various kernels, beans, peanuts, dried fruit, dried mushrooms, spices, pasta, chocolate and more.
This butterfly is a parasite particularly present in mills and also in bakeries, especially when checks are infrequent. Furthermore, the temperature of the mills allows them to reproduce throughout the year.

Morphology –
Ephestia kuehniella is a small butterfly with a wingspan ranging from 1.5 to 2.6 cm.
The body is light gray in color.
The front wings are gray with zigzag markings while the hind wings are whitish.
The larvae, about 20 mm in size, are white or pink with black spots and a black head. They have tufts of hair and short legs and pseudo-legs.
The pupae are reddish-brown in color.

Attitude and Life Cycle –
Ephestia kuehniella generally survives the winter as a larva, but also in other stages of development.
The larvae become crystallized in a small cocoon among the preserved foodstuffs; development from egg to adult generally takes about two months. The number of annual generations is variable (minimum three) depending on the climatic and environmental conditions; in hot environments the cycle does not stop and continues even during the winter; in fact it prefers warm temperatures for a more rapid development, but can survive various climatic conditions.
Females lay eggs on the second night after emergence. This is because it takes a few hours for the sperm to move from the copulatory bag to the vestibule, where fertilization takes place.
They lay between 116 and 678 eggs in a food source, such as flour, to which the eggs often attach themselves. When the eggs hatch, the larvae produce silk filaments on themselves. About 40 days are spent maturing inside these. Adult larvae disperse to new locations and spin silk cocoons in which they develop into pupae. Adult moths emerge in 8-12 days.
In the warm season, the entire life cycle of the moth can take no more than five to seven weeks. Although this moth prefers warm temperatures because it can develop more quickly, it can complete development at temperatures between 12 ° C and about 30 ° C.
Ephestia kuehniella is largely influenced by the circadian rhythm. Adult emergence most often occurs during the day, while other adult activities, including male courtship, mating, and spawning, typically occur at night.
It is also a protogynous species, so females emerge much earlier than males. This mechanism can be used to reduce inbreeding, as females emerge and mate with other males before their siblings flicker. Females also release pheromones as a lure to show males when they are most fertile.

Ecological Role –
Ephestia kuehniella larvae attack flour deposits or other grains in search of food but the greatest damage occurs when they interfere with machinery in mills. The web-like material that the larvae produce clogs the machines. Often grain mills have had to close due to this problem. They also cause damage by biting holes in the screen prints used to sift the flour.
The damage, in general, is determined by the larvae that feed on the conserved materials; furthermore, these materials are wrapped in silky threads that form lumps also containing the exuviae and excrements. The attacked product is no longer marketable.
The most effective pest control strategy for this moth is hygiene of the facilities and sealing of grain containers to prevent infestation, but some insecticides have also been employed.
The fight and prevention against Ephestia kuehniella is based on the use of sexual traps for monitoring. The installation of the traps can take place at any time of the year, as long as the ambient temperature is above 15 ° C.
Furthermore, the prevention and fight techniques must follow some rules:
– the premises intended for storage must be perfectly impenetrable by insects. The doors and windows must have devices that allow them to be hermetically sealed. The same building must also be isolated in the foundations, to allow any disinfestation fumigations, even under pressure; the windows must be equipped with metal or nylon nets, with a fine mesh, to prevent the entry of adult insects;
– in warehouses and processing rooms, the following are effectively applied:
• food traps;
• electric discharge light traps;
• sex traps: these are particularly effective against Lepidoptera. With these traps you can get different results:
– massive capture: in this way the numerical consistency of the population is reduced, by capturing the males who can no longer make mating;
– monitoring capture: in this way the size of the population is identified and the development cycle is followed in order to determine the intervention threshold. This makes it possible to identify the most propitious moment to intervene with pesticides and only when the size of the population is such as to cause real economic damage. The threshold varies from 1 to 2 insects per trap depending on the phytophagous considered;
– the disinfestation is carried out with fumigants or with residual action insecticides; it can be done both with infestations in progress and with empty rooms, for preventive purposes.
The intervention through fumigation must be carried out by specialized personnel, subject to authorization from the Police Headquarters, the A.S.L., or the Port Authority; furthermore, the doses and periods of exposure must be strictly respected to prevent the stored product from taking on odors which are then also transmitted to bread and other derivatives.
However, it should be remembered that the application of the doses must be rigorous to avoid the onset of resistance phenomena, it is also advisable to alternate the use of the active ingredients, to reduce these phenomena.
In recent times, given the greater sensitivity and knowledge on the effects of synthetic products on human health and the ecosystem, we are moving towards the use of two new technologies: the controlled atmosphere and the refrigeration; these new techniques, which tend to replace chemical products, make it possible to limit infestations and to obtain preserved products without chemical residues.
These techniques involve specially constructed and naturally watertight environments.
The controlled atmosphere technique is carried out with the use of nitrogen or carbon dioxide in place of oxygen.
The best results are obtained with carbon dioxide which requires shorter application times, compared to nitrogen, even in the presence of a certain% of oxygen.
Insects die from suffocation and from the toxic effect of CO2 at the cellular level.
The refrigeration technique allows the products to be effectively stored for long periods as the metabolism of insects is blocked.
Refrigeration times vary depending on the chosen temperature drop, which depends on the species of insects present and their stage of development.
Conservation could also be integrated, ie using both techniques: low temperatures associated with a controlled atmosphere.
Furthermore, it should be considered, in possible future biological control programs, that this moth is subject to Wolbachia, a genus of bacteria that affects the reproduction of the host species. These bacteria inherited from the mother cause cytoplasmic incompatibility in E. kuehniella, which means that sperm and eggs cannot join to form a viable embryo. Infected males produce sperm that is compatible only with the eggs of infected females, resulting in decreased suitability for uninfected females. Different Wolbachia strains cause different levels of cytoplasmic incompatibility.
Ephestia kuehniella is also parasitized by Nemeritis canascens, a parasitic wasp of the Ichneumonidae family. The larvae of this wasp are endoparasites of this moth during the larval stage. Nemeritis larvae feed on the blood of host caterpillars. The wasp remains in its earliest stage until the host caterpillar is in its final stage of development. Parasitic larvae feed more rapidly as the host caterpillar ages, taking into account the rapid development in the final first stage caterpillars and the delayed development in the first stage caterpillars. The parasite’s variable feeding rate is attributed to the changing composition of the host blood it feeds on.
Finally, again with biological control objectives, the parasitoids of the Trichogramma are a potential control, because they can kill the host at the egg stage, before it reaches the destructive larval stage. The success of Trichogramma in biological control programs is influenced by the host’s diet and the resulting nutritional quality of the eggs. Temperature can also affect the host’s suitability for the parasitoid.