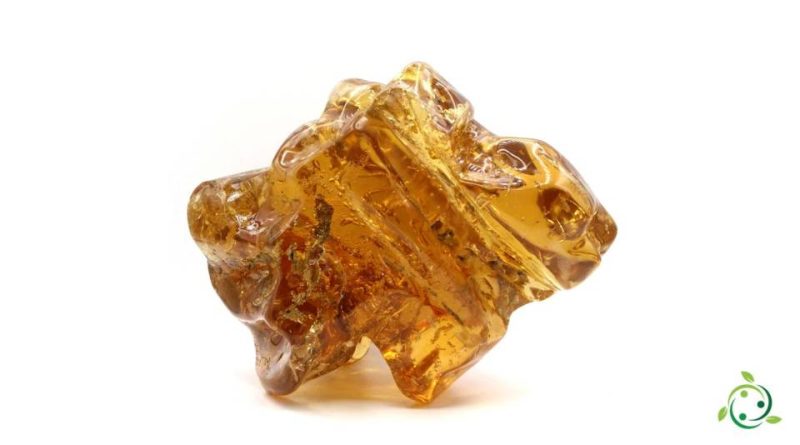 Copal, whose term comes from copalli, a Nahuatl language word meaning incense, is the trade name of a sub-fossil or fossil plant resin, known since ancient times. From a commercial and gemological point of view it is distinguished from amber, restricting the latter denomination to fossil resins of an older age. On the paleontological level, it is always an organic remnant. In mineralogy it is classified as an amorphous substance belonging to the mineralogical class of organic compounds.
This resin comes from different broadleaf species and rarely also from conifers.
Copal from Madagascar is produced from a legume still living on the island, Hymenaea verrucosa (copalier). Copal from South America is produced by several Burseraceae: gold copal from Brazil produced by Icica icicariba, black copal from Bursera microphylla and Bursera graveolens, white copal from Protium crassipetalum, copal from Colombia is produced in the Santander Department by a other legume.
The copal from the Philippines and New Zealand is instead produced from a conifer of the Araucariaceae family: Agathis dammara (locally called Kauri).
From the chemical-physical point of view, copal is similar to amber, but of a more recent age, having just begun the process of chemical-physical transformation (amberization) that will transform it into amber.

The dating of copal varies from area to area. They range from 50 years of Madagascar copal to 100 years of Colombian copal; however, some insects found in this resin have been described as early as the early 19th century and copal has been known since ancient times, so it is at least a Holocene, if not Pleistocene, resin.
The copal is easily distinguished from this for its opaque and milky appearance and for the large quantity of perfectly preserved insects and other small animals that are included.
Unlike amber, copal is much more tender and soluble in substances such as ether or gasoline. It is even possible to dissolve it completely and recover the inclusions.
The colar has a yellow, reddish-brown color, with a resinous sheen and a blue-white fluorescence.
Copal is mined in different parts of the world: Sierra Leone, Benin, Cameroon, Congo, Angola, Zanzibar, Mozambique, Madagascar, Mexico, Colombia, Brazil, Philippines and New Zealand.
In jewelry, copal is subjected to cutting; you get spheres, cylinders, cabochons used for necklaces, bracelets and earrings.