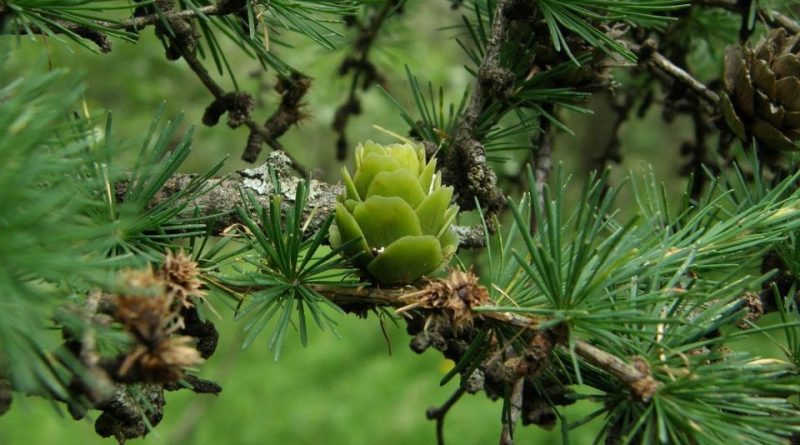 The Dahurian larch or Gmelin larch (Larix gmelinii (Rupr.) Kuzen.) Is an arboreal species belonging to the Pinaceae family.

Etymology –
Larix from the Latin name of the larch, assonant with the Greek term λᾶρός láros pleasant, referring to the aroma
The specific epithet gmelinii was attributed in honor of Johann Georg Gmelin (1709 -1755), German physician, naturalist, geographer and botanist; he carried out botanical explorations in the Urals, western Siberia and the Kamchatka peninsula, publishing Flora Sibirica.

Geographic Distribution and Habitat –
The Daurian larch is a conifer native to eastern Asia, from eastern Siberia and the adjacent north-eastern Mongolia, to north-eastern China (Heilongjiang) and North Korea and is only rarely used as an ornamental plant in parks and gardens.
It is the species of tree that goes further north (72 ° 30 ‘N, 102 ° 27’ E). However, in such extreme climatic conditions, it only grows to become a shrub shrub. Furthermore, together with the Siberian dwarf pine (Pinus pumila), it is one of the most resistant trees, able to withstand temperatures of −70 ° C without suffering damage.
In its natural habitat it tends to form huge forests in the East Siberian taiga, growing at 50 – 1,200m altitude on both marshy and well-drained soils, including shallow soils above permafrost. 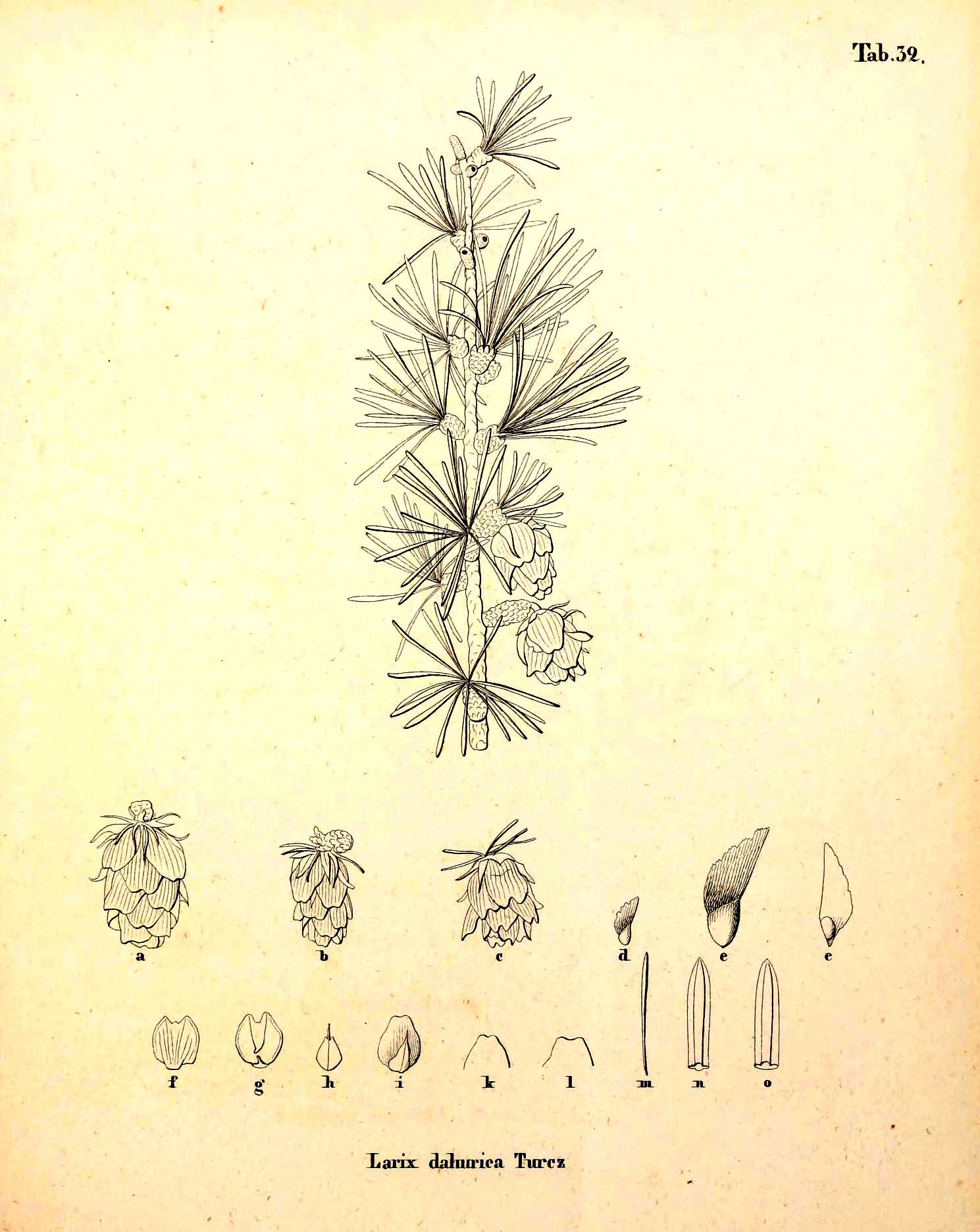 Description –
Larix gmelinii is a deciduous tree with a conical to narrow columnar habit, which can reach a height of about 35 meters.
The bark of young trees is smooth and reddish brown, but later becomes darker, gray and scaly. The bark of the young saplings, about 1 mm thick, is brownish-yellow in color and subsequently becomes brownish-gray. The leaves are needle-like, light green in color and turn yellow in autumn. They are arranged in a spiral on the long branches and in bundles of 20-30 on the short branches. Each needle measures 1.5 to 30mm in length and 0.5 to 1mm in width.
It is a monoecious plant, that is, with male and female reproductive organs present on the same plant, but in separate flowers.
The male cones, placed on short twigs, are yellow and 5 to 7 mm long.
The female cones are placed in an upright position on short twigs, to which they are joined by a curved peduncle. The strobili have a length of 0.8 to 4 cm and a diameter of 0.8 to 3 cm. They are initially crimson, but turn brown when ripe; older ones stay on the tree until the branches fall off. Each strobilus has 14 to 45 pentagonal to ovoid shaped seed scales, measuring 0.5-1.5 × 0.4-1.2 cm in the central part. Cover flakes measure one-third to half the length of the seed flakes.
The seeds are gray with light brown spots, 2-3 × 1-2 mm in size, with 10 mm bright orange-brown fins.
Pollination takes place from May to June and the seeds ripen in September.

Cultivation –
Larix gmelinii is a conifer that is occasionally cultivated in botanical gardens in Europe and North America; It is not an easy tree to grow in areas with mild winters as it adapts to a long winter rest period.
This conifer is the tree that grows further north (72 ° 30 ‘N, 102 ° 27’ E) although in these extreme conditions it grows only in the form of a crumpled shrub. It can withstand temperatures of −70 ° C without being damaged.
In its native region, daily minimum temperatures above freezing do not occur until late May or June, with no further frosts until the end of the short summer.
In cultivation it tolerates light shade, but is intolerant of full shade, dry soils and most urban pollutants. The best performance occurs in temperature conditions that mirror its natural habitat, namely cool summers and persistent cold winters.

Customs and Traditions –
Larix gmelinii is a conifer that forms huge forests in the eastern Siberian taiga, growing at altitudes between 50 and 1,200 m above sea level.
This plant is occasionally grown in botanical gardens in Europe and North America.
This plant is used for its wood and, from an ecological point of view, its conical scales are used as food by the caterpillars of the moth Cydia illutana. Moreover, being the plant that goes further north, it also represents an effective refuge for some fauna species.

Preparation Method –
Larix gmelinii is a plant whose timber is used while no food or medicinal uses are known.