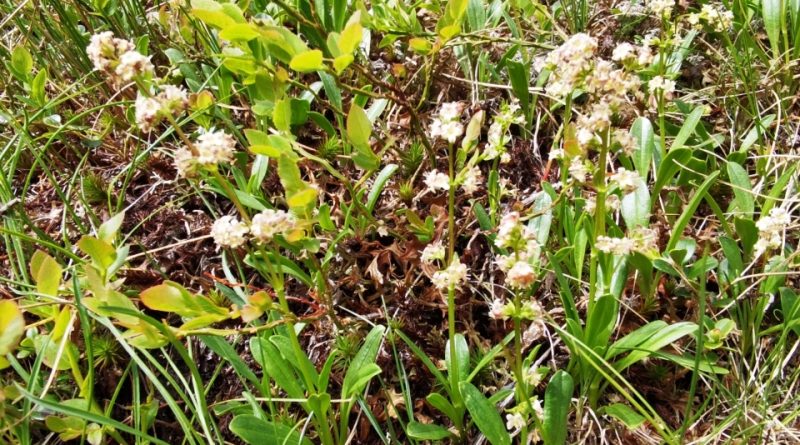 Etymology –
The term Valerian comes from the medieval Latin valerian, attested from the 10th century, at the origin of the vulgar name in many European languages ​​including Italian, of a disputed etymology; the most accredited hypothesis traces it back to the diocletian province Pannonia Valeria, in western Hungary, where the plant would have been abundant; others connect it to the verb to be in good health, due to its officinal virtues (more likely a case of a posteriori paretymology); others to different characters named Valerius or Valerianus; others derive it from the German baldrian (and not vice versa), which could be connected either with the god of light Baldur or with the hero Wieland, in allusion to the magical properties of the plant as a demon-chaser.
The specific Celtic epithet refers to the Celts, an Indo-European population that settled in central Gaul (France) in Roman times.

Geographic Distribution and Habitat –
Celtic Valerian is a plant native and endemic to Central Europe and until the 1930s it was widely cultivated for export to Asia for use in perfumery.
Its natural habitat is that of the alpine and mountain areas between 1800 and 2800 meters. 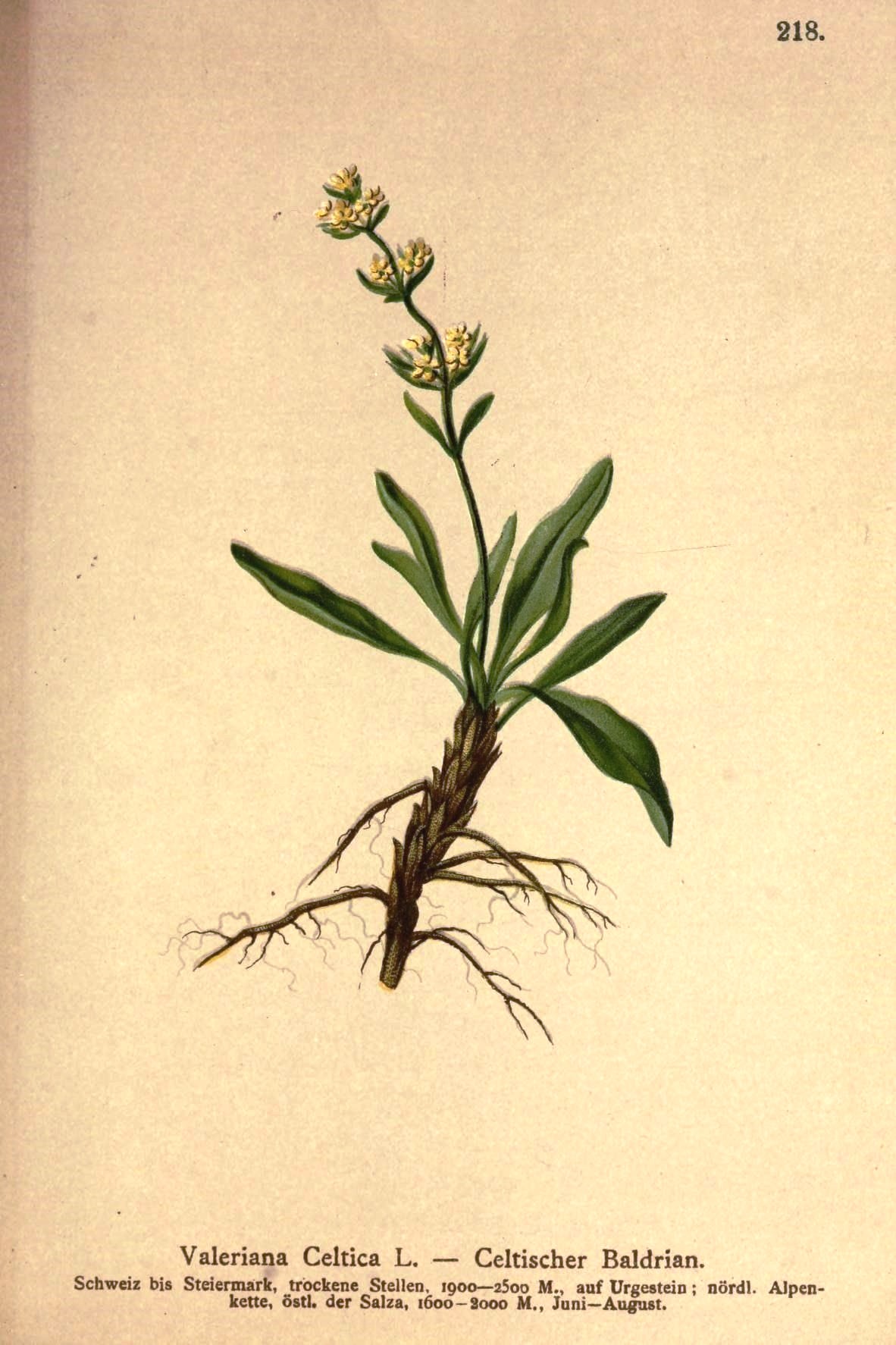 Description –
Celtic Valerian is a perennial herb that grows up to a maximum height of about 0.20 meters.
The stem is erect and the leaves are opposite and without stipules, lanceolate in shape and with a whole lamina of a beautiful intense green color.
The slightly perfumed flowers are gathered to form a particular type of inflorescence called corymb; they are hermaphrodites, with reduced calyx and corolla with 5 petals, tubular and whitish in color; the androecium is composed of 3 stamens, the gynoecium by a tri-carpellar pistil with an inferior and unilocular ovary.
Flowering occurs between June and September and pollination is entomogamous (by means of Insects).
The fruit is a striated achene with feathery bristles deriving from the modification that the small teeth of the calyx undergo with maturation. Their presence helps their dispersion by means of the wind.

Cultivation –
Celtic Valerian is a perennial plant that is mostly harvested in nature for local use as a food, medicine, and source of materials. It was once widely cultivated.
This plant can be grown in many types of soils but it is a calcifuge species which therefore requires a basically acidic pH.
Propagation occurs by seed. Sowing should be done in the spring in open fields or in pots, taking care to lightly cover the seed.
If planted in a seedbed, you can then proceed with the transplant in the open field when the seedlings have released the first leaves.
It can also propagate by division of the larger tufts in the late spring period.

Customs and Traditions –
Celtic Valerian is a plant that until the 1930s was widely harvested or cultivated to be exported to Asia for the production of perfumes.
Today it is an almost forgotten plant, with particular qualities which, however, in some areas of Europe is still harvested according to centuries-old traditions.
Already 2500 years ago the Celtic Valerian was used in Egypt and in the East for its intense and aromatic perfume and for its particular cosmetic properties.
In North Africa and Europe perfumed baths were made with this plant and the brides’ skin was rubbed with it before the wedding.
Over time, however, the Celtic Valerian was gradually forgotten until it was rediscovered by Walter Rau who in 1928 founded the company “Speick Naturkosmetik” in Germany.
Fascinated by perfume, Rau had the vision of creating a unique product: Speick soap. This natural flavor, sweet on the skin, is a cosmetic revolution as it acts as a body treatment even more than for skin cleansing. The company is the only one in the world authorized to use Celtic valerian for its products and the “Speick” brand. Today this precious alpine plant is used not only for Speick soap, but also for a wide range of natural cosmetic products: lotions, oils, masks and sun creams.
The root has been used as a folk remedy as a nerve tonic.
This plant has, in fact, a relaxing effect on the nervous system and at the same time stimulating on the vegetative system. It relaxes without causing fatigue and revitalizes the body and soul.
Since 1936, Celtic valerian has been a protected species to defend it from excessive harvesting that threatened to cause its extinction. Today Celtic valerian can only be harvested in the Nockberge Biosphere Park, in the Bad Kleinkirchheim area, where the ideal habitat and soil for its growth is located.
The concession is entrusted solely to the Huber and Steiner families, two families of Carinthian mountaineers who live at an altitude of 1600 meters in the Nockberge mountains. Collecting Celtic Valerian is hard work to supplement their earnings.
With a special tool, the Celtic valerian is extracted from the ground together with the root.
A whole day of work yields no more than a kilo of Celtic valerian. The harvest is stored in the old barn next to the farm, and is dried on special wooden beams, where it is regularly turned. The intense scent of Celtic valerian gives the whole barn a special scent. The drying phase lasts three weeks, then the plant is ready for processing and is collected by the staff of the Speick company.
Harvesting is limited to a maximum quantity of only 25 kilos per season, and is controlled by the Biosphere Park administration. Despite the limited quantities, the scent of the plant is so intense that very little is needed to perfume soaps and oils. The collection does not harm the Celtic valerian population, on the contrary: the sampling carried out with criteria has positive effects on the conservation of the plant, as a scientific research by the University of Environmental Sciences (Universität für Bodenkultur) of Vienna has found.
An essential oil is extracted from the roots that has a powerful aroma reminiscent of chamomile and patchouli.

Preparation Method –
Celtic Valerian is a plant whose root is mainly used.
The plant must be collected with particular attention and dried and turned continuously to avoid the formation of mold.
In addition, an essential oil is extracted from this which is used as a base for perfumery or for medicinal use.