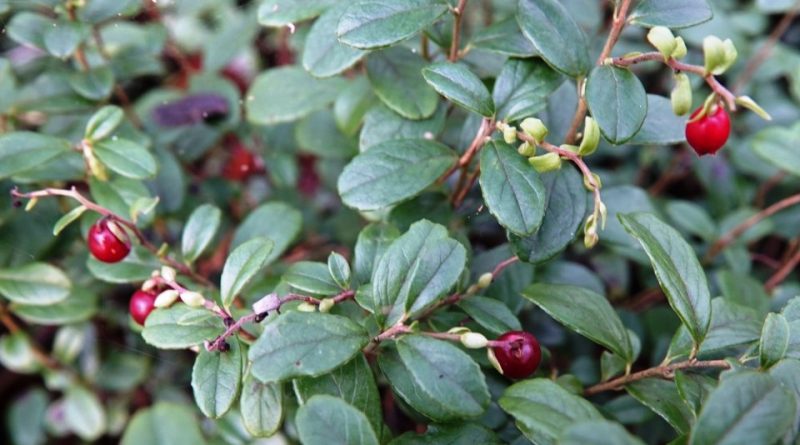 The Alpine cranberry or Cowberry (Vaccinium vitis-idaea L., 1753) is a shrub species belonging to the Ericaceae family.

Etymology –
The term Vaccinium comes from vaccinium, a plant with black berries mentioned by Virgil, of obscure derivation; the most common explanation connects it to vaccinus: of cows; Oxford Latin Dictionary and others link it to the Greek Ὑάκινθος Hyákinthos through the corrupted form vakinthos: name of a plant with violet flowers; rejecting both hypotheses, Vander Kloet and others connect it to baccínium diminutive of bácca berry: which produces small berries.
The epithetecific vitis-idaea comes from the vine of Mount Ida, considered sacred on the island of Crete, where Zeus (Jupiter, for the Latins) was raised.

Geographic Distribution and Habitat –
Vaccinium vitis-idaea is a plant native to the circumboreal forests of northern Eurasia and North America, and extends from the temperate area to the subarctic climates, through Europe (from the south to the Alps), Asia (towards the Northern Turkey, Northern China and Korea) North America (to British Columbia, Connecticut).
Its habitat is that of sunny mountain prairies, boreal taiga in mossy pine woods, peat bogs, arid and rocky sites, lichen woods, moors, promontories, tundras, cliffs, mountain peaks; at altitudes up to 1,800 meters. 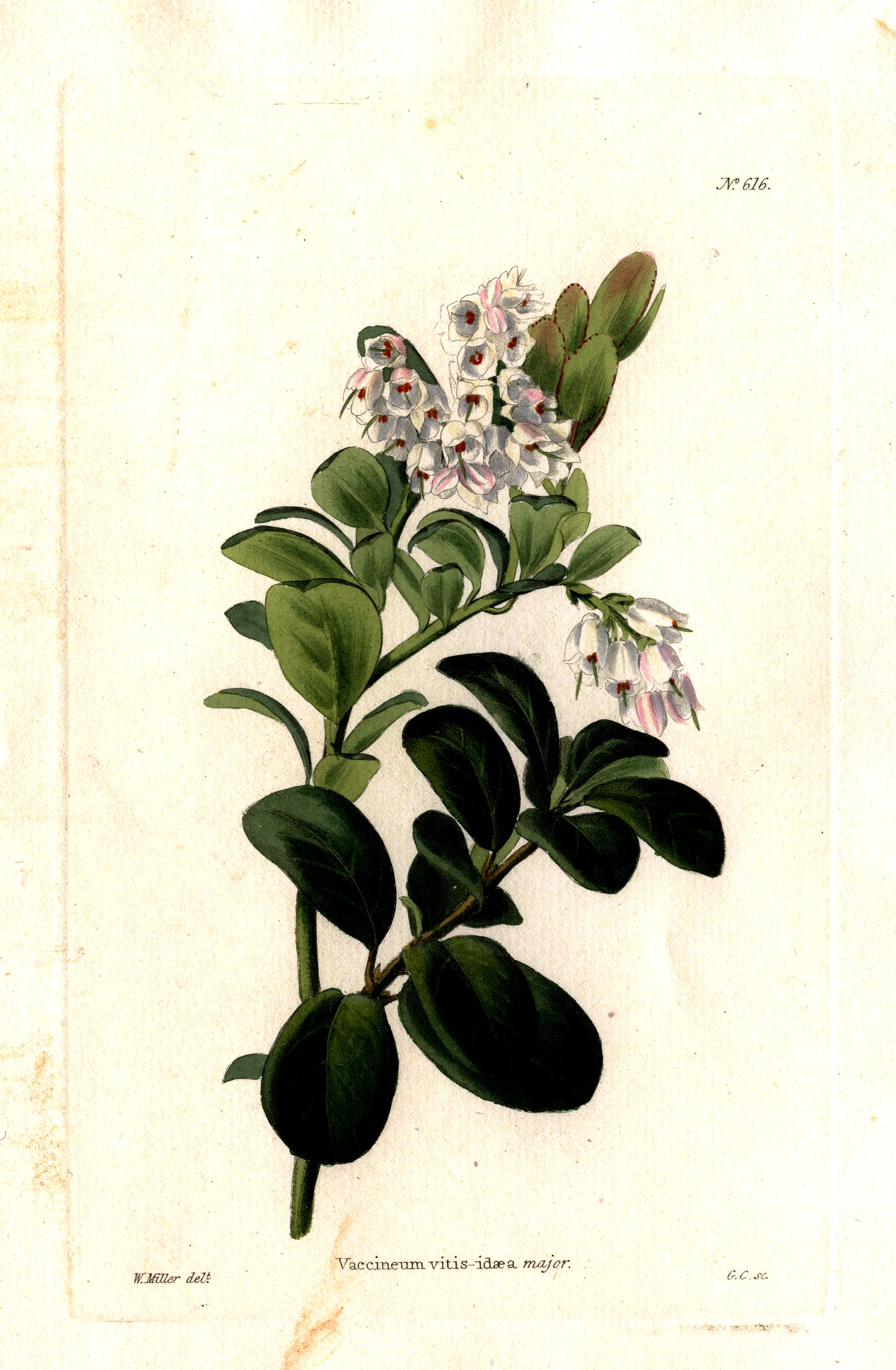 Description –
The cranberry is a small evergreen shrub that grows in the form of semi-woody polloniferous bushes, with a perennial stem and horizontally developing creeping stems (stolons), up to 2-3 meters long.
It has small, oval leaves, bright green on the upper side, paler on the lower side. The vertical shoots (5-8 cm) that develop from the buds on the stolons, can be vegetative or give rise to the fruit. In swampy areas it can give rise to dense intertwining of shoots and roots. In height it does not exceed 20-30 cm.
The flowers are pinkish-white, bell-shaped, facing the ground. They are made up of 4 petals curved backwards and can be single or collected in small clusters.
The antesis is in the second half of the summer.
The fruits are round and edible berries, of about 0,5-1 cm of diameter; their skin is shiny and hard, of a bright red color that turns to dark red with the progress of maturation. The pulp is dense and rich in seeds, with a sour and astringent taste due to the high content of tannins, which give the cranberry antioxidant properties.

Cultivation –
Vaccinium vitis-idaea is an evergreen dwarf shrub that also grows in the wild and used for local use as food and medicine, and sometimes also for the commercial exploitation of the fruit.
It is also grown as a fruit crop and is sometimes grown as an ornamental, where it can be used to form a ground cover.
Vaccinium vitis-idaea is a plant from the colder regions of the temperate zone, which experiences very cold and often long winters with short summers that can vary from cool to hot.
It requires a soil free of limestone, moist but draining, preferring one rich in peat or a slightly clayey soil.
From the pedological point of view, it prefers a very acid soil with a pH between 4.5 and 6, and the plants soon become chlorotic when light limestone contents are present.
To be cultivated it requires, moreover, positions in full sun or light shade even if it bears much better fruit in a sunny position; it also requires shelter from strong winds.
Fruit yields are generally higher on peaty soils. The maximum yield in specialized cultivation can reach 8.15 tons per hectare.
Propagation occurs by seed. Sowing should be done at the end of winter in a greenhouse in a limestone-free soil, slightly covering the seed.
The stored seeds may require a period of up to 3 months of cold stratification.
Once the young seedlings have reached a height of about 5 cm, they should be placed in individual pots and grown in a shaded position.
The transplant in the open field must be carried out the following year.
It can also be propagated by semi-mature wood cuttings, of 5 – 8 cm, in the period of August in the shade.
Another propagation system is through suckers in spring or early autumn.

Customs and Traditions –
Vaccinium vitis-idaea is a plant that, as well as in the food industry, is used in the cosmetic industry in the form of soaps, perfumes, creams, but also in the pharmaceutical industry, which exploits the antioxidant and antibacterial properties of its components.
In edible use, both raw and cooked berries are used which have a very pleasant taste, with an acid flavor, used like blueberries in preserves and considered by many to be superior to cranberries.
The fruits are sometimes used commercially: they are made into dry powder for the preparation of jellies and occasionally as a filling for caramel desserts. These have the following composition: sugar 8.57 – 11.8%, free acids 2.2%, benzoic acid 0.075%, tannins 0.224%. Benzoic acid represents the fermentation inhibitor. This acid is present in free berries as well as in the form of the glycoside vaccinin, a compound of benzoic acid and glucose.
Also for food use, a tea is obtained from the leaves which, however, should not be drunk regularly because it contains the toxin arbutin.
In medicinal use, the leaves are antiseptic, astringent, diuretic, refrigerants.
They are used in the treatment of gonorrhea, arthritis, rheumatism, diabetes and diarrhea.
The leaves contain 5 – 7% of arbutin and 0.5 – 6% of flavanol.
The leaves are also used as a cure for sore throats, coughs and colds, while the juice has been used in gargling to treat sore throats.
The plant is used in the treatment of irritation of the urinary tract, gout, arthritis and kidney stones and used orally as a disinfectant of the urinary tract, diuretic and antiviral (even if they are poorly specified which parts of the plant in particular).
The plant also contains hydroquinones, which act as alkaline urine disinfectants. Likely safe as a short-term treatment, long-term hydroquinones can cause liver damage.
Among others, agroforestry ones are mentioned: in fact, Vaccinium vitis-idaea is a useful ground cover on acid soils where it forms a dense vegetal carpet.
Furthermore, the flowers produce a lot of nectar and are very attractive to bees; moreover, the flowers are also produced when spring temperatures are too low for many other flowering plants. Good quality honey is produced.
Among other uses, it is still remembered that a yellow dye is obtained from the leaves and stems, while a purple dye is obtained from the fruit.

Preparation Method –
The fruits of Vaccinium vitis-idaea are tasty, rather sour or even bitter and are used to prepare jams and have excellent aperitif properties.
An excellent jam is obtained.
Blueberry jam is the most frequent and traditional preserve, used for pies, desserts, ice creams, etc.
It is prepared by macerating the blueberries with sugar and then cooking them to the desired consistency.
Ingredients: 1 kg of blueberries, 800 g of sugar
Preparation: Clean the blueberries. Wash them. Put them in a saucepan with the sugar. (Half to 2/3 the weight of blueberries). Leave to rest for 24 hours.
Simmer, stirring often, until desired consistency.
Pour the hot jam into glass jars. Close tightly.
Blueberry jam, blue-black in color, if properly prepared and preserved, can be consumed up to one year after preparation.
You can also make a blueberry and gooseberry jelly.
You need 700g of blueberries, 300g of gooseberries, sugar.
Gently clean the blueberries and gooseberries, put them on the fire in a saucepan with 1 ½ glass of water; bring to the boil and cook for 6-8 minutes. Remove the fruit from the heat, pour it through a fine sieve and strain. Add an equal amount (or even less, depending on your taste) of sugar to the juice obtained, mix well. Cook over high heat and, when the syrup has thickened, pour it into the jars.
Another preparation is that of blueberries and grappa.
In this case, a bottle is filled up to the neck with peeled and washed blueberries.
Melt 500 g of sugar in half a liter of grappa.
Pour the sweetened grappa into the blueberries and leave to rest for a few months, shaking from time to time.
The leaves are also used, which are harvested in early summer and dried for later use.
In addition, ripe fruits are eaten fresh or dried as a remedy for diarrhea.