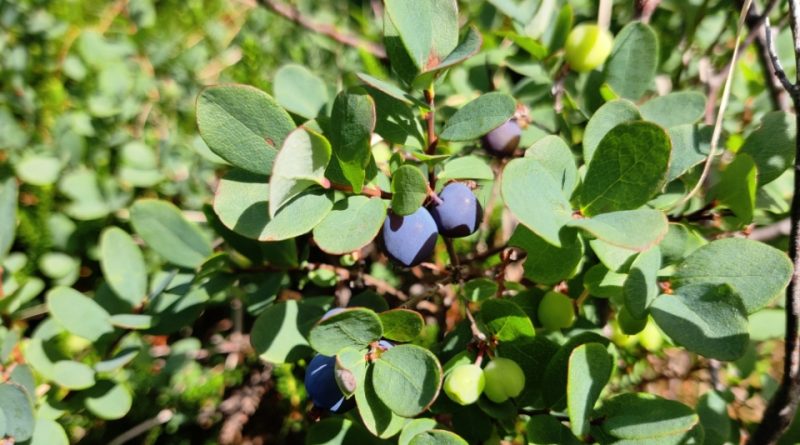 The Bog bilberry or Bog blueberry or Western-huckleberry (Vaccinium uliginosum L., 1753) is a shrub species belonging to the Ericaceae family.

Etymology –
The term Vaccinium comes from vaccinium, a plant with black berries mentioned by Virgil, of obscure derivation; the most common explanation connects it to vaccinus: of cows; Oxford Latin Dictionary and others link it to the Greek Ὑάκινθος Hyákinthos through the corrupted form vakinthos: name of a plant with violet flowers; rejecting both hypotheses, Vander Kloet and others connect it to baccínium diminutive of bácca berry: which produces small berries.
The specific epithet uliginosum comes from ulígo-ulíginis soil moisture: plants of humid places.

Geographic Distribution and Habitat –
Vaccinium uliginosum is a plant found in Eurasia: from Norway to Spain, from east to northern Asia to Japan and Korea; in North America – from Alaska to Newfoundland, as far south as California, Minnesota, New York.
In Italy it is found in different regions of the north and center, distributed over the Alps and the Apennines.
Its habitat is that of marshes and wet woods in the mountains and moors where it grows in acid and nitrogen-rich soils; in Europe it is found from the mountain to the alpine level in megaforbieti, alder, spruce, acid bog, moorland beyond the limit of the wood between 1300 and 3000 meters. In Italy there are the sub species: Vaccinium uliginosum subsp. microphyllum (Lange) Hultén and Vaccinium uliginosum var. uliginosum. 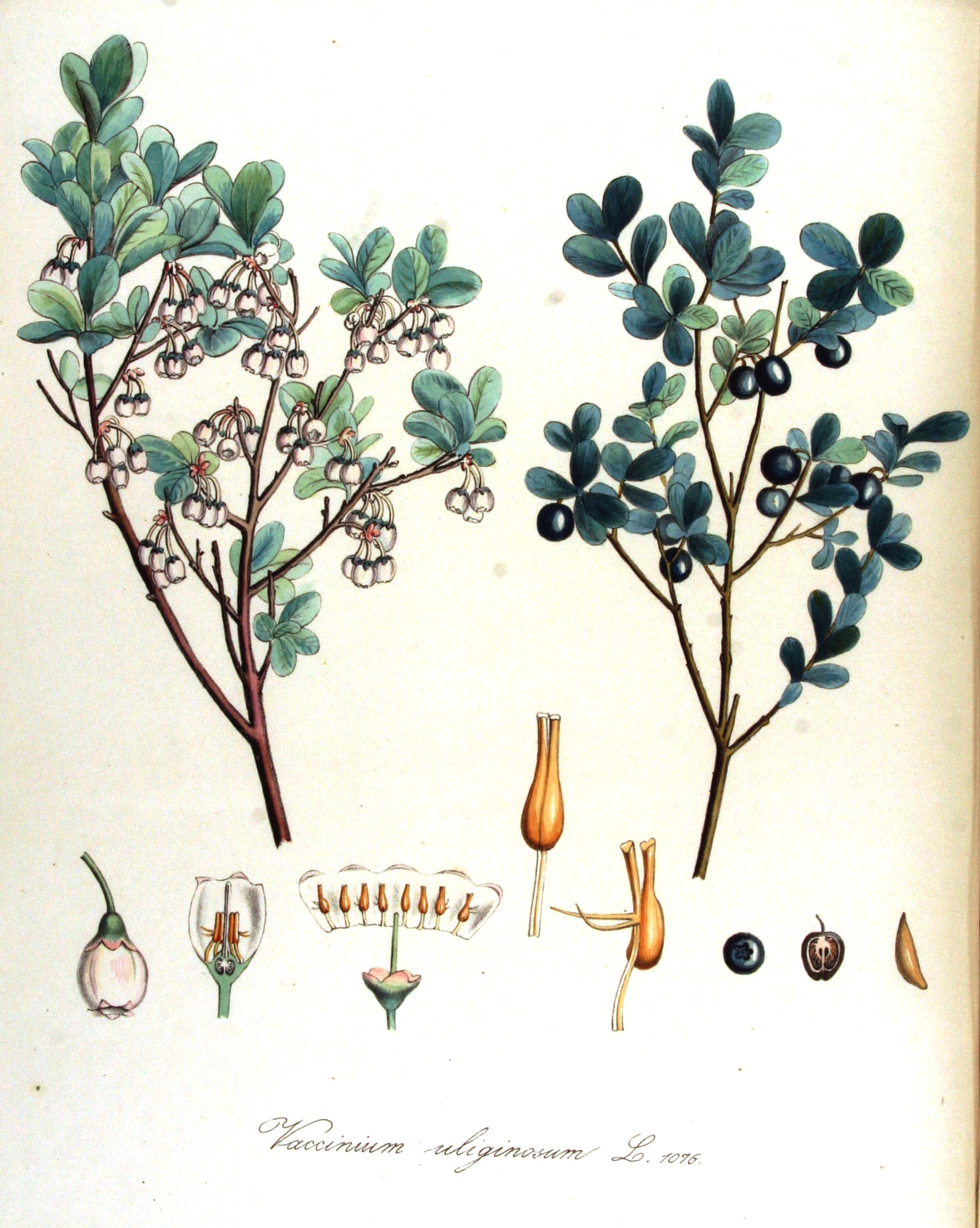 Description –
The Bog bilberry is a shrubby plant, up to 75 cm tall, perennial, with erect or partially prostrate stems, with a circular section, very branchy, twisted, with a dark gray bark; rhizome root.
The leaves are deciduous, spiraled, with short petiole and elliptical to obovate lamina (4-12 x 6-25 mm), spatulate with maximum width in the median part, rounded at the apex, whole, membranous, opaque above and glaucous- pruinose underneath, glabrous and without glands, dark green in color and with reticulated ribbing; stipulations absent.
The flowers are solitary or in groups of 2 or 3, at the axil of leaves, pendulous, on peduncles as long as the corolla, hermaphrodites, tetrameters or pentamers, pentacyclics, actinomorphs, gamopetals; calyx with united sepals and 1.5 mm teeth, rounded, scariose and reddened; 4-6 mm corolla, urceolata, white-pink with petals completely welded in cupped corolla with very short, revolute or slightly reflected lobes; stamens 10, with hairless filaments and dehiscent anthers for apical pore with subulate appendages; 5 carpels welded into an inferior ovary carrying 1 stylus included in the corolla.
The fruit is a bluish and pruinose berry, subspherical, with a diameter of 5-8 mm with persistent style and residues of the calyx, sweet and insipid, with some seeds inside.
The seeds are oval, slightly crescent-shaped, 1-2mm long and ocher to dark brown in color.

Cultivation –
Vaccinium uliginosum is a deciduous shrub whose berries are traditionally harvested in large quantities in nature to be used as food, while the plant also has medicinal properties. It also has value for use in the remediation of polluted soils.
It is a plant that requires moist limestone-free soil, preferring one rich in peat or slightly clayey soil with the presence of decaying leaf substrates.
The pH ranges from 3.5 to 6.2 and plants quickly become chlorotic when limescale is present.
It grows in full sun or light shade even if it bears fruit better in a sunny position, it also requires shelter from strong winds.
In the roots there are mycorrhizal associations that allow an increase in nitrogen levels in plants.
Propagation occurs by seed. Sowing should be done at the end of winter in a greenhouse on a limestone-free substrate with a light seed cover.
Stored seeds may require up to 3 months of cold stratification to germinate.
When the young seedlings have reached 5 cm crica they should be placed in individual pots, in a slightly shaded position in the greenhouse at least for their first winter. The transplant in the open field should be carried out in late spring or early summer, after the last foreseen frosts.
It can also be propagated by agamic way with cuttings of semi-mature wood, of 5 – 8 cm, in the period of August. Rooting is however slow.
Finally, another method is that by dividing the suckers to be carried out in spring or early autumn.

Customs and Traditions –
Vaccinium uliginosum is a plant whose fruits and leaves are used.
In addition to food purposes it is also used in the medicinal field; it has antiseptic, astringent, carminative, hypoglycemic and hypnotic properties.
The fruits can be intended for fresh consumption or for jams and marmalades even if they are much less tasty than those of Vaccinium myrtillus.
The leaves alone or together with the fruits are also used to make a tea-like infusion.
The berries of Vaccunium uliginosum were mixed in Siberia with the extract of Amanita muscaria and the whole was consumed as intoxicating.
They were probably one of the many additives to beer. A possible toxicity of the fruits of Vaccinium uliginosum L. has therefore been hypothesized, but so far no active principle has been found to which to attribute it.
However, there have been reports of intoxication with psychomotor excitement, vomiting, mydriasis, dizziness, hot flashes, visual disturbances, difficulty in swallowing, fatigue after having ingested about 300 g of blueberry, while other authors have not found any disturbance after ingestion. even of large quantities of berries.
It is believed, but research is still ongoing, that the toxicity of Vaccinium uliginosum is due to the fungus Sclerotinia megalospora, which sometimes parasites the fruits of this species.
According to some reports, the fruits can cause headaches if consumed in large quantities but even here it is likely that it is linked to the presence of the fungus.
The fruits are very rich in vitamin C as well as tannins, anthocyanosides and flavonoids.
Other uses include agroforestry ones.
The plant tolerates high concentrations of heavy metals in the soil. Leaf tissues can accumulate uranium, copper, lead, zinc, nickel and iron in large quantities with no apparent harmful effects to the plant. The ability to vegetate on soils with high concentrations of these metals can favor the use of this plant in some remediation programs.

Preparation Method –
The fruits of Vaccinium uliginosum are edible, fleshy and sweet-tasting berries, containing various seeds.
They can be eaten both raw and cooked or in jams, preserves, jellies, etc. or dried like raisins.
An infusion of the leaves was given to women immediately after giving birth to help them regain strength.
A cold infusion of dried fruit is used in the treatment of inflammation of the mucous membranes of the gastric and intestinal tract, diarrhea and bladder disorders.