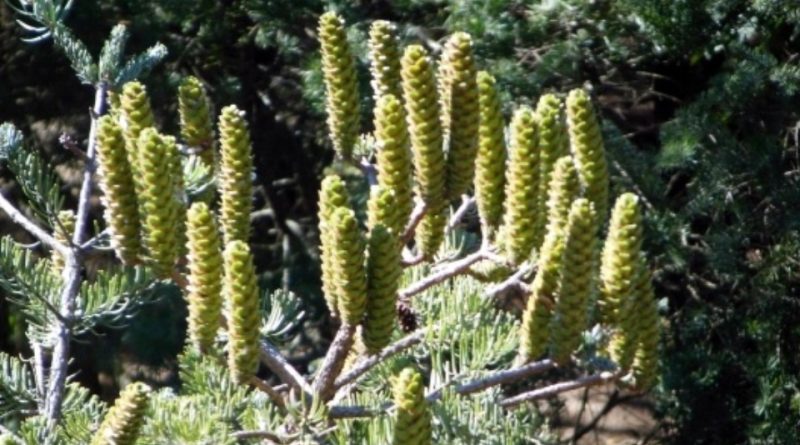 Etymology –
The term Keteleeria The genus name Keteleeria honors JB Keteleer (1813–1903), a French nurseryman. The group is related to the genera Nothotsuga and Pseudolarix. It differs from Nothotsuga for its much larger cones, and from Pseudolarix for its evergreen leaves and cones that do not disintegrate easily when ripe.
The specific Evelynian epithet comes from Evelyn, a term of English origin meaning “desired child”, which in turn derives from Aveline, a French Norman feminine diminutive of the name Ava.

Geographic Distribution and Habitat –
Keteleeria evelyniana is a conifer native to Laos, Vietnam (up to the extreme south of the Lang Bian plateau near Da Lat) and southwest China (Sichuan, Yunnan – where it probably crosses with K. Davidiana – and perhaps the Central Hainan Mountains It is the most widespread conifer in northwestern Vietnam.
Its habitat in Vietnam is that of areas at altitudes above 500 meters where the plant is intolerant to shade, prefers neutral soils and is typically associated with Pinus spp. or with species of Fagaceae and Lauraceae. 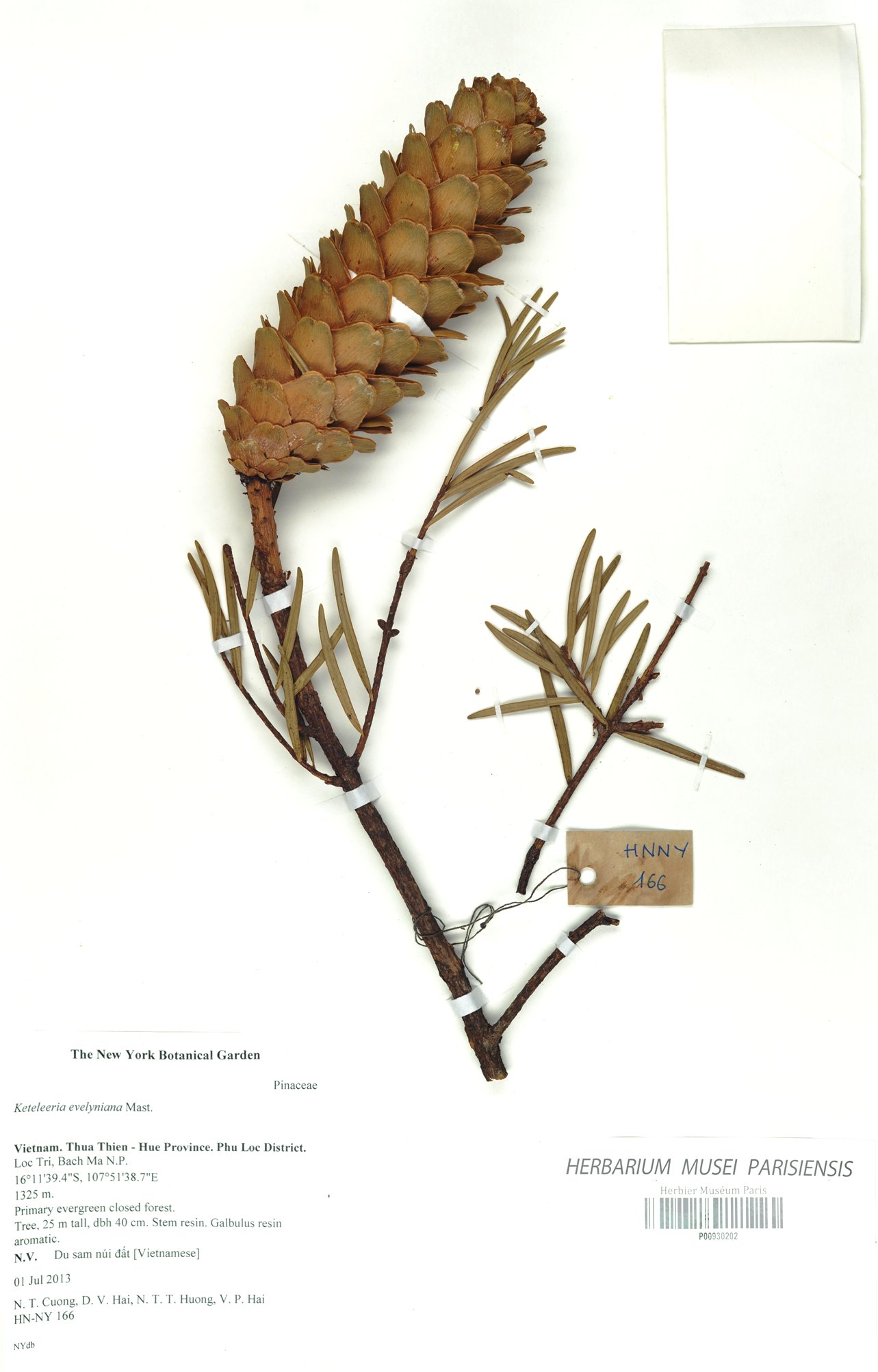 Description –
Keteleeria evelyniana is a tree that grows up to 40 m in height and with a trunk with a diameter of 100 cm.
The bark is greyish brown, irregularly and longitudinally fissured, desquamated.
The branches are reddish or brownish red, turning brown, usually initially pubescent, hairless in the 2nd or 3rd year.
The leaves are strictly linear, slightly falcate, (2-) 4-6.5 cm × 2-3.5 mm, stomatal lines (0-) 4-20 adaxially, 28-38 in each band abaxially, apex mucronate.
The cones are cylindrical, (7-) 9-20 (-25) × (3.5-) 4-6.5 cm. Seed flakes in the center of the rhombic-ovate cones, (2-) 3-4 × (2-) 2,5-3 cm, exposed part of the abaxial surface pubescent or almost glabrous, subacute apex, eroded-denticulate.
The seeds are oblong, 0.9-1.4 cm × 5-7 mm; yellowish brown wing, semi-trullated. Pollination takes place between April and May and the seed ripens in October.

Cultivation –
Keteleeria evelyniana is a conifer that grows in an area between Laos, Vietnam (up to the extreme south of the Langbian plateau near Dalat) and China in the provinces of Sichuan and Yunnan at 700-2900 m of altitude.
The plant withstands minimum temperatures between -12.1 ° C and -6.7 ° C.
It is a plant that needs full sun in order to grow as it tolerates shade poorly, also prefers neutral or calcareous soils and is typically associated with Pinus spp. or with species of Fagaceace and Lauraceae, being in some places the dominant species.
Propagation occurs by seed.

Customs and Traditions –
The Keteleeria evelyniana, known in English as Evelyn keteleeria, in Chinese: 云南 油杉; pinyin: Yúnnán yóushān, Vietnamese: Du sam is, as mentioned, a conifer native to southern China, Laos and Vietnam.
This plant is mainly used for its timber (which is resistant to insects) in construction, railway sleepers, mining timber and various household tools.
The seeds are rich in essential oil which can be used to burn and make soap.
The tree can also be used medicinally.
In 2013, the species was listed as Vulnerable on the IUCN Red List of Threatened Species after a 2010 assessment that found that the tree’s population was in significant decline and fragmented.

Preparation Method –
Keteleeria evelyniana is a plant that is mainly used for its timber and more rarely as an ornamental.
In addition, some uses for medical purposes are reported.