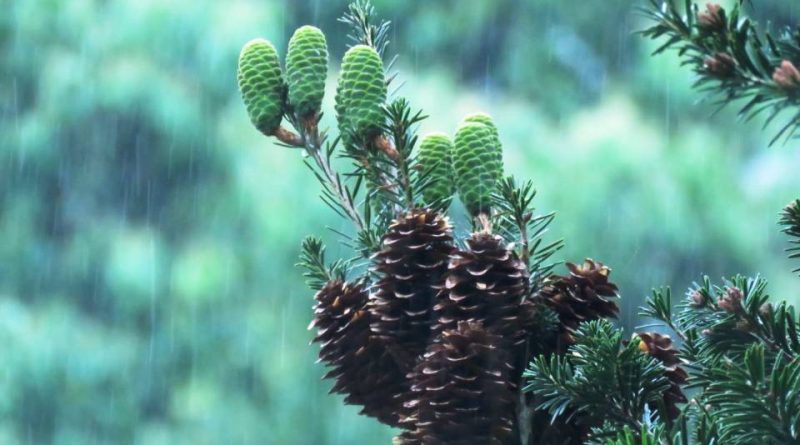 Etymology –
The term Keteleeria The genus name Keteleeria honors JB Keteleer (1813–1903), a French nurseryman. The group is related to the genera Nothotsuga and Pseudolarix. It differs from Nothotsuga for its much larger cones, and from Pseudolarix for its evergreen leaves and cones that do not disintegrate easily when ripe.
The specific Davidian epithet is linked and therefore dedicated to Father David, born Jean Pierre Armand David (1826-1900) French missionary, zoologist and botanist who collected plant samples in China, in the Sichuan region.

Geographic Distribution and Habitat –
The Davidian Keteleeria is a conifer native to Taiwan and south-eastern China, in the provinces of Gansu, Guangxi, Guizhou, Hubei, Hunan, Shaanxi, Sichuan and Yunnan and which we also find in the northernmost part of Vietnam.
This species is mostly confined to the mixed mesophytic forest, except in Guizhou and Taiwan, where it is found in the evergreen broadleaf forest. In Taiwan, the “evergreen sclerophyllous deciduous forest is located between 500-2000 m, immediately above the lowland rainforest. The species of Castanopsis, Quercus and Lithocarpus are the most important Fagaceae, the lauraceous trees are represented by Cinnamomum spp., Machilus spp., Actinodaphne spp. and many other genera. Keteleeria davidiana, Podocarpus nakaii and Amentotaxus argotaenia are the constituent gymnosperms. Pinus morrisonicola is virtually limited to rocky ridges; in the north of Taiwan, K. davidiana appears to be mainly found in the same habitats, i.e. places where broad-leaved trees are not present due to lack of water.
Its habitat is that of the hills in areas with hot and dry climates, on the mountain slopes, often solitary or in small tufts, occasionally forming populations, at altitudes of 300 – 1,500 meters. 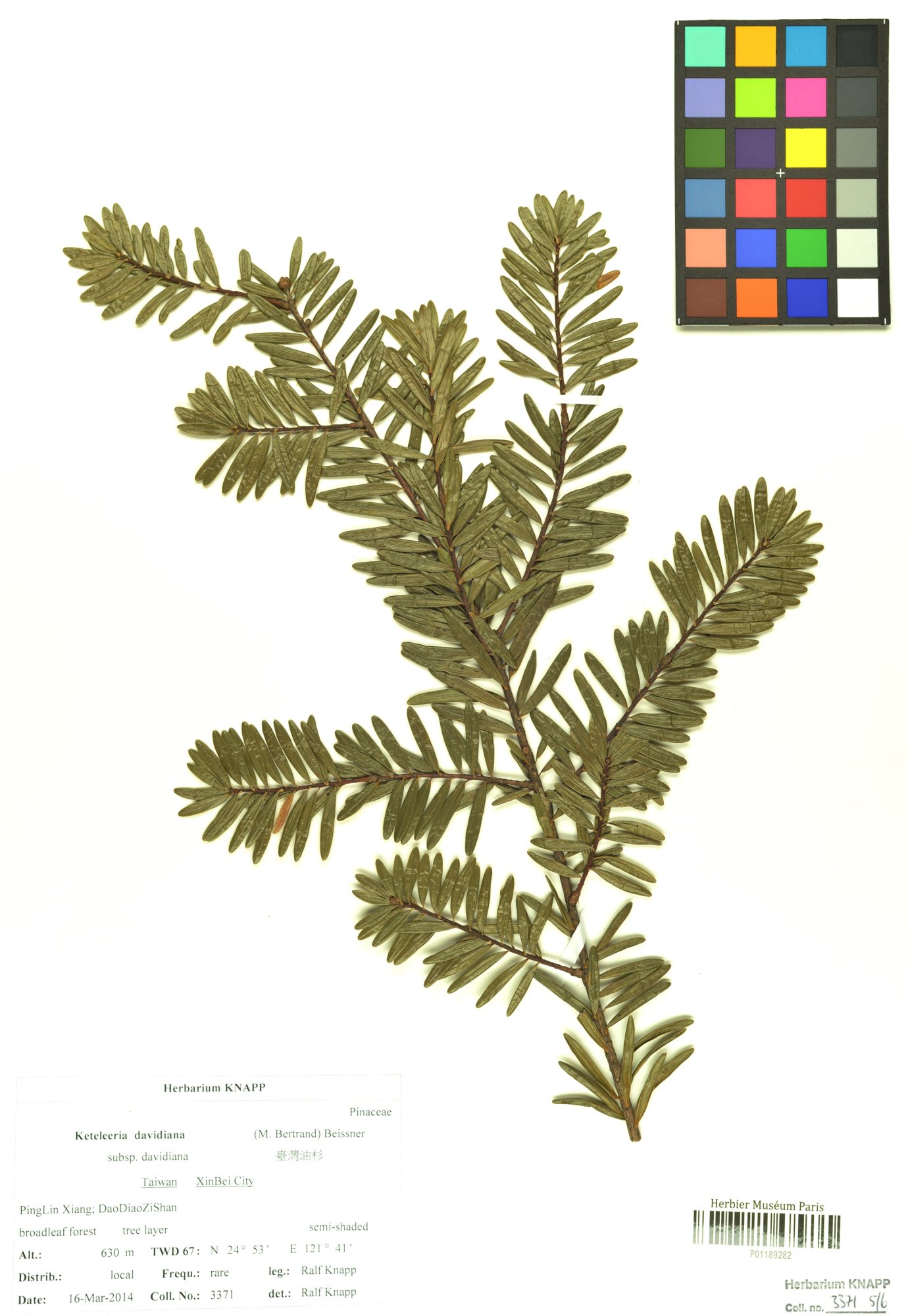 Description –
The Keteleeria davidiana is an evergreen conifer up to 40 – 50 meters high and resembles a silver fir when young but which eventually assumes an irregular shape with massive branches and large roots extending from the base of the trunk.
The bark is opaque brown to greyish black, somewhat scaly, with scales of about 4 mm; inconspicuous lenticels; outer bark about 1.3 cm. thick, layered, with alternating layers of grayish white or pale yellowish red cork layer and grayish brown or reddish brown fibrous layer; inconspicuous newly formed periderm; inner cortex 0.8-1.0 cm light brown, fibrous, with densely scattered dark brown cell clusters, more or less mucous; inconspicuous cambium and newly formed phloem.
The barely has a light yellowish red to light apricot yellow color, filiform woody rays.
Buds rounded at the apex with numerous keeled scales, which become reddish and showy in spring.
The branches are thin, densely covered with short, stiff, brown hairs, many of which remain until the end of the second year.
The leaves on young plants are linear, flat, rigid, bright dark green, up to 6.4 cm long, 3.6-4.2 mm wide, ending with a long sharp point. Those on adult trees are 15-40 mm long, and 3-4 mm wide, linear, flat, appearing in 2 rows, with prominent keel on both surfaces, whole and rounded at the apex, green above, with 2 stomatal bands light green below, sharp to obtuse or marginal apex.
The cones are carried upright; when ripe the first year, light brown when ripe, cylindrical, 7.5-20 cm long, 4-5 cm broad, on sturdy 2.5-3.2 cm long stems. Conical scales about 2,5 cm long and 2-2,5 cm broad, wider immediately above the claw-like peduncle, narrowing at the rounded and slightly reflected apex; bracts half the length of the scales, about 3 mm broad, with three-pointed apex.
The seeds are up to 13mm long with a 12-19mm long wing, or the same length as the scales, which appear longer as the scales expand, bright brown.

Cultivation –
Keteleeria davidiana is a plant that grows mostly in areas with a more continental climate than the other two species. The average annual temperature is 16.40 ° C, the average temperature of the coldest month (January) 4.5 ° C, of ​​July 27.6 ° C, in addition there are 9 months with an average temperature above 10 ° C and the growing season (frost-free days) is 275 days. The average annual precipitation is 1407 mm, there is a period of moderate drought during the winter months and it has a cold resistance between -17.7 ° C and -12.2 ° C.
In general, this plant grows best in a Mediterranean climate, with hot, dry summers and a cool, humid winter, and the tender spring vegetation can experience late frosts.
To be cultivated it requires a sheltered position in a moist but well-drained light clay soil. In its habitat it is found on forest-rich soils, but in China it is also found on red and yellow soils, which are nutrient-poor acid and podzolic soils.
For their propagation it should be remembered that this conifer does not tolerate transplanting well so the young seedlings must be placed in the open field as soon as possible, repairing them with mulches and protections for the first winter.
Propagation occurs by seed; sowing should preferably be carried out on sandy soils and in a warm greenhouse in spring.
You can also try the propagation by cuttings of main shoots of coppice plants, in summer and in the shade.

Customs and Traditions –
The Davidian Keteleeria, in Chinese: 铁 坚 油杉 or tie jian shan, is a conifer that grows in Taiwan and south-eastern China and in the northernmost part of Vietnam.
This plant is mostly used for its timber which is soft, light, resinous, fine-grained, easily workable.
It is appreciated for construction, carpentry, furniture and wood fiber.
No other uses are known and it is sometimes cultivated for ornamental purposes.
At the present time the species is considered in the IUCN Red List as least concern.

Preparation Method –
The Keteleeria davidiana is a conifer from Southeast Asia that grows mainly in populations or specimens in the natural state and which is mostly used for its timber.