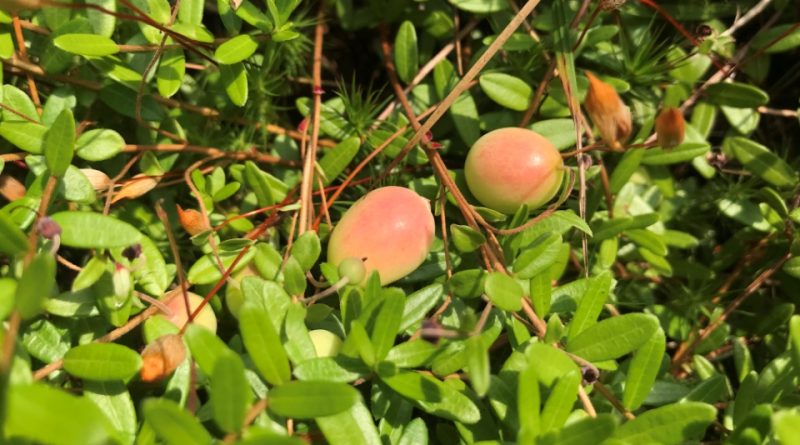 The large cranberry or American cranberry or bearberry (Vaccinium macrocarpon Aiton, 1789) is a shrub species belonging to the Ericaceae family.

Etymology –
The term Vaccinium comes from the Latin vaccinium, a plant with black berries mentioned by Virgil, of obscure derivation; the most common explanation connects it to vaccinus: of cows; Oxford Latin Dictionary and others link it to the Greek Ὑάκινθος Hyákinthos through the corrupted form vakinthos: name of a plant with violet flowers; rejecting both hypotheses, Vander Kloet and others connect it to baccínium diminutive of bácca berry: which produces small berries.
The specific macrocarpon epithet comes from the ancient Greek μακρός (makrós, “great”) + καρπός (karpós, “fruit”).

Geographic Distribution and Habitat –
Vaccinium macrocarpon is a plant native to central and eastern Canada (from Ontario to Newfoundland) and the northeastern and central-northern United States (northeastern, Great Lakes and Appalachian regions up to the extreme south of North Carolina and Tennessee) . Subsequently, the plant has also naturalized in parts of Europe and in scattered locations in North America along western Canada (British Columbia) and the western United States (west coast).
Its natural habitat is that of marshy soils and swamps, marshes, humid coasts and promontories, at an altitude from sea level up to 1,400 meters. 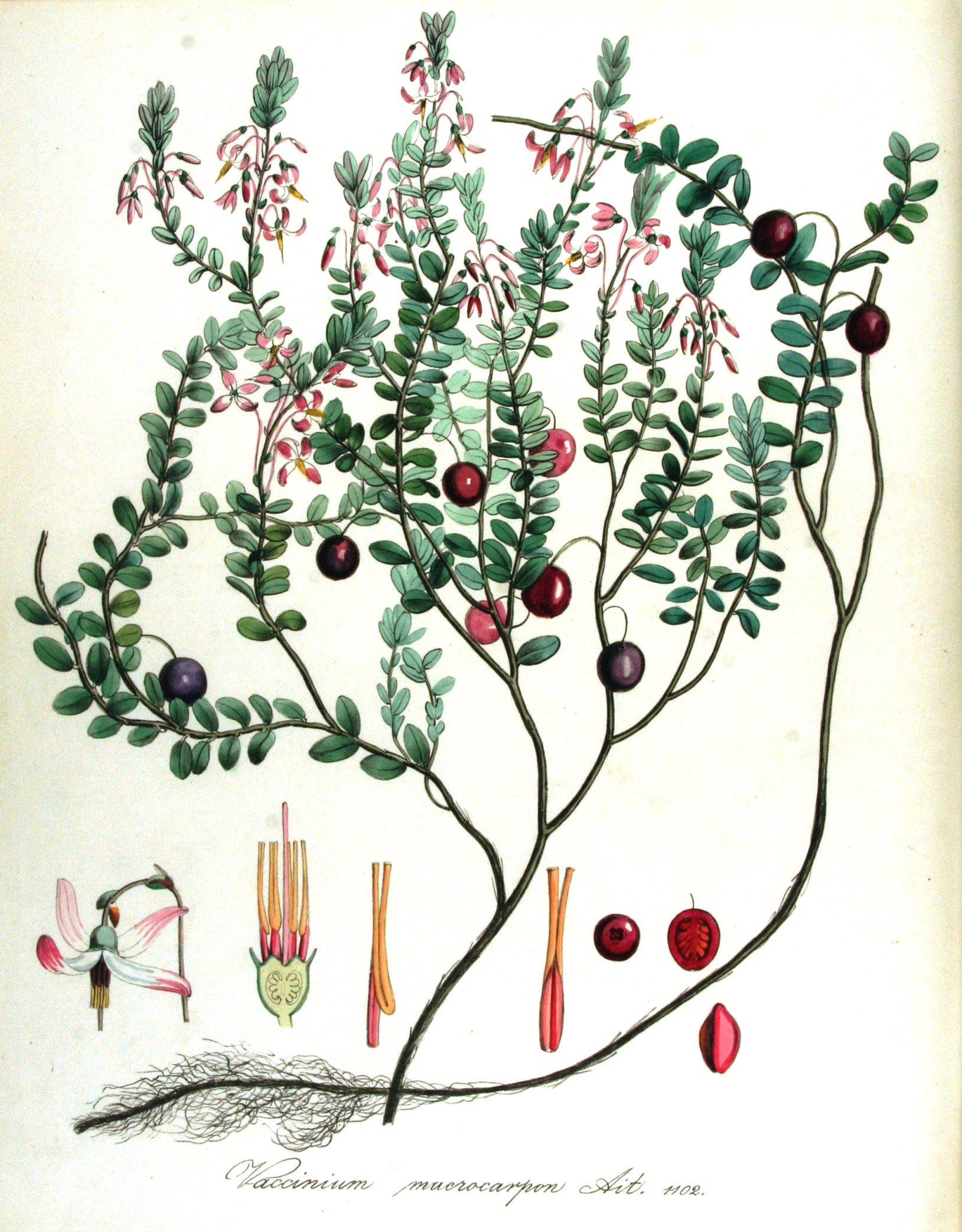 Description –
The large cranberry is a small shrub, evergreen and broad-leaved, with a low woody shrub, prostrate and pulvinate, that is, with a cushion shape, and covering the soil for a height not exceeding 20 cm, and a width up to about 1 -2 meters.
It has thin and slender branches that bear alternate leathery leaves of small size.
The flowers are small, pink in color and have backward curved petals and anthers and protruding stigma.
Flowering occurs in May-June.
The fruits are red berries of a fair size (in proportion to the size of the plant), with a diameter between 10 and 20 mm.
The fruits reach full ripeness in October-November.

Cultivation –
Vaccinium macrocarpon is a very cold-resistant plant that grows optimally in humid and marshy areas, along streams, where it often forms large monospecies colonies.
From the pedological point of view it prefers acid soils like many Ericaceae. The preferred pH is between 4 and 4.5, tolerating up to 6.1; plants quickly become chlorotic when excessive limestone is present and grow best in poor soil; in rich soils it tends to vegetate too much to the detriment of fruiting.
It is a plant that, in a suitable environment (soil and acid hydrology, and moist soil), can be grown in the open field; however, it can also be grown in pots.
It lives in a normally sunny environment, but in a very sunny environment it benefits from a modest shade, tolerating the partial shade well. Outside the natural riparian environment it needs frequent and abundant irrigation.
It also requires shelter from strong winds.
Plants are generally grown in artificial peat bogs which are often flooded in winter.
Plants can self-fertilize, but cross fertilization by insects results in higher yields.
Cultivated plants take about 5 years to reach full bloom, but then they will produce well for 60 – 100 years.
Propagation can take place by seed which is sown in peaty soils free of limestone. The stored seeds may require a period of up to 3 months of cold stratification.
After germination, the young plants (about 5 cm high) are placed in individual pots and grown in the shade for the first year.
The plant can also be propagated by cuttings in spring; in this case portions of shoots 15 cm long are taken, to be placed in a sandy substratum and in a tunnel always maintained with high humidity.
It is also possible to prepare cuttings of semi-mature wood, of 5 – 8 cm in the period of August to be rooted in a shaded greenhouse.
Also with the division of suckers in spring or early autumn.
Remember that it is a plant that does not like transplanting very much so this operation must be carried out with techniques that do not disturb the root system.

Customs and Traditions –
Vaccinium macrocarpon is a plant widely cultivated for its edible fruit in North America, where many varieties have been developed. Due to its characteristics it is considered among the berries.
More than 30% of the fruits used in the United States are grown and processed in Wisconsin, to produce preserved foods (compotes and juices), given the presence of a suitable climate and environment. The fruits are also industrially prepared frozen or dried.
In food use, fruits are consumed both fresh or dried and cooked or prepared in various ways.
Fruits, compotes, juices and derived jellies, as well as for food purposes, are also traditionally considered to have pharmacological, disinfectant and anti-inflammatory activities, particularly known for lower urinary tract infections (cystitis). However, for the latter type of infections, international medical publications show an insignificant beneficial contribution, not justifying its long-term consumption for the prevention of relapses.
Some research suggests that cranberries may suppress asymptomatic Helicobacter pylori colonization, but it appears to be secondary to antibiotic therapy in symptomatic patients.
The fruit has a strong acid component which remains in the derived products, and which contrasts pleasantly with the sweet which is also contained in the pulp of. The compotes are prepared by crushing the fruits or leaving them whole at least in part, and boiling them mixed with water and sugar, adding apple pulp, possibly not very ripe, to increase the content of pectin, which is a natural thickener, especially useful for also produce jellies. In place of apple pulp, the industrially extracted natural pectin, prepared in a ready-to-use product, can also be used for the same purpose.
The consumption of its fruits as food is very rooted in the United States and Canada, where it is traditionally the food on winter holidays, as a sour compote for Thanksgiving. Similar use occurs in Northern Europe for Vaccinium vitis-idaea (European cranberry).
Various preparations are used in medicinal use.
An infusion of the branches was used as a cure for pleurisy.
The fruit is antiseptic, antitumor, diuretic and febrifuge. It is taken, mainly as a juice, for the prevention and treatment of urinary tract infections, neurogenic bladder infections, as a urinary deodorant for people with incontinence, prevention of urinary catheter blockage, and to heal the skin around urostomy stomata. It is also used to treat type 2 diabetes, chronic fatigue syndrome, scurvy, and pleurisy.
The fruits contain anthocyanidins, ellagitannins, flavonols such as quercetin and kaempferol, catechins and phenolic acids. Other constituents include ascorbic acid, beta-carotene, chlorogenic acid, glutathione, and alpha-tocopherol.
The fruits of Vaccinium macrocarpon contain proanthocyanidins, also known as condensed tannins, and a high molecular weight compound that has not yet been identified. These constituents appear to interfere with bacterial adhesion to urinary tract epithelial cells. The fruit, however, does not have the ability to release bacteria that have already adhered to the epithelial cells of the urinary tract.
Laboratory evidence suggests that the fructose in cranberries may also contribute to anti-infectious activity.
Cranberry juice showed antibacterial activity in the culture medium against Escherichia coli, Staphylococcus aureus, Klebsiella pneumoniae, Pseudomonas aeruginosa and Proteus mirabilis.
Early evidence shows that cranberry juice may increase the antioxidant capacity of plasma.
There is also preliminary evidence that the proanthocyanidin fraction of cranberry may have anticancer activity.
Cranberry, like many other fruits and vegetables, contains significant amounts of salicylic acid, which is the active metabolite of aspirin and has anti-inflammatory, antiplatelet, and anticancer effects. Cranberry juice contains about 7 mg of salicylic acid per liter. Drinking three 8-ounce servings of cranberry juice a day for two weeks increases serum salicylate levels. It also increases the excretion of salicylic and salicyluric acids (a metabolite of salicylic acid) in the urine.
Among the other uses we also remember those agroforestry; in this case the plants can be grown as ground cover and, as such, they spread rapidly ensuring good soil coverage.

Preparation Method –
Vaccinium macrocarpon is a plant widely used for the consumption of its fruits but also for some medicinal applications.
Its fruits are eaten raw, although due to the high content of vitamin C they are often too acidic for many people to consume fresh. It is said that a teaspoon of salt added to fruit in cooking can replace half the sugar normally used.
The futti are also processed into jams, compotes, juices, ice creams, etc. and widely used in the industry of America and Northern Europe.
A common use of the berries is in gravy to serve with roast turkey.
In medicinal use, in addition to fruits, other parts of the plant can be used; for example, an infusion of the branches is prepared for pleurisy.