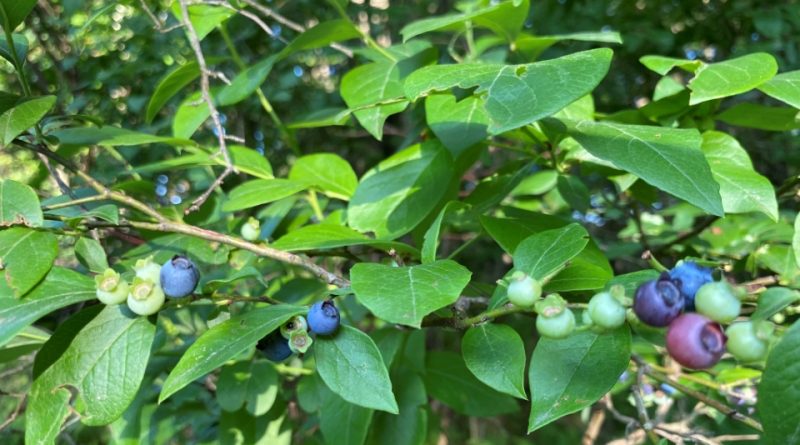 The northern highbush blueberry (Vaccinium corymbosum L., 1753) is a shrub species belonging to the Ericaceae family.

Etymology –
The term Vaccinium comes from the Latin vaccinium, a plant with black berries mentioned by Virgil, of obscure derivation; the most common explanation connects it to vaccinus: of cows; Oxford Latin Dictionary and others link it to the Greek Ὑάκινθος Hyákinthos through the corrupted form vakinthos: name of a plant with violet flowers; rejecting both hypotheses, Vander Kloet and others connect it to baccínium diminutive of bácca berry: which produces small berries.
The specific epithet corymbosum derives from the Latin meaning ‘flowers arranged in corymbs’.

Geographic Distribution and Habitat –
The northern highbush blueberry is a plant native to an area that originally stretched from northeastern Canada to northern Mexico.
Currently, the plant is widespread from eastern Canada and the eastern and southern United States, eastern Ontario, Nova Scotia and southward to Florida and eastern Texas. It has also naturalized in other places, such as: Europe, Japan, New Zealand, etc.
Its habitat is that of the cool-temperate zones, the taiga and the marshy areas of the northern hemisphere, more precisely in North America. Exposure in humid areas, with a climate similar to its natural habitat, ranges from partial shade, where it produces less sweet and more acidic fruit, to full sun, where abundant and sweeter fruiting is obtained. Even in warmer and less rainy areas the same results can be obtained as long as watering is more frequent. 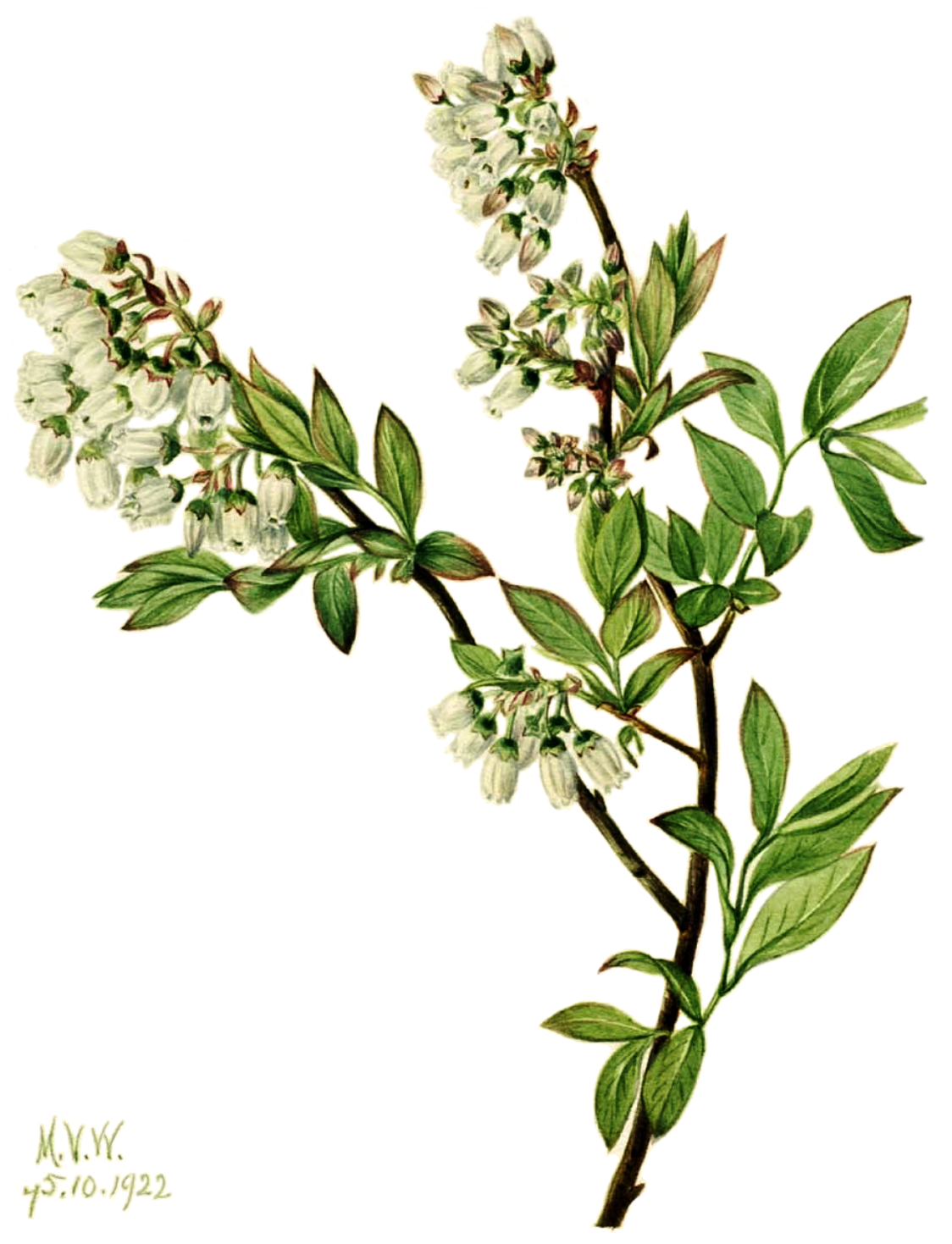 Description –
Vaccinium corymbosum is a small shrub, reaching a maximum of 2–3 m in height, deciduous and broad-leaved.
It has very fine roots that tend not to penetrate too deeply into the soil, remaining in the most superficial layers, spreading and forming an intricate network typical of many genera of the Ericaceae.
The foliage tends to collect in the sunniest positions where it thickens and forms thicker and harder leaves, while in shade and partial shade positions it tends to grow less with thinner and softer foliage.
The oldest branches of the shrub lignify producing a flaky skin with a papery consistency, while the younger ones (about one year old) are green in summer or reddish in winter. On the leaf axils there are buds of two different types: those of a more or less triangular and narrow shape are vegetative buds that will give life to new branches, while the more squat, rounded buds positioned on the apical areas of the one year old branches are the floral ones that will give flowers and fruits.
The leaves are generally ovate in shape, but in some conditions or in some cultivars they are narrower in shape and tending to lanceolate. The leaves are single per node and have a spiral phyllotaxis with one or more buds in the armpit. During the autumn period, the foliage subject to low temperatures turns red before falling.
The flowers are collected in racemose corymb inflorescences, they are bell-shaped formed by 5 welded petals of often white color, sometimes tending to pale pink. The bellflower that forms the flower falls off after the pollination period leaving the fruit. In addition, a flower is also composed of 5 sepals kept in the ripe fruit, the gynoecium is composed of an inferior ovary with a style and stigma. The inflorescences appear before the leaves and persist for a few weeks.
The fruits are false fleshy berries (as they do not derive only from the ovary, but also from the receptacle), of a color from blue to black. They vary in size, much larger than the common European bilberry (Vaccinium myrtillus L., 1753), which is why it is more profitable in cultivation and therefore more widespread on the market. In section the pulp takes on a color from light green to white with purple tones at times.
The seeds are very small, almost drop-like in shape.

Cultivation –
Vaccinium corymbosum is a plant that, thanks to its abundant fruiting, has become very cultivated, and of high industrial importance, widespread as well as in the United States and Canada, in Europe, Japan, Australia, New Zealand and South America.
This plant grows in moist, peaty and siliceous soils with an acidic pH from 3.5 to 5.5. In fact, the limiting factor of this species is the soil which must be rich in organic matter (humic acids, carbonic acid and tannic acid) and extremely poor and washed out with regard to the other nutritional elements. In fact, it is known that excessive fertilizations in phosphorus, potassium and, above all nitrogen, cause even irreparable damage to the root system which causes leaf necrosis and subsequently death of the plant. Excessive addition of fertilizer with other macro elements such as Mg and Ca also causes problems for the plant. Above all the latter is an element with high phytotoxicity for this plant as it causes iron chlorosis due to the lack of absorption of iron hindered by calcium, and therefore a lack of chlorophyll synthesis.
The consequence of excess calcium is the discoloration of the young leaves which will remain green only around the veins and white in the rest of the fabric. To avoid the death of the plant, iron chelating compounds or iron salts with acid hydrolysis such as ferrous sulphate are used. To maintain the acidity of the soil and ensure excellent vegetation it is advisable to cultivate this plant in acidic sphagnum peat and to water with water free of salts (which are generally basic and chlorine salts) since generally that supplied by aqueducts, of many countries, such as Italy, have too high a salinity and pH. Fertilization must not be too abundant and usually carried out with neutral or acid hydrolysis fertilizers such as iron, aluminum, potassium and ammonium sulphate.
The plant is also easily transplanted, thanks to the small number of large roots and the dense network of fine roots.
The water supply must be regular until the plant is freed; subsequently it will be necessary to intervene with watering only in particularly dry periods, avoiding stagnation of water and the consequent formation of fungi.
It is very resistant even to the coldest temperatures. The first two years will be characterized by a modest production, at the end of which we will proceed with the thinning of the weakest vegetations and, on the remaining ones, with the return cuts up to the more vigorous side branches. There are few parasites from which it can be attacked, including the oziorinco and gray mold.
There are also many varieties including: Precoce, Duke, Patriot, Reka, Spartan, Mid season, Blue Crop, Raggio blu, KaBluey, Nordland, Tardiva, Aurora, Darrow, Elliott, Maglia, Chandler, etc.

Customs and Traditions –
From archaeological finds and reconstructions it is believed that the cultivation of many wild species of Vaccinium has been carried out by Native Americans for thousands of years.
Most likely the V. corymbosum species, being one of the species probably used by these peoples, was subsequently studied and domesticated in 1908 by Elizabeth Coleman White and Frederick Vernon Coville.
The berries were harvested and used in Native American cooking in areas where Vaccinium corymbosum grew as a native plant.
Currently this Vaccinium is the most common commercially grown blueberry in North America.
However it is also grown as an ornamental plant for home and wildlife gardens and natural landscaping projects.
The production of this plant, on a large scale, is mainly concentrated in North America, but significant crops are also found in Canada.
Other crops are found in Europe, (Germany, Sweden and the Netherlands and others), while in the southern hemisphere, we find them in countries such as Chile, Colombia, Argentina, Peru, Uruguay, New Zealand, Australia, South Africa and Zimbabwe.
The plant was introduced in Australia in 1950. Although initially unsuccessful, production took off in the 1970s.
In addition to this crop, some blueberries, called southern altobush, are hybridized forms derived from crosses between V. corymbosum and V. darrowii, native to the southeastern United States. These hybrids and other cultivars of V. darrowii were developed for cultivation in the warm southern and western regions of North America.
The fruits of Vaccinium corymbosum have a sweet-sour taste and can be eaten fresh, or used for jams, cakes and desserts.
Vaccinium Corymbosum shares most of the properties with other blueberry species. It is, in fact, rich in Vitamin A, C, B, catechitin tannins, pectins, flavonoids, mineral salts, sugars. After pomegranate and Goji berries, it is one of the fruits with the highest content of anthocyanins, antioxidants par excellence, useful for countering the formation of free radicals and with high capillarotropic properties. It is, in fact, a valuable ally against circulatory system disorders, such as swollen legs, cramps, varicose veins and hemorrhoids, as it improves the resistance and functionality of the capillaries.
Its benefits on sight are also known, thanks to the regeneration of the retinal purpura of the eyes, the pigment that allows us to see in low light conditions.
Blueberry also has diuretic, antiseptic and anti-inflammatory properties, useful for treating diarrhea, colic, cystitis and intestinal problems.
Remember, however, that excessive consumption can cause laxative effects; it is not recommended in the presence of kidney stones and can interfere with anticoagulant, antiplatelet and antidiabetic drugs.
from the ecological point of view it is a plant, whose berries, in natural habitats, are a source of food for birds, bears and small native and migratory mammals. The foliage is grazed by deer and rabbits.

Preparation Method –
The northern highbush blueberry, like other blueberries, is grimly used in the food field but also in the medicinal one due to its phytochemical properties.
In the herbal field, extracts, decoctions, mother tinctures, juices and macerates are prepared.
In the food sector, its fruits must be consumed, both fresh and preserved or prepared in jams, juices, ice creams, sweets, etc.