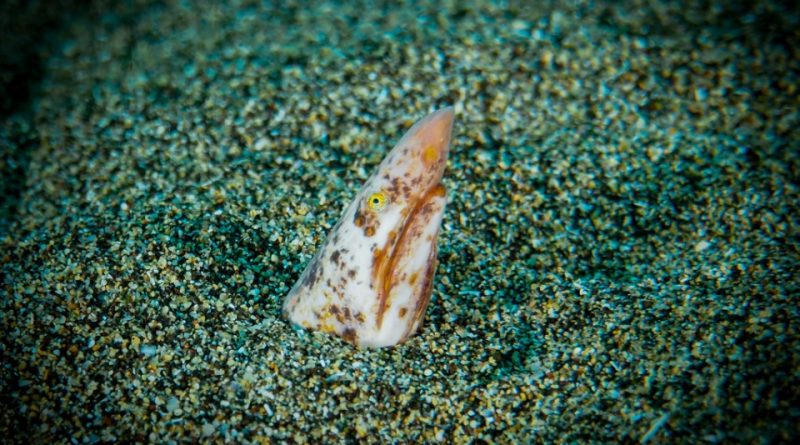 Geographic Distribution and Habitat –
Apterichtus anguiformis is an eel-shaped fish native to the eastern Atlantic Ocean, including the western Mediterranean Sea, Morocco and Cape Verde.
Its marine habitat is that of depths between 10 and 50 meters and inhabits the dens formed in the sediments of sand and mud on the continental shelf. 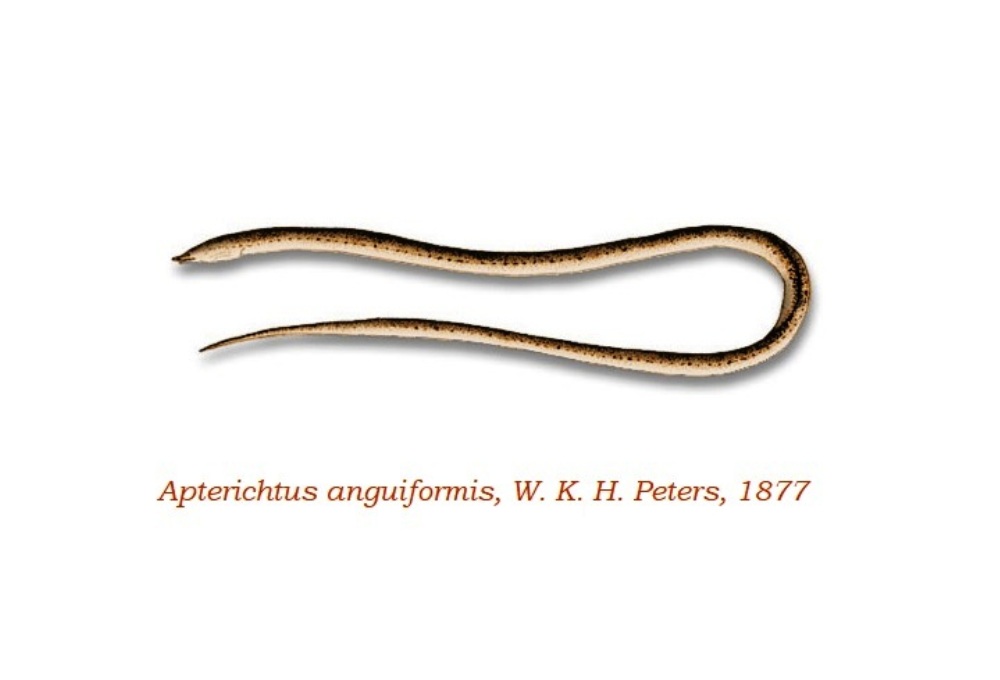 Description –
Apterichtus anguiformis is a fish with a very elongated body, like an eel, with males that can reach a maximum total length of 49.3 centimeters.
The color is reddish tending to brown and ventrally it is whitish. On the upper body, there are often a large number of small darker or black spots.
The fins are completely absent and only the caudal end is hardened.
It has an anal opening slightly forward of half the body.
The muzzle is pointed and the mandibular symphysis is closer to the anterior margin of the eye than to the tip of the muzzle.
The eye is yellow, very small and under the skin. The tips of the jaws are black. The muzzle is pink and the anterior nostril is tubiform in the lower part of the muzzle; the posterior nostril has the shape of an oval slit placed above the upper lip and below the lower edge of the eye.
The teeth, in a single series on both jaws, are conical, acute and slightly curved backwards; 5 teeth of the pre-maxilla form a kind of V; other teeth, arranged in a single band, are located on the ploughshare. The gill openings are latero-ventral. Along the lateral line there are 71-72 preanal pores. Another 5-6 pores are prebranchial and 3 supratemporal. The vertebrae are 150-157.

Biology –
Apterichtus anguiformis is a marine fish of which little is known about its biological cycle and, probably, reproduces from May to June.

Ecological Role –
Apterichtus anguiformis is a fish similar to Apterichtus caecus with which it is confused and which is mistakenly considered a synonym.
This marine species, of subtropical origin, was first described by Wilhelm Peters in 1877.
It lives in the continental shelf, at depths between 10 and 50 m, in burrows in mud or sand.