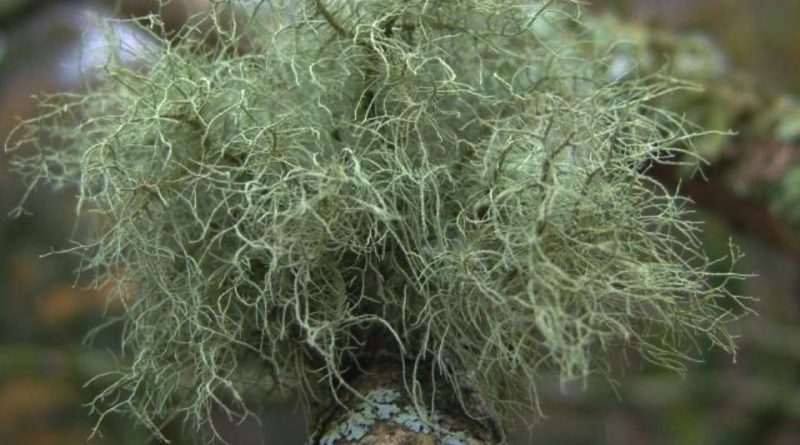 The Beard lichen (Usnea barbata (L.) F.H. Wigg., 1780) is a lichen belonging to the Parmeliaceae family.

Etymology –
The term Usnea comes from the Arabic أُشْنَة, that is ušna, “moss”.
The specific epithet bearded, bearded, comes from beard due to the presence of hair similar to beards.

Geographic Distribution and Habitat –
Usnea barbata is a lichen that grows both in Europe and in North America, often on sick or dying trees due to the pre-existing loss of foliage in the foliage, allowing greater photosynthesis by the algae of the lichen; this leads some gardeners to erroneously attribute the loss and disease of the leaves of the tree to the lichen.
Its habitat is boreal-mountain and present in the oroborean-montane forests with high rainfall and frequent fogs, especially on branches and twigs of Picea.
It is a very sensitive species to atmospheric pollution, in particular to sulfur dioxide. Under unfavorable growing conditions, such as highly polluted areas, they can grow no larger than a few millimeters if they survive. Where the air is not polluted, they can grow up to 10-20 cm in length. Sometimes it can be used as a bioindicator, because it tends to grow only in those regions where the air is clean and of high quality. 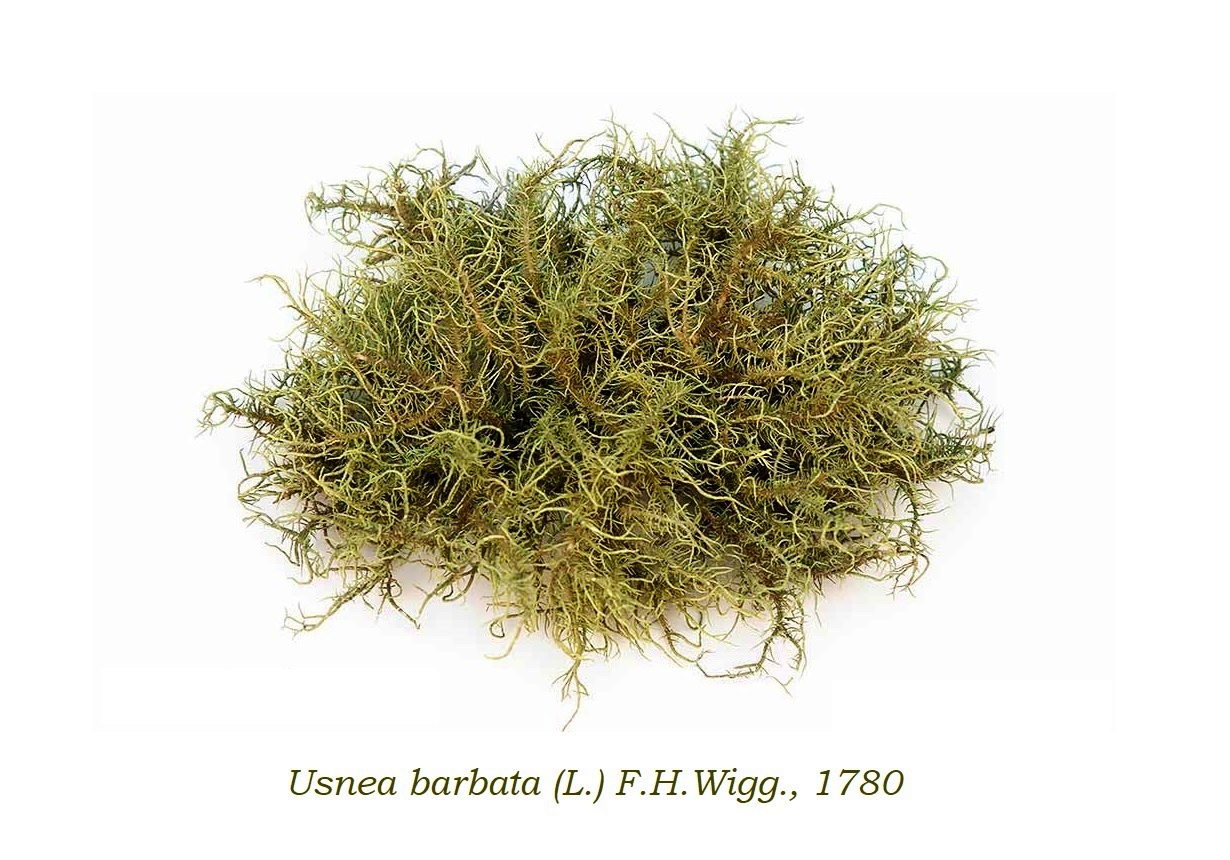 Recognition –
Usnea barbata is a fruticose lichen that grows with a shrubby consistency on host trees. Unlike other similar-looking fruticose lichens, species in this genus have an elastic chord or axis running through the center of the thallus which can be revealed by gently separating a filament from both ends.
The thallus is therefore fruticose-filamentous, greenish, pendulous, 25-40 cm long.
The main branches are isotomic dichotomous, the lateral branches anisotomic dichotomous. The main branches unequal in thickness, angular, often with foveoles, depressions and / or ridges, partly divided into irregular segments by annular fissures, with an ocher to black base, with or without papillae, tubercles and fibrils; lateral branches not restricted at the point of attachment, with or without fibrils. Irregular and punctate soralia, from few to abundant, which develop on the tops of eroded papillae, tubercles or ridges, with or without isidiomorphs.
The bark is opaque, thin; medulla oblongata, thick, white; white central axis. Apothecia not observed in the Italian material.

Cultivation –
The Beard lichen is a lichen that reproduces vegetatively by fragmentation, asexually by means of soredia, or sexually by ascogonium and spermatogonium.
In nature, the growth rate of lichens is slow, but the growth rate has been accelerated under laboratory conditions where Usnea is grown.
It grows on bark and, mainly, sexually.

Customs and Traditions –
Usnea barbata belongs to a species whose taxonomic classification of many members of this genus remains uncertain.
Due to various factors, probably including air pollution, the number of recognized species in Finland is decreasing from 34 in 1951 to 25 in 1963 and only 12 in 2000.
Based on a Usnea fossil found in Baltic amber, the genus is known to date back to at least the late Eocene, about 34 million years ago. The central elastic cord that keeps the lichen branch intact even when its bark is split is an adaptation that has helped allow the genus to thrive in many ecosystems and climates.
The knowledge of lichens, even from a medical point of view, is very ancient.
From the 5th century on, many species of lichen were used in the field of medicine. In fact, the belief was widespread that plants had medicinal properties according to their characteristics and morphological similarities with some human structures. For example, Usnea barbata was applied to treat baldness, since this lichen has a densely branched shape that resembles a thick crown.
It is also used in the cosmetic sector.
It has antibiotic properties and is very bitter. It is used against bronchitis, flu, colds, digestive disorders.
Among its components we remember usnic acid, a component that can also induce toxicity; it is used in supplements for weight loss, anti-dandruff and more.
Used in the treatment of cancer, it currently has no authoritative medical evidence to confirm its efficacy.
Usnea barbata aqueous methanolic extract has been used successfully as an antibiotic therapeutic agent against infections caused by Lactococcus garvieae on rainbow trout.
Usnea barbata extract has demonstrated antifungal properties at concentrations of 10mg ml − 1 against Alternaria alternaria, a parasitic ascomycete fungus that attacks the leaves and damages the crops of about 350 plant species and which can induce allergies in humans.

Preparation Method –
Usnea barbata is a lichen that in ancient times was used as it is, or made in powder or as an aqueous extract. Currently it is mostly used in medicine and cosmetics in various formulations, such as granules, ointments, etc.