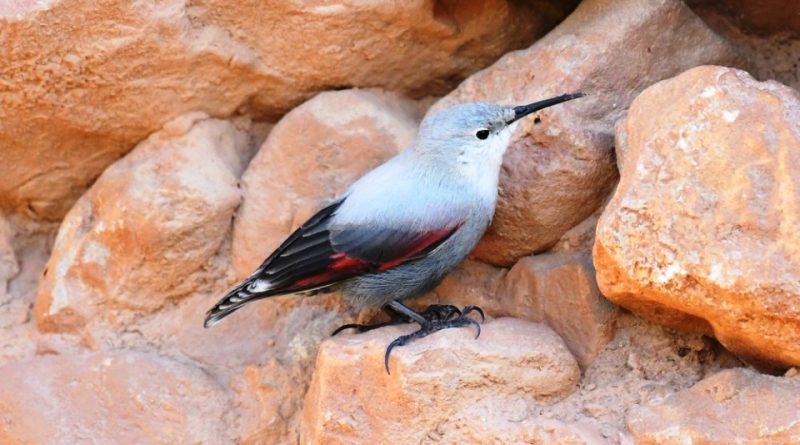 Geographic Distribution and Habitat –
The wallcreeper is a bird found in all the high mountains of southern Eurasia, including the Pyrenees, the Alps, and the Altai.
As regards its habitat, during the spring and summer season it prefers the cliffs facing north, cool and humid, at altitudes between 1300–1400 m and about 3000 m; in winter, on the contrary, the sunny walls at altitudes below 1500 m are selected; artifacts such as castles, towers, churches and dams are regularly visited during wintering and can sometimes be used as breeding sites. 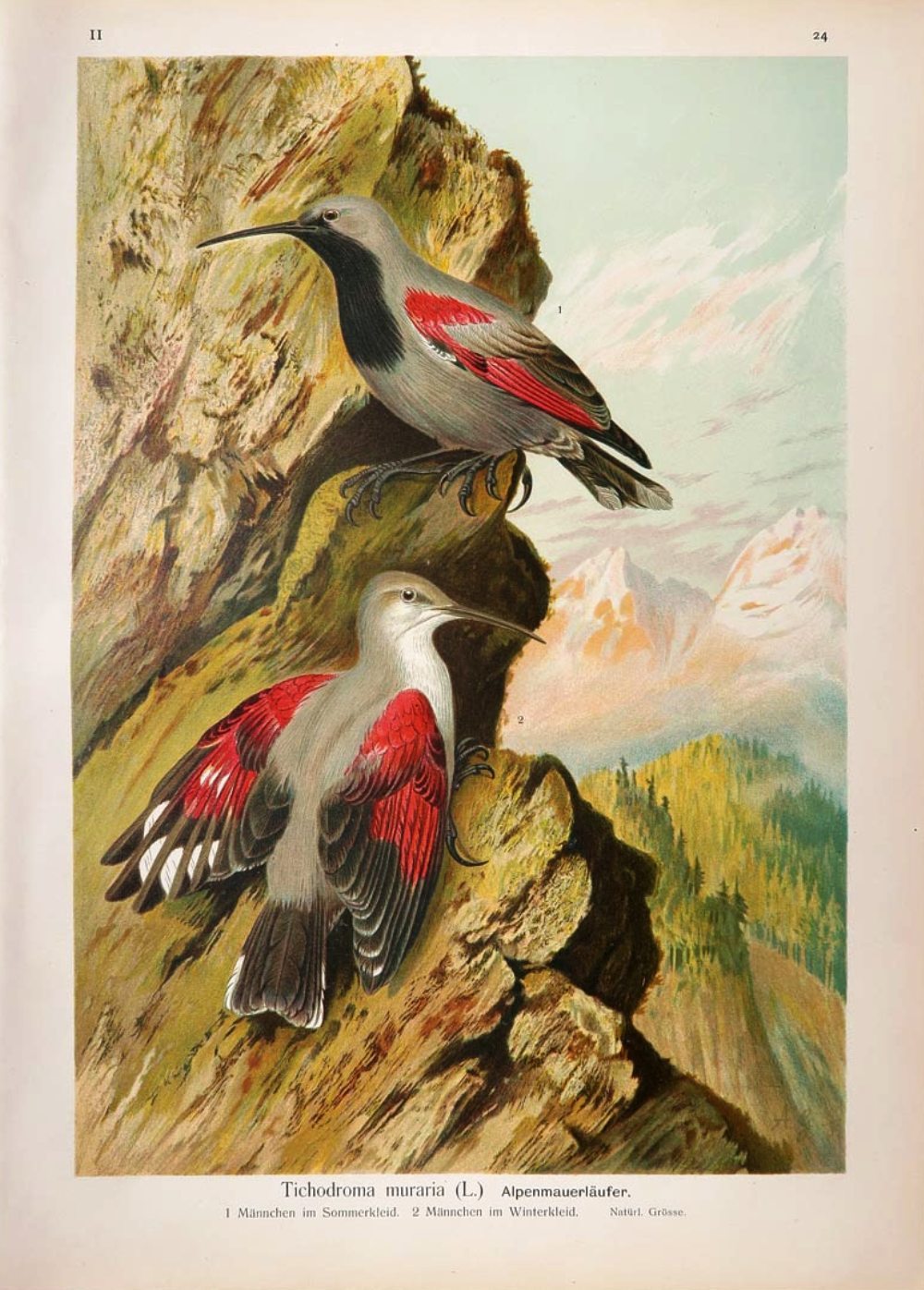 Description –
The Tichodroma muraria is a bird with a length of about 16-17, a wingspan of 26-27 cm, for a weight that is around 20 grams, with the presence of sexual dimorphism, with unmistakable color, gray body, tail black edged in white, black wings with white circular spots and a large carmine red central area.
The body of the adults, in wedding dress, is gray with a black throat; the female is recognizable by having less vivid colors with a less extensive spot on the throat.
The wings are broad and rounded and the tail is short. The beak is long and thin.
The wide and rounded wings, are conspicuously colored in carmine red and black with white circular spots, making it unmistakable, so much so that when it flutters along the rocky walls it recalls the appearance of a large butterfly, so much so that it is also called a butterfly of the rocks.
The song of this bird, which is basically silent, is a high-pitched and prolonged whistle, with notes that alternate uphill and downhill. During the breeding season, the male sings while perched or climbing.
Females generally sing only while defending feeding grounds in winter.
The white eggs measure 21 mm in length and are marked with a small number of black or reddish-brown spots.

Biology –
The Tichodroma muraria frequents, as mentioned, during the spring and summer season cool and humid cliffs exposed to the north, at altitudes between 1300–1400 m and about 3000 m; in winter, on the other hand, it prefers sunny walls at altitudes below 1500 m.
The nest is therefore made in crevasses of overhanging rocky walls, often several tens of meters high.
More unusual is the use of buildings, reported with greater frequency on the transalpine side but also tested in Valle d’Aosta.
The nest is built by the female, cup-shaped, with grass and moss, sheltered deep in a crevice, hole or rock cave. The nest is lined with softer materials, often including feathers or wool, and typically has two entrances.
Here the female lays 3-4 eggs and hatches them for 18-20 days;
During the incubation, she is regularly fed by her partner. The young are blind, featherless and helpless at birth. Both parents feed the chicks for a period of 28-30 days, until the young birds fly off. Each pair rears a single brood per year.

Ecological Role –
Tichodroma muraria is the only species of the genus Tichodroma and is a largely resident bird that moves at lower levels in winter and moves more often across fields when it sometimes uses quarries and buildings.
It is an exclusively insectivorous bird; it feeds on small arthropods between the interstices of the rocks fluttering along the walls. Sometimes it also chases flying insects in short sorties as the feeding birds move across a rock face with short flights and quick jumps, often with partially spread wings.
It is a territorial bird and pairs vigorously defend their breeding territory during the summer. During the winter it is solitary, with males and females in defense of the single feeding territories. The size of these feeding territories is difficult to estimate, but they may include a single large quarry or a rocky massif; or, alternatively, a series of small caves and rock walls. These birds can travel quite a distance to their feeding grounds. They have also been shown to be habitual by showing that they return to the same winter feeding site for consecutive years.