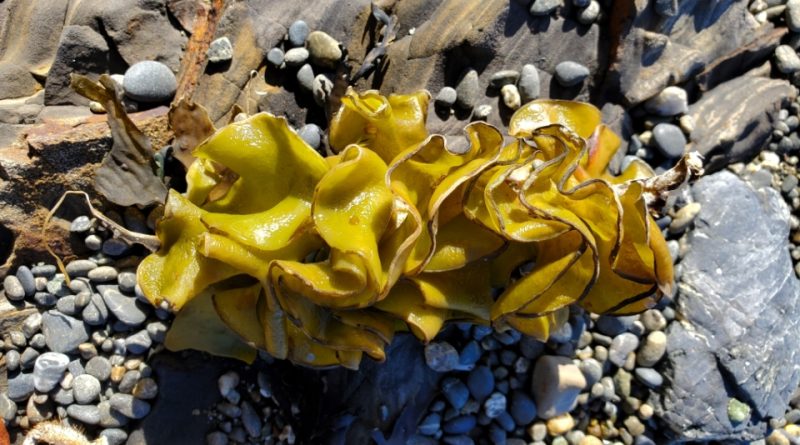 Etymology –
The term Undaria is of uncertain origin.
The specific epithet pinnati fida comes from feather fin and from findo cleave: with leaves divided like a feather.

Geographic Distribution and Habitat –
Undaria pinnatifida is a brown algae native to the seas of the Far East (archipelagos of Japan), with such a wide diffusion that it has been included in the list of 100 of the most harmful invasive species in the world. This species, in fact, has spread as an epiphyte with the traffic of live oysters in the Pacific, North East Atlantic (from Norway to Spain) and in the Mediterranean. It is present in the Mediterranean and the Adriatic where it arrived in the Venice lagoon in 1992, around the city of Chioggia, spreading first in the southern basin and then throughout the lagoon. In many areas during the favorable period it reaches such densities as to appear as continuous belts around banks and shoals characterized by shallow waters.
Its marine habitat where it thrives best is that of areas with rapid currents, so much so that the most tender fronds come from the most turbulent waters; here it grows in deep water from 6 to 12 meters. Here the very long branches reach the surface even on bottoms greater than one and a half meters, sometimes hindering the navigation of small boats and giving the sensation of shallower bottoms than those actually present. This alga massively colonizes solid coherent substrates placed in the middle and lower horizons of the mesolittoral, up to the beginning of the infralittoral plane.
In the summer period it regresses until it disappears completely when the water reaches higher temperatures, but already in the spring period these algae evidently appear at the end of their cycle, and the thalli begin to deteriorate and decompose progressively. 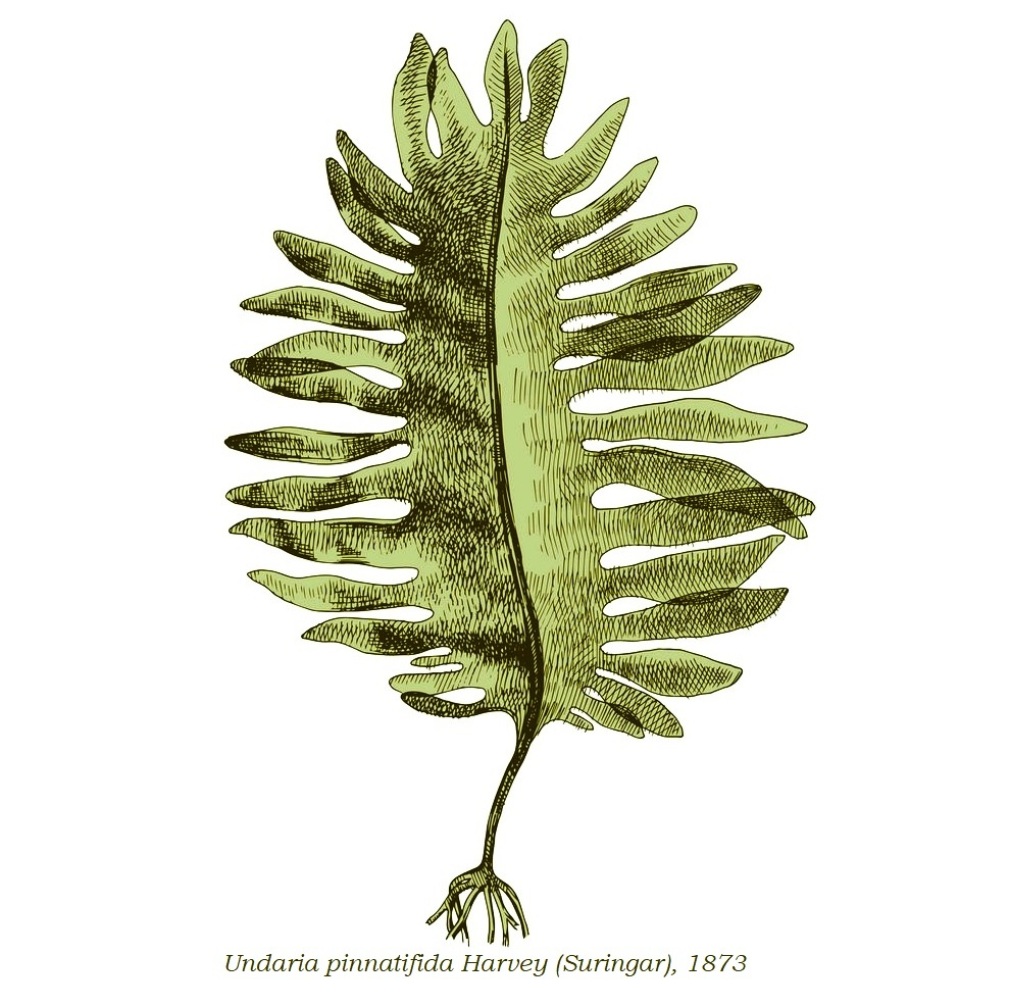 Description –
Undaria pinnati fida is a large leafy brown alga, whose thallus reaches 120-140 cm in length. It is firmly anchored to the substrate with an enlarged, robust and strongly adherent basal portion, which continues in the initial part of the frond formed by a collar folded several times, like an accordion.
The central and distal part of the alga, with a leafy, ribbon-like and flattened appearance, has more or less elongated lateral typing. The thallus is reddish brown, fleshy, and is slimy to the touch due to the presence of a superficial mucus.

Cultivation –
Wakame is an algae which is harvested in spring with a boat and a long rake or hook attached to a rope which, by twisting, detaches the algae from the rock to which they adhere. This alga, in general, thrives in rapid currents, and the most tender fronds come from the most turbulent waters.
The algae brought ashore, are dried and packed or immersed briefly in boiling water and immediately afterwards in cold water, and then put to dry hanging on a rope.

Customs and Traditions –
Undaria pinnatifida, known in China as: 裙带 菜, qúndàicài; like 미역, miyeok, in South Korea and like 若 布, ワ カ メ, wakame, in Japan.
This alga is similar to kombu, with which name indicates edible algae belonging to the Laminaria genus. Since the mid-eighties, encountering economic interest in food and cosmetic uses, the alga has been cultivated along the Breton coasts of Finistère in northern France.
Undaria pinnatifida is an alga that is used both in the food and in the medical and cosmetic fields.
From a nutritional point of view, wakame has many of the beneficial properties of kombu, but it differs from it in an iodine content of about 10 times lower. It is rich in calcium and large amounts of B vitamins and vitamin C, as well as magnesium and iron. It is especially rich in mineral salts, folic acid, trace elements, Vitamins A, E, PP, C, group B, niacin, pantothenic acid, phosphorus, and contains excellent levels of riboflavin.
Proteins have an average content of 16.3 grams per hectogram, the amino acid profile and protein quality indices are also high. This seaweed contains all the essential amino acids which contribute 47.1% to the protein content.
In particular, there is a carotenoid: fucoxanthin which, in addition to stimulating the production of docosahexaenoic acid (DHA), which exerts an antithrombotic action and increases the sensitivity of cells to insulin, promotes the elimination of excess body fat. There are also good amounts of iodine, which contributes to the optimal functioning of the thyroid gland and stimulates the body’s basal metabolism.
Due to its particular composition, this algae is attributed with beneficial healing properties for hair, nails and skin. It promotes the elimination of fats and is excellent for high blood pressure problems, for heart problems, it is detoxifying for the liver and helps the body to purify itself of radioactive waste and heavy metals. Alginates, colloidal fibers of which it is rich, protect and soothe the gastric mucous membranes and can be used in cases of gastric acidity and gastroesophageal reflux.
Some studies have shown that fucans have pharmacological properties. In particular, the sulfur polysaccharides present in the seaweed are considered anticoagulant agents, similar to heparin, and also have antibiotic properties.
The role of alginic acid present in this alga is also important, which is a polysaccharide and a polymer composed of two distinct units: D-mannuronic acid and L-galuronic acid. Due to its structure it is very similar to pectin. In contact with water it forms a gel, the viscosity of which depends on the concentration of phicocolloids, the pH and the presence of electrolytes. In an acidic environment, such as the stomach, sodium alginate forms a thick colloidal gel that works by forming a gastric lining. It also has practically no calorie value. Since digestive enzymes are unable to break it down, alginic acid is considered a fiber that promotes intestinal transit.
Finally, folic acid (Vitamin B9), present in good quantities in wakame, is part of the constitution of a coenzyme mainly concerned with the formation of nucleic acids and the metabolism of amino acids. It is very important for the proper development and maintenance of nervous tissue. In synergy with vitamin B5 and PABA it can delay hair graying.
Wakame seaweed is useful for those who practice sports to counteract acidosis, induced by effort / exercise, and provides the body with basic substances: Calcium, Potassium, Sodium, Magnesium, these mineral salts that help ensure a high capacity performance and to accelerate psycho-physical recovery.
Furthermore, it has no contraindications, it does not contain doping substances and represents, in all respects, a food.

Preparation Method –
Undaria pinnati fida is an alga that is used both in the medicinal, cosmetic and food fields. Due to its nutritional properties it is used as a supplement even if, in effect, it should be considered a real food and not a supplement in the traditional sense.
In the food sector it was first used in the Far East and then spread to various parts of the world.
In Japan, wakame is the third most popular seaweed, after nori and kombu. There are different types and preparations of wakame seaweed. In this country, fresh seared seaweed is sold in the markets with freshly picked vegetables from the land. The one destined for export is usually dried.
Blanching has two main purposes: to give the wakame a green color and to inhibit the growth of fermenting microorganisms, allowing the plant to be sold as a fresh vegetable for longer.
In the West for its light taste it is one of the most popular for those not familiar with the taste of algae. If taken dry it is similar to kombu, but after soaking they differ considerably: kombu looks like a large brown stripe, wakame opens to green leaf attached to a dividing rib; it is from the thickness of the latter that the type of wakame can be distinguished: from leaf (of superior quality) or from stem (of inferior quality).
The term Mekabu identifies the reproductive part of the wakame located at the base of the plant. It is very rich in minerals; its strong salty flavor and sticky texture is ideal for root vegetable stews. When cooked in liquid or deep fried, mekabu opens into a flower shape. It is also found already chopped and can be used in cooking like kombu; it is useful for internal bleeding problems.
For the preparation of delicate dishes the ribs must be removed and cut after soaking. For its delicate taste it combines well with ground vegetables and is good sauteed with onions or cooked and served with boiled green vegetables, or simply soaked and served with cucumber, citrus fruit or vinegar-based sauces. Refreshing, it is excellent as a summer salad. If it is lightly toasted in the oven and then pulverized it is a tasty condiment rich in minerals suitable for brown rice and cereal dishes. It is also a valuable ingredient for soups and miso soups; it has the property of softening the fibers of the food with which it is cooked.
The term Ita-wakame refers to the tender branches of a selected wakame, cut and dried into sheets, such as nori; it is used whole toasted to cover rice balls or toasted and crumbled as a condiment.