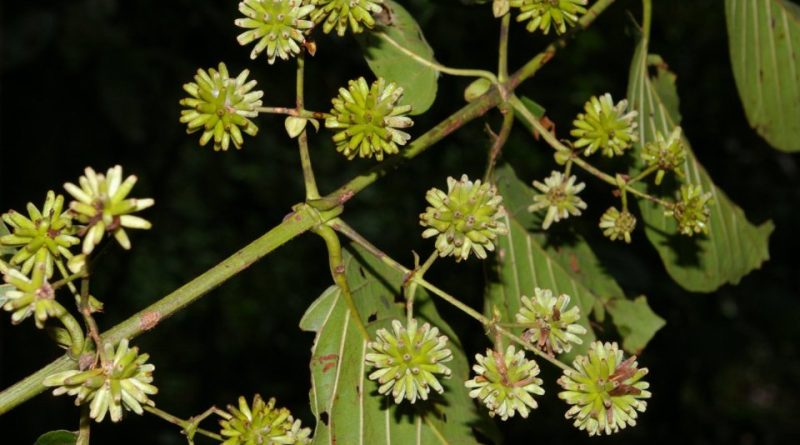 Etymology –
The term Uncaria comes from uncus hook, with reference to the hooked spines of the petioles.
The specific epithet tomentosa comes from toméntum peluria: covered with hair.

Geographic Distribution and Habitat –
Uncaria tomentosa is a woody climbing plant found in the tropical jungles of South and Central America.
It is present in Brazil, Bolivia, Peru, Ecuador, Colombia, Venezuela, Guyane; Caribbean – Trinidad and Central America, from Panama to Guatemala.
Its habitat is that of the primary forest, but also present in the disturbed forest and rarely in the secondary forest, where it is usually found at altitudes up to 300 meters. 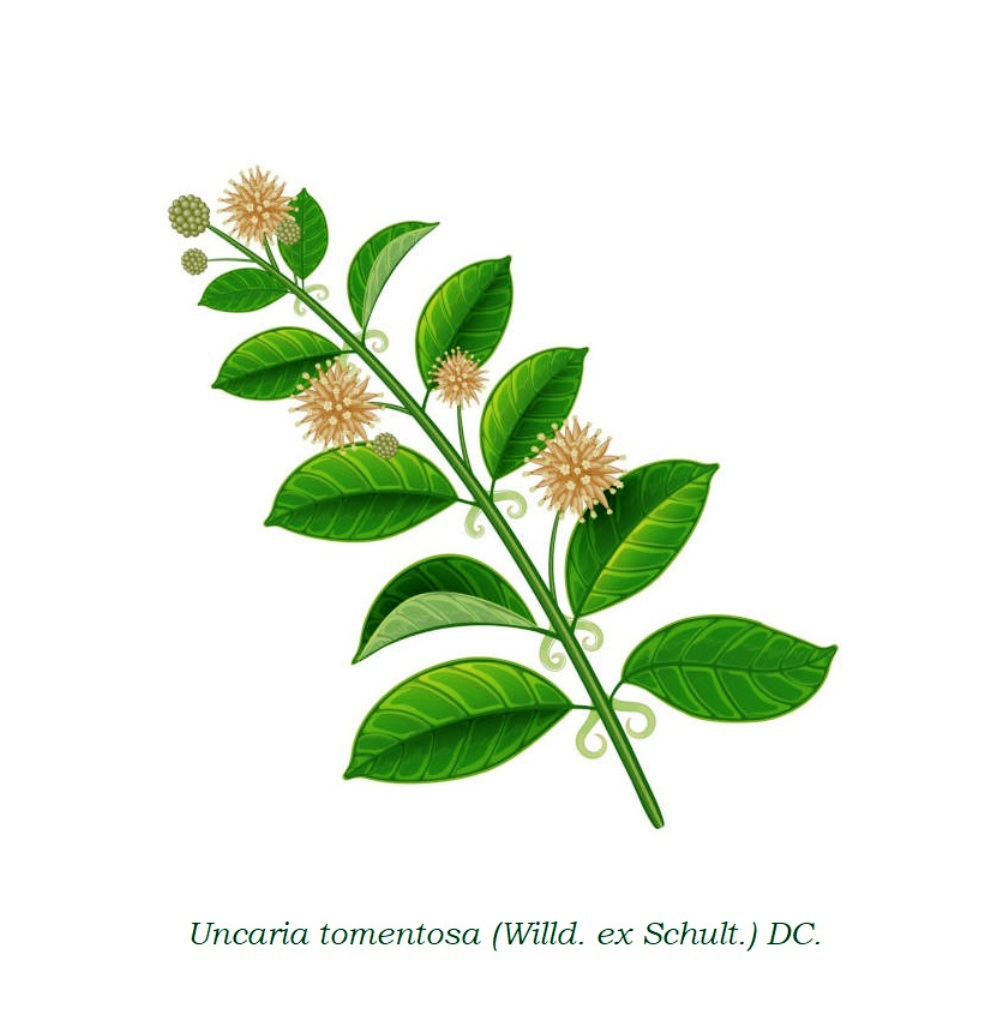 Description –
Uncaria tomentosa is a woody climbing liana that can reach a maximum length of 30 m, climbing by means of thorns.
The leaves are elliptical with a smooth edge and grow in opposite pairs.
The inflorescences are compact flower heads at the end of very small horizontal branches. The lobes of the corolla are without appendages.
The seeds have a long wing at each end, the lower wing deeply bifid.

Cultivation –
Uncaria tomentosa is a spontaneous plant from the tropics, where it usually grows up to 300 meters above sea level. and grows in areas with partial shade.
According to some reports, in some parts of the Atlantic coast of Central America the plant becomes a pest for banana plantations.
The stems are large enough that they can only be harvested when they are 8 years old or older. Generally it is recommended to cut this plant 20 – 100 cm above the ground to allow it to regenerate.
Propagation occurs by seed which has a very short vitality and must be sown as soon as it is ripe.
Propagation by cuttings is also possible, with portions about 20 cm long. If the forest soil is moist enough, the cuttings reproduce easily by inserting them directly into the forest floor. If the conditions are right, the roots develop soon after the transplant.

Customs and Traditions –
Uncaria tomentosa is a climbing plant used in folk medicine. The root bark of the plant is used in herbal medicine for a variety of ailments and is sold as a dietary supplement.
The phytochemicals present in the bark of the Uncaria tomentosa root are: oxindole and indole alkaloids, glycosides, organic acids, proanthocyanidins, sterols and triterpenes, glycosides, tannins, polyphenols, catechins and beta-sitosterol. It also contains rhinophylline.
In food use, the stems are used which are the source of a sap that is used to quench thirst and as a refreshing drink. It has a watery and astringent taste.
In the medical field it has a long history of traditional use, being used in the treatment of a number of conditions including inflammation (especially rheumatism), arthritis, urinary tract infections and gastric ulcers. It has also been used as a blood purifier, to cleanse the kidneys, to recover from childbirth or to treat menstrual irregularities, as a treatment for asthma.
Applied externally, it is used as a cleanser for wounds in order to promote healing, to cleanse the skin of impurities, etc.
The plant is still widely used in modern herbal medicine, where it is mainly appreciated for its stimulating effect on the immune system.
The most commonly used part is the stem bark.
Uncaria tomentosa has many modern applications, which is a common herbal trait with immunostimulating activity and includes: disease prevention, cancer, healing from the side effects of chemotherapy, recovery from childbirth, urinary tract infections, wounds, fevers, bleeding and weakness. Applications that have had some clinical research include viral infections, pain and symptoms of Herpes infections, and inflammatory conditions, such as rheumatoid arthritis.
The plant is in fact anti-inflammatory, stimulant of the immune system, cytoprotective and antioxidant.
Research on the effects of this plant is still under discussion.
A study published in Nature in 2019 found that specific phytochemicals present in the plant (proanthocyanidins) had an inhibitory effect on the formation of both amyloid-beta plaques and tau protein “tangles”. The accumulation of beta-amyloid plaques and tangles of tau proteins has been hypothesized as a major cause of Alzheimer’s disease. This discovery led the authors to conclude: “The discovery of a natural plant extract from the Amazon rainforest plant (Uncaria tomentosa) as a potent ‘plaque and tangle’ inhibitor and disaggregator is postulated to represent a potential breakthrough for both natural treatment. of normal brain aging and Alzheimer’s disease “.
Other studies have found significant improvement in cognitive function following administration of cat’s claw extract, albeit exclusively in rats. A 2021 study published in Chinese Medicine found that rats with streptozotocin-induced Alzheimer’s disease showed better memory function after receiving a large, highly concentrated dose of cat’s claw extract. Again, the authors concluded that their findings “broadly imply that both UTE and URE are worthy of clinical development in the pharmaceutical treatment of AD.”
However, some criticisms have suggested that such enthusiasm is not justified since the plaque and tangle inhibition (and cognitive improvements) seen in such studies took place in vitro or in rodents. The effects were also achieved using very high concentrations of cat’s claw extract that would not have been practical in a clinical setting with human subjects. As of 2022, no Alzheimer’s patient has had a significantly reversed disease or its progression interrupted by administration of cat’s claw, in its whole or purified extract form. While more research is needed, claims that cat’s claw extract represents a likely cure for Alzheimer’s are, at best, grossly exaggerated.
It should also be remembered that some people allergic to plants of the Rubiaceae family and different species of Uncaria may be more likely to have adverse reactions to the cat’s claw. Reactions may manifest as itching, rash and allergic inflammation of the kidneys. People who require anticoagulation therapy should not use this plant.
Additionally, the phytochemicals in cat’s claw can inhibit the liver enzyme, CYP3A4, which oxidizes organic compounds and can interfere with the intended effect of drug prescribing.

Preparation Method –
Uncaria tomentosa is a plant that boasts an ancient and widespread use both in the traditional medicine of peoples where it grows spontaneously and for food use.
In food use, the stems are used from which a sap flows which is used to quench thirst and as a refreshing drink.
The part used medicinally of this plant is the bark of the vine or root.
The whole plant is used in gargling to treat mouth ulcers.