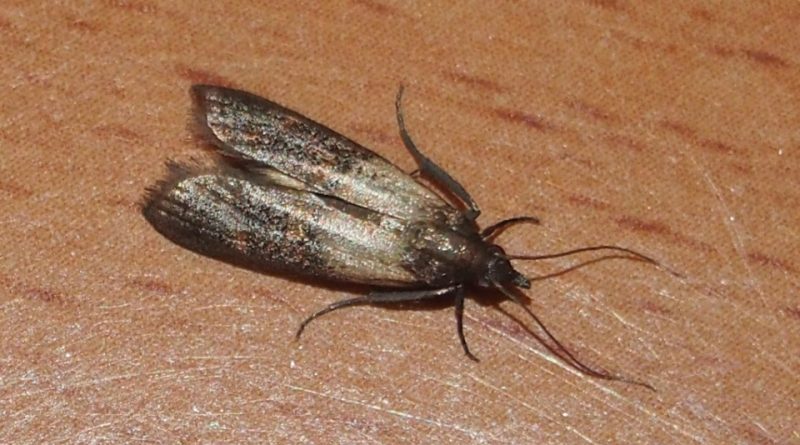 The Indianmeal moth (Plodia interpunctella Hübner, 1813) is an insect belonging to the Pyralidae family.

Geographic Distribution and Habitat –
Plodia interpunctella is a moth that lives on all continents with temperate to tropical climates, excluding Antarctica. In fact, this butterfly develops in a wide range of conditions, where it often becomes a persistent parasite. It is often found in food storage facilities around the world, particularly in grain containers or grain storage buildings. It infests cereal flours, pasta, dried fruit, organic animal preservatives, cereal kernels, etc.

Morphology –
The Plodia interpunctella is a butterfly that can reach up to 20 mm of wingspan, with wings always briefly fringed.
The front wings have, at the base, a cream-colored band and in the distal part a brown-orange band, separated by a dark stripe.
The hind wings are whitish in color.
The larva has a length of 13-15 mm, is yellowish, with the head, the first thoracic segment and the abdominal extremities of brown color; the larvae have short legs and pseudo-legs and hair tubercles.

Attitude and Life Cycle –
Plodia interpunctella is a butterfly which winters, generally, in the larva stage, protected in shelters among foodstuffs or near them; it pupates in cocoons mixed with flour and other food residues.
Females can lay up to 300 eggs which are smaller than 0.5mm.
Depending on the climatic conditions and microclimates where it reproduces, it can take 2 to 4 generations per year.
The damage is caused by the larvae that feed on preservative materials, covering them with silky filaments and smearing them with excrement and exuviae.
The products therefore become unmarketable and, at times, can also undergo fermentation; furthermore, the germination of the kernels and seeds is compromised.

Ecological Role –
The Indianmeal moth is a moth which, above all, in domestic environments proliferates very easily due to the presence of flour and pasta. Generally during the day these insects are static on curtains or walls. They are attracted to surfaces with homogeneous colors. One of the best known methods for elimination is the use of pheromone adhesive papers, which attract only males, in order to block reproduction. The larvae of the moth insinuate themselves in the cracks in the walls and in the cavities of the furniture.
In nature, the eggs of Plodia interpunctella are parasitized by some Ichneumonid Hymenoptera such as Venturia Canescens, which inserts its own eggs inside the host’s eggs, reducing the number of adult flickers.
However, these alone often fail to keep this butterfly at bay.
To do this, fighting and containment techniques are necessary.
In the fight, sexual traps can be used to monitor the population and in order to establish, based on the extent of the infestation and the time of the flickers, any disinfestation treatment.
These traps must be installed in warehouses at any time of the year as long as there is an ambient temperature above 15 ° C. Mass traps can also be of some use to reduce the population present.
Prevention is also important. This technique must be operated following some basic rules:
– the premises intended for storage must be perfectly impenetrable by insects. For this reason, doors and windows must be able to close hermetically. The buildings must also be isolated in the foundations, to allow any disinfestation fumigations, even under pressure; the windows must be equipped with metal or nylon nets, with a fine mesh, to prevent the entry of adult insects;
– food traps, light traps with electric discharge, hce sex traps are particularly effective against Lepidoptera in warehouses and processing rooms. With these traps different results can be obtained, namely: either the massive capture or the monitoring. The intervention threshold varies from 1 to 2 insects per trap depending on the pest considered;
– the disinfestation is carried out with fumigants or with residual action insecticides; it can be done both with infestations in progress and with empty rooms, for preventive purposes.
Please note that fumigations must be carried out by specialized personnel, subject to the authorization of the Police Headquarters, the A.S.L., or the Harbor Master’s Office.
The doses and periods of exposure must be strictly respected to prevent the stored product from taking on odors which are then also transmitted to bread and other derivatives.
Contact insecticides can also be used. In this case, the application of the doses must be rigorous to avoid the onset of resistance phenomena, it is also advisable to alternate the use of the active ingredients, to reduce these phenomena.
In recent times, however, we are moving towards innovative techniques such as:
– controlled atmosphere and refrigeration; these new techniques, which tend to replace chemical products, make it possible to limit infestations and to obtain preserved products without chemical residues.
Obviously these techniques involve specially constructed and naturally watertight environments. Furthermore, the controlled atmosphere technique is carried out with the use of nitrogen or carbon dioxide in place of oxygen.
The best results are obtained with carbon dioxide which requires shorter application times, compared to nitrogen, even in the presence of a certain% of oxygen.
Insects die from suffocation and from the toxic effect of CO2 at the cellular level.
The refrigeration technique allows the products to be stored effectively for long periods as the metabolism of insects is blocked.
Refrigeration times vary depending on the chosen temperature drop, which depends on the species of insects present and their stage of development.
Conservation could also be integrated, ie using both techniques: low temperatures associated with a controlled atmosphere.