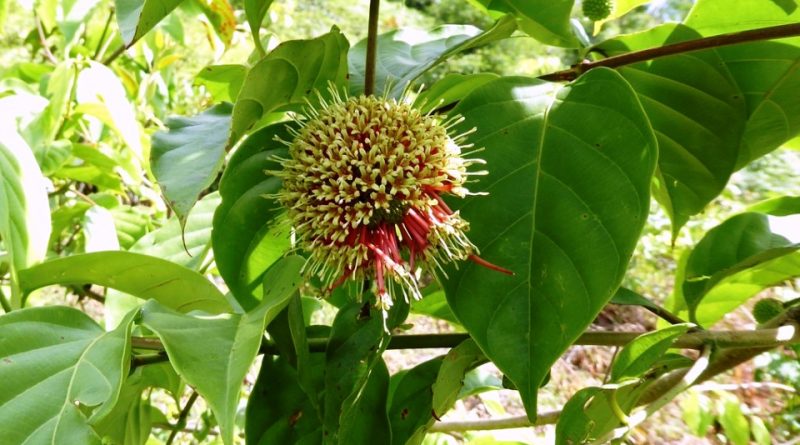 The gambier or gambir (Uncaria gambir (W. Hunter) Roxb., 1824) is a shrub species belonging to the Rubiaceae family.

Etymology –
The term Uncaria comes from uncus hook, with reference to the hooked spines of the petioles.
The specific epithet gambir is the vernacular name of the plant in Malay.

Geographic Distribution and Habitat –
Uncaria gambir is a plant native to Southeast Asia, where it grows mainly in Malaysia and Indonesia but is also present in China and India.
Its habitat is that of the Malaysian rainforest on rich substrates and in partially shaded forest areas but which grows well in full sun. 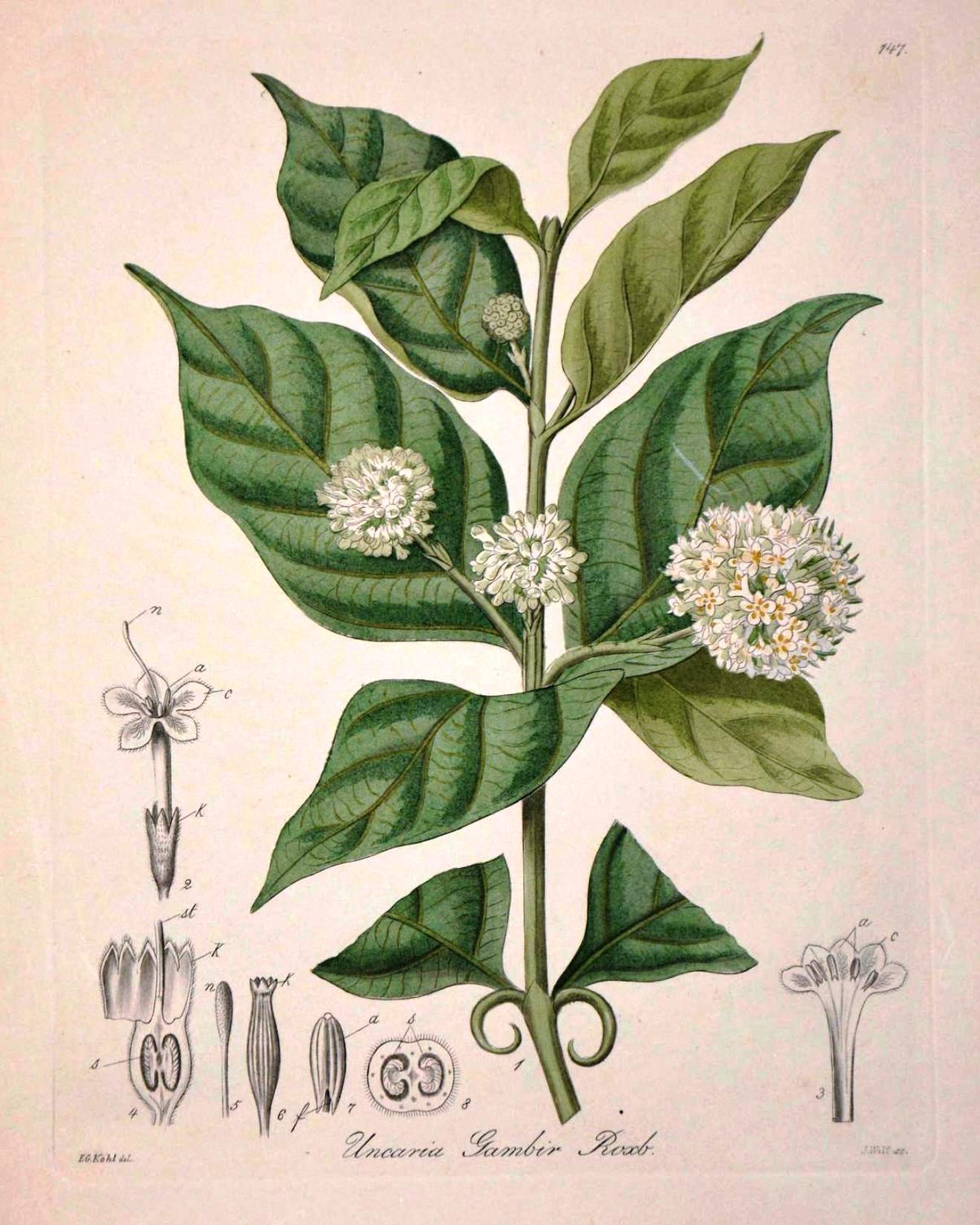 Description –
Uncaria gambir is a shrub that grows in the form of a liana and that climbs onto other plants by means of hooks made up of reduced and modified branches. It has whole or bifid stipules.
The leaves are opposite, lanceolate ovoid in shape, with a pointed terminal part and a bright green color and evident veins.
The inflorescences are compact flower heads at the end of very small horizontal branches. The lobes of the corolla are without appendages.
The seeds have a long wing at each end, the lower wing is deeply bifid.

Cultivation –
Uncaria gambir is a wild plant that grows mainly in China, India, Malaysia and Indonesia.
For its cultivation it should be taken into account that it grows in areas with a tropical or subtropical climate.
It grows both in shady areas and in full sun and needs moist but well-drained soils.
In some areas of the Asian continent, between the 10th parallel north and south, it is also cultivated in symbiosis with pepper plantations.
Reproduction occurs both by seed and by agamic way by portions of the stem or by cutting.

Customs and Traditions –
Gambir is a plant that has long been used for medicinal applications.
The Indians invented paan, a gambir paste, which was believed to help prevent miasma; it was considered as the first anti-asthma application.
In Sumatera, the plant was used as a traditional treatment for fever, diarrhea, diabetics and wound healing.
Gambir extract is used or has been used as a catechu for chewing with areca and betel, for tanning and dyeing and as a herbal medicine.
Gambir extract mainly contains catechetical tannins and other compounds in lower percentages such as sugars, salts, waxes, oils, and even mineral substances.
Specific scientific research was carried out to evaluate the curative characteristics of gambir extract.
Gambir extract was found to be effective in reducing the level of TNF alpha and increasing the level of prostaglandin E2 in gastritis on laboratory rats.
Among other applications, it should be remembered that the gambier extract used alone in the tannery produces a rather soft leather, with a fine touch and a reddish brown color. This extract is recommended for the retanning of calves and chrome mezzine. It is also used as a dispersant in dyeing and has given good results in the retanning of chrome leathers intended for glove making because it gives fullness without altering the characteristics of softness and elasticity. A peculiar property of gambier extract is to give the leathers an excellent brightness of the dyes. For the production of some brushed items, the use of gambier in combination with formic acid is recommended.

Preparation Method –
Uncaria gambir is a plant that has been used for some time in the medical and tanning fields.
To prepare the extract, the leaves and twigs of gambir are boiled in water. The resulting decoction is evaporated to the consistency of a syrup and then cooled under stirring to favor crystallization. The mass thus obtained is cut into small cubes of the size of 25 mm.
To overcome the difficulties of solubilization and to make them suitable for tanning and retanning of leathers, the gambir cubes are dissolved with dispersing tannins.