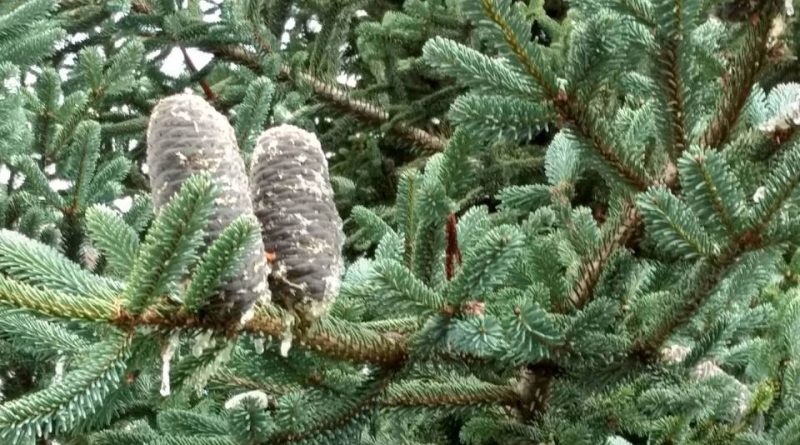 The Vejar’s fir (Abies vejarii Martínez) is an arboreal species belonging to the Pinaceae family.

Etymology –
The term Abies comes from Abies which is the classical Latin name (Virgil, Egloghe, from the Sanskrit root abh gush of resin); according to another interpretation it would derive from the Greek word ἄβιος = long-lived.
The specific epithet vejarii was given in honor of Octavio Vejar Vazquez, Mexico’s education minister at the time of the discovery.

Geographic Distribution and Habitat –
Abies vejarii is a conifer endemic to north-eastern Mexico where it is found in the Eastern Sierra Madre (Coahuila, Nuevo León and Tamaulipas).
Its habitat is that of the high mountains where it grows at altitudes between 2800 and 3300 m (the lower limit of 1800 m) on steep mountain slopes and in cool ravines; the preferred soils are those poor in humus, but humid. The habitat climate is cool with dry summers and wet winters. It is found mainly in mixed forests with Pseudotsuga menziesii var. glauca, Cupressus arizonica, Picea engelmannii mexicana and species of the genera Pinus and Quercus. 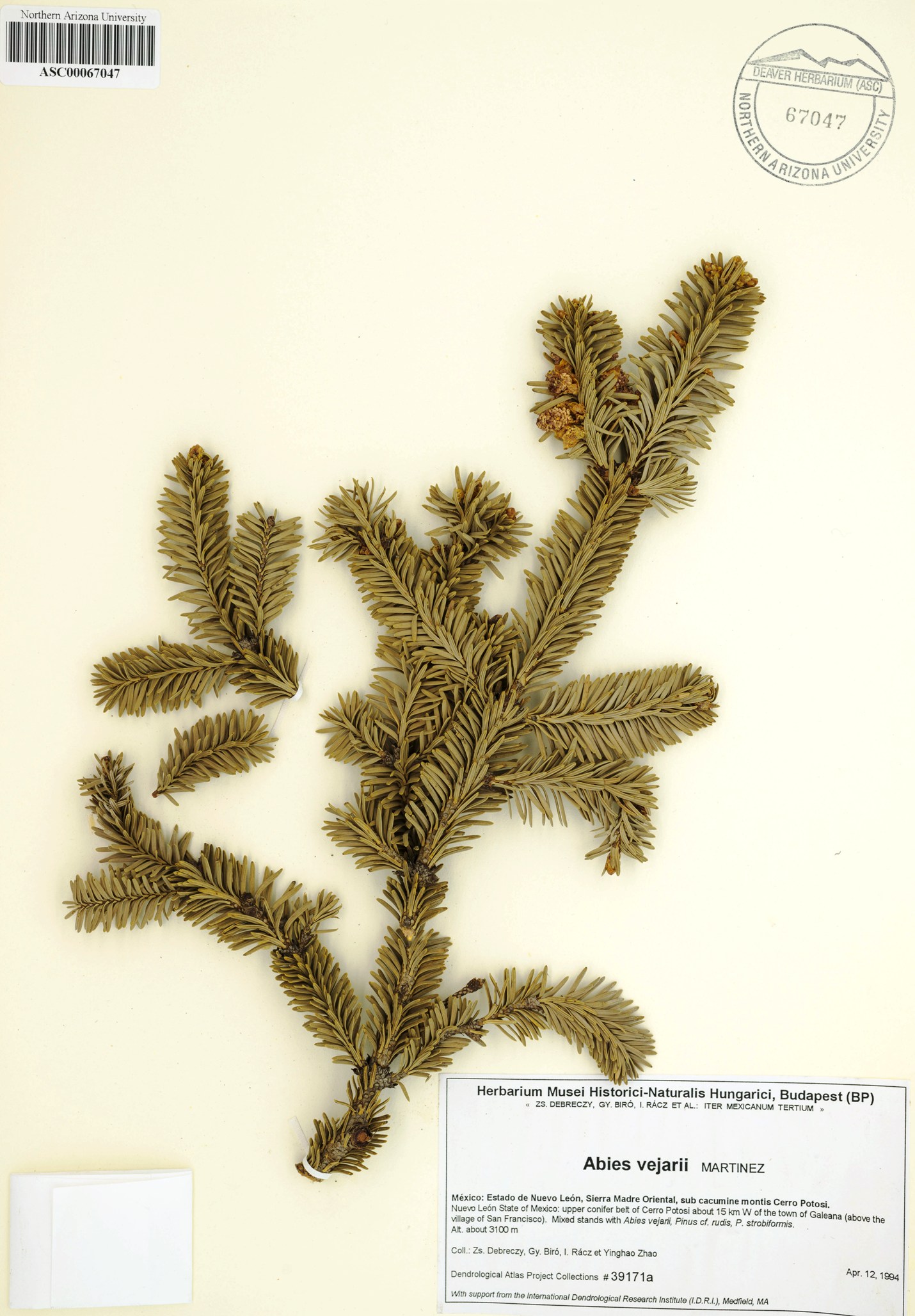 Description –
Abies vejarii is a tree that grows up to 40 m in height, with a trunk that can reach 150 cm in diameter, with a conical or pyramidal bearing. The branches branch out horizontally from the single straight trunk. The shoots are slender, first red-purple and then brown-orange, smooth or hairless.
The bark is initially thin, smooth and gray, but over time peels off, becoming rough and plated, gray-brown in color.
The leaves are needle-like, superficially grooved and arranged in a spiral, up to 10-20 mm long, twisted at the base; they have stomata arranged in two wide whitish bands on the lower face and on 10 lines on the upper face. The buds are spherical, very resinous, with rigid bracts.
Male strobili are 5 mm long, reddish in color and spherical in shape.
The female cones, initially are purple and dark, dark brown when ripe, are erect and oblong-ovoid, 6-12 cm long and 4-6 cm broad, with obtuse or truncated tip; the bracts of the scales, initially erect, then curved in the mature cones, are 25 mm long.
The seeds are about 8-10 mm long, with purple-brown wing part, 15×12 mm.

Cultivation –
Abies vejarii is a fir native to northeastern Mexico where it grows at high altitudes in the Eastern Sierra Madre.
It is an evergreen tree that grows in a restricted and inaccessible range and therefore its wood is of no economic importance.
It is grown only in some botanical gardens.
The species has a limit of resistance to cold between -17.7 ° C and -12.2 ° C.
However, for its reproduction it is important to keep the seeds obtained from the specimens in the wild, useful for the conservation of the species.

Customs and Traditions –
Abies vejarii is a rare conifer, discovered in the last century, and which grows in a restricted area.
This range is also fragmented but large enough not to consider it a vulnerable species; it is therefore classified as a near threatened species on the IUCN Red List. The most dangerous threat is represented by frequent forest fires in growing areas.
The area in which it grows is extremely interesting from the point of view of the diversity of conifers, as other species grow there such as: Abies religiosa, Pinus arizonica, Pinus culminicola, Pinus hartwegii, Pinus nelsonii, Pinus strobiformis, Pseudotsuga menziesii subsp. glauca and Pinus greggii.
This plant, beyond its ecological value, has no particular uses for its timber, due to the inaccessibility of the area or for food or medicinal uses.

Preparation Method –
Abies vejarii is a conifer whose medicinal or food uses are not known, while the use of its timber is economically inconvenient due to the difficulty of accessibility of the area.