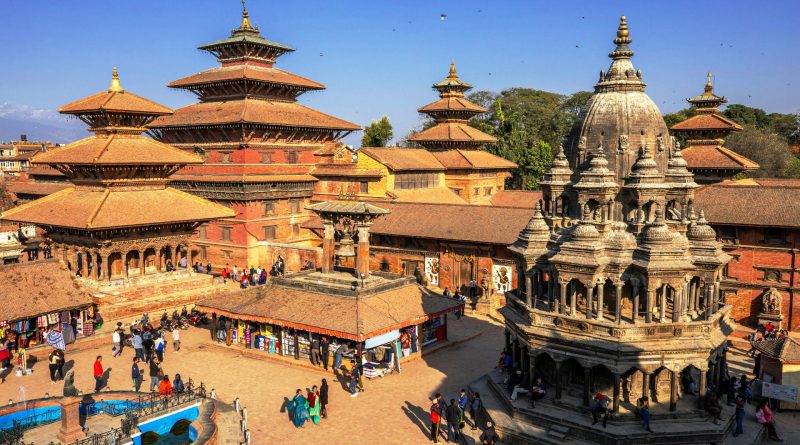 Geography –
Nepal borders China (Tibet) to the north and India to the south and is a landlocked state. The territory of the Himalayan state, between the Ganges plain and the Himalayan mountain range, is mainly mountainous, has a considerable difference in height (from 80 to 8,848 m of Everest, the highest point on Earth) and is geographically part of the Indian subcontinent.
Nepal is positioned between 26 ° and 30 ° north latitude and between 80 ° and 88 ° east longitude. The territory has a vague trapezoidal shape, from east to west it extends for about 850 km and from north to south the extension never exceeds 250 km. The total surface is equal to 147 181 km², of which 143 351 km² are land and 3,830 km² are inland waters. However, Nepalese government sources declare an area of ​​147 561 km² including also the disputed territories of Kalapani, Lipulekh and Limpiyadhura.
The country, as mentioned, is landlocked, bordered to the north with China (Tibet Autonomous Region) and to the south, east and west with India (from east to west with the states of Uttarakhand, Uttar Pradesh, Bihar, West Bengal and Sikkim).

Climate –
Although Nepal is a small to medium-sized state, it has a remarkable variety of climates and natural environments. From a morphological point of view it is divided into three areas also represented in the emblem of the country: the Terai, the southernmost strip of the state which corresponds to the northernmost point of the Indo-Gangetic plain; the Pahad, the central area with mountains up to 3000 m asl; and finally the Himal, the perennial snow zone corresponding to the northern part of the country, which includes the peaks of the Himalayas. This subdivision into these three areas also concerns economic and socio-cultural aspects.
The country is characterized by a subtropical climate, which has mainly two seasonal phases: the rainy season (from June to the end of September) and the dry season (the rest of the year). This alternation is due to the presence of monsoons, the periodic winds characteristic of South and Southeast Asia.
The summer monsoon blows from the Indian ocean towards the continent, loading itself with humidity and bringing rain, while the winter monsoon blows from the arid plateau of Tibet towards the ocean, giving rise to a clear sky and a dry climate.
There may be strong temperature variations between summer and winter but, given the variability of the territory, it is also very easy for a certain area to have a different microclimate from another.
The hottest month is May, at the end of the dry season. The period in which nature is most luxuriant is instead autumn (approximately October and November), when the rains have now stopped and the climate has become mild. 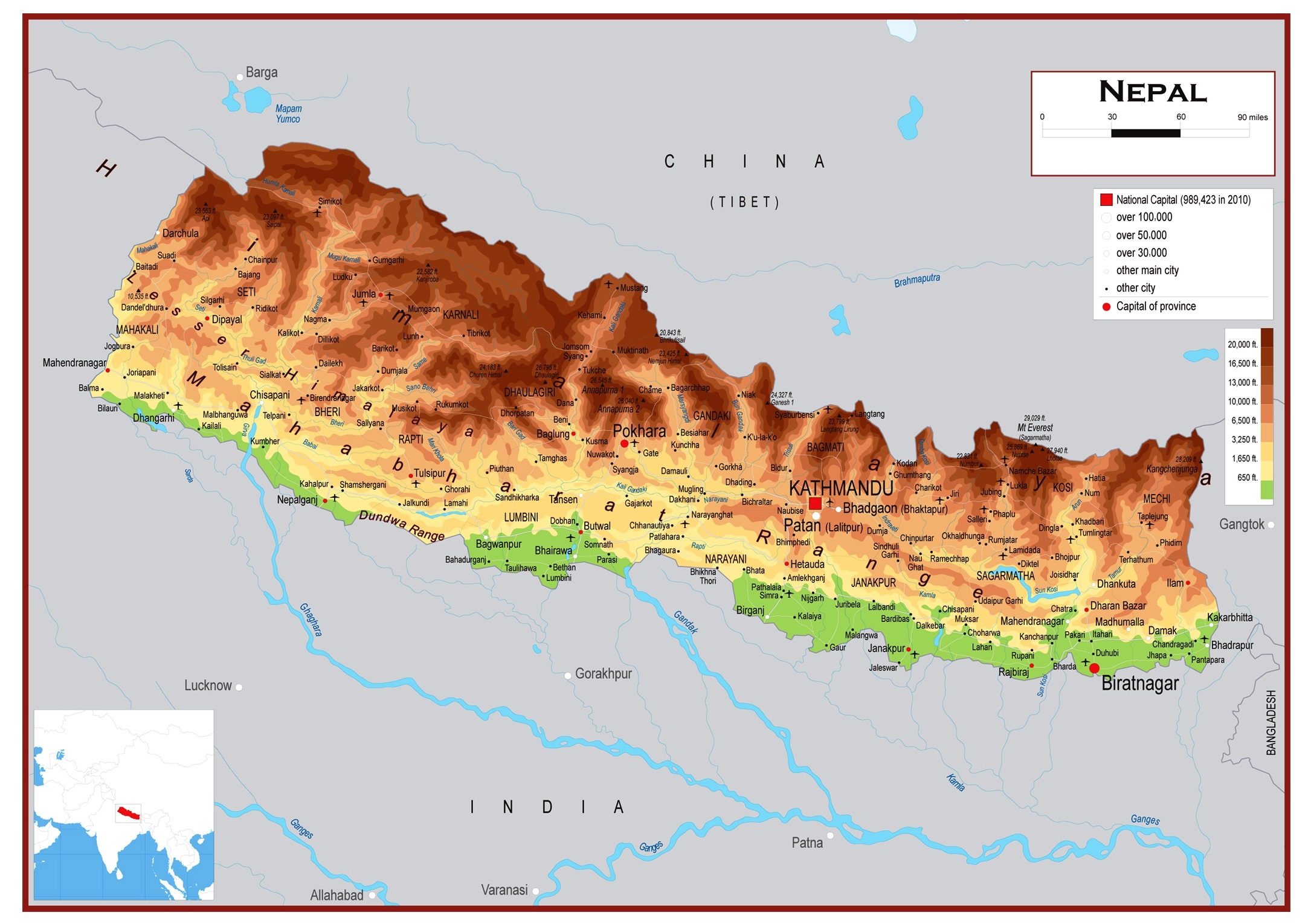 Flora-
The flora of Nepal is one of the richest in the world due to the country’s diverse climate, topology, and geography. Research undertaken in the late 1970s and early 1980s documented 5067 species of which 5041 were angiosperms and the remaining 26 species were gymnosperms. The Terai area has hardwood, bamboo, palm and sal trees. Notable plants include garden angelica, Luculia gratissima, Meconopsis villosa, and Persicaria affinis. However, according to the ICOMOS checklist (as of 2006), in the protected sites there are 2,532 species of vascular plants under 1,034 genera and 199 families. The variation in the figures is attributed to inadequate archived studies of floral cover.
There are 400 species of vascular plants endemic to Nepal. Of these, two in particular are the orchids Pleione coronaria and Oreorchis porphyranthes. The most popular endemic plant of Nepal is the rhododendron (arboreum) which in the Nepali language is called lali guras.
Nepal, to safeguard the variability of flora and fauna biosidversity, has established various protected areas which are listed below:
– Annapurna conservation area;
– Royal National Park of Bardia;
– Royal Chitwan National Park;
– Dhorpatan Game Reserve;
– Kanchenjunga conservation area;
– Khaptad National Park (Baba);
– Koshi Tappu Wildlife Reserve;
– Makalu-Barun National Park and Conservation Area;
– Langtang National Park;
– Manasalu conservation area;
– Kingdom of Mustang Conservation Area;
– Parsa wildlife reserve;
– Rara National Park;
– Suklaphanta Royal Wildlife Reserve;
– Sagarmatha National Park (Everest);
– Shey-Phoksundo National Park.

Fauna –
Just as floristic biodiversity represents a heritage of inestimable value in Nepal, so too the fauna includes countless species, many of which are also endemic.
There are 181 mammal species in Nepal, including 28 species reported to exist outside the limits of protected areas, excluding the four known extinct species. Among the various species of mammals present in Nepal, some of the most notable examples are those constituted by the Bengal fox, the Bengal tiger, the clouded leopard, the Corsac-type fox, the Indian rhinoceros, the Indian elephant, the cat. marbled, the red panda, the snow leopard, the Tibetan fox and the Tibetan wolf. Some of these, including the snow leopard, are internationally recognized as endangered and therefore at constant risk of extinction.
As for reptiles, there are several species native to the region, ranging from crotalinae to monitor lizards. Some of the most prominent examples include Varanus bengalensis, Gloydius himalayanus or “dimpled viper”, the elongated tortoise (Indotestudo elongata), the viper Trimeresurus albolabris septentrionalis, and the golden yellow monitor (Varanus flavescens). While the aforementioned species are also found elsewhere in Southeast Asia, there are some reptile species unique to the place, such as Sitana fusca and Cyrtodactylus nepalensis.
Sitana sivalensis, Japalura tricarinata, Annapurna ground skink (Scincella capitanea), Asymblepharus nepalensis scincidae, Cyrtodactylus martinstolli gecko, Shah’s bamboo viper (Trimeresurus karanshahi) and Tibetan viper (Gloydius straili). find in Nepal.
As far as birdlife is concerned, there are about 27 important types of birds in the country area [6] and over 900 bird species in total (as estimated in 2012) known to be present in Nepal, of which 30 species are globally threatened. , one species is endemic and another has been introduced there.
The “Danphe” or Himalayan hornbore represents the national bird. In addition, there are eight species of stork, another five of pheasants, six “Minivet” passerines [8] of the genus Pericrocotus, seventeen different species of cuckoo, thirty of “flycatchers” and sixty of songbirds.
Aquatic fauna is also relevant. The aquatic faunal species reported are: the Pharping catfish (Myersglanis blythii), the Psilorhynchidae nepalensis and the Psilorhynchidae pseudecheneis (“Nepalese minnows” or mountain carp), the Schizothorax macrophthalmus, the Turcinoemacheilus himalaya ascita and the Erethisto ascita cavatura, the catfish of the type Batasio macronotus and the Sisoridae Pseudecheneis eddsi, Pseudecheneis crassicauda and Pseudecheneis serracula).
Among the invertebrates we must mention some of the most important insect species such as: the ground beetle Cychropsis nepalensis, the Carabidae of the type Nebria molendai, the dung beetle Caccobius scheuerni, the beetle Cerambycidae Hesperoclytus katarinae, the moth Heterolocha mariailgeae, the grasshopper Calopsera Mariailgeae the grillotalpa Gryllotalpa pygmaea), grasshoppers (Latifrons nepalocaryanda), the bee Andrena kathmanduensis, the ant Franklinothrips strasseni and the dragonfly Zygoptera Calicnemia nipalica.
Other invertebrates reported are the tarantula Haplocosmia nepalensis, the goblin spider (Oonopidae) Brignolia ankhu, the spider Salticidae omnisuperstes Euophrys, the scorpion Heterometrus nepalensis, the centipede Cryptops nepalensis, the land snail Darwininitium shiwalikensis and the freshwater lumaca nepalensis, and the aquatic snail. Tricula mahadevensis.