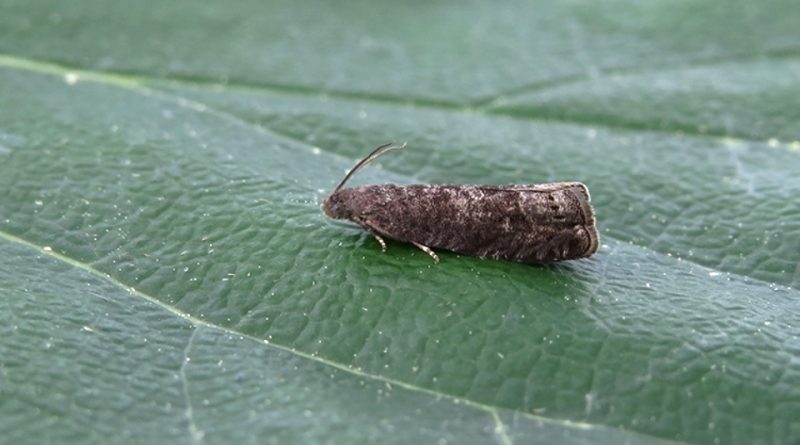 The plum fruit moth (Grapholita funebrana Treitschke, 1835) is an insect belonging to the Tortricidae family.

Geographic Distribution and Habitat –
The Grapholita funebrana is a moth from the Palearctic ecozone that affects almost exclusively the plum tree, attacks on other stone fruits, such as peach, apricot and cherry are rare.

Morphology –
The Grapholita funebrana is a medium-sized butterfly, with a wingspan of 12-15 mm.
The front wings are greyish with a basically brownish background and whitish marbling.
The larva, or the plum tree worm, measures about 12-15 mm when fully ripe. The color is carmine red, the head is dark. The pronotum presents, clearly visible, some dark spots. The abdomen has 4 dorsal hair warts on each segment.
The chrysalis is light brown or reddish in color. It has the end adorned with a dozen small spines and the cremaster equipped with hooked bristles. Measures 6-7mm in length.
The egg is lenticular in shape, initially opalescent in color first, then yellowish, measuring 0.75 x 0.6 mm.

Attitude and Life Cycle –
The Grapholita funebrana is an insect that overwinters in the mature larva stage under the rind or in other shelters in the orchard.
Adults flicker in the period between spring and early summer; the 1st flight takes place between April and June, depending on the latitude.
The females lay on the small fruits, in the distal area.
Subsequently, after an incubation period ranging from 6-7 to 14-15 days, the young larvae enter the fruit by digging tunnels.
In this stage, most of the affected fruit are subject to drop, so the first generation larvae either degenerate or complete their development on the ground (inside the fruit), where they crystallize to originate the adults (2nd flight) in the month of July.
From this flight there will be the second larval generation which causes the typical damages on the already developed fruits. Generally these larvae are destined to overwinter; however in some areas, with climates favorable to the phytophagous, a 3rd generation can occur at the end of summer.
In this way this insect completes 2 to 3 generations per year.
The damage is caused by the larvae that feed on the fruit pulp. In these the larvae dig tunnels up to the core which are covered with excrements and rosure which represent the residues of trophic activity.
Fruits that are affected in the early phase undergo a drop while those affected in a medium advanced stage of development have a less consistent pulp with a darker color.
In these conditions the fruit is slightly deformed and may be subject to fungal rot due to Monilia.
The damage is manifested by the appearance, on the fruits, of gummy cirrus clouds that come out in one or more points corresponding to the exits of the tunnels.
However, if the fruit is hit late, the obvious signs of the attack may not even appear.

Ecological Role –
The plum fruit moth is an insect that, if not properly controlled, can compromise the entire plum tree cultivation of the year. However, with some biological control techniques it is possible to limit its proliferation.
The attack on the fruit by the larvae of Cydia funebrana is recognized by the escape of gummy substances from the inlet and outlet holes. Another symptom is an early coloration concentrated only in one part of the fruit.
The damage of the cidia is concentrated on the fruits, in particular on the pulp, on which the larvae feed. It is necessary to distinguish the damage on immature plums (first generation) from those on ripe fruit (subsequent generations).
On the newly attached plums, the larvae dig a direct tunnel to the stalk attachment point, causing the fruit to fall off prematurely.
On nearly ripe plums, the larvae tunnel around the core. If the ripening of the affected fruit is far away, also in this case, the fruit falls. Otherwise, on ripe plums, the worm will be encountered at the time of consumption.
Furthermore, indirect damage may occur as the holes dug by the larvae represent the entry route for dangerous fungal pathogens, in particular the agents responsible for stone fruit monilia.
However, in nature there are useful insects that limit the infestations of Grapholita funebrana, in particular the parasitoids: Trichogramma spp. and Dibrachys cavus (calcidoid hymenoptera), Ascogaster quadridentatus (braconid hymenoptera), Lissonota artemisiae (ichneumonid hymenoptera).
The biological defense strategy against must be carefully evaluated. First of all, if plums are being planted, the choice of early ripening cultivars, less susceptible than late ripening ones, is well oriented (in the presence of infestations already found in the area).
Fruit defense begins with monitoring the flight of adults, with pheromone traps to be installed in the orchard in April. In a small orchard, even a single trap is enough. Obviously, the trap must contain the specific pheromone for Grapholita funebrana.
Furthermore, it should be borne in mind that the first larval generation does not generally require interventions with specific treatments. As mentioned, the damages are limited and cause fruit drops. More attention, on the other hand, must be paid to the second generation, the one capable of infesting ripening plums. In this case, an intervention threshold is established: if the capture in pheromone traps exceeds 10 individuals per week, then interventions based on bacillus thuringiensis var are recommended against the larvae. kurstaki that you find in specialized stores.
The treatment tries to hit the larvae and must be repeated if necessary, always following the flight of the adults and taking into account the times of embryonic development.