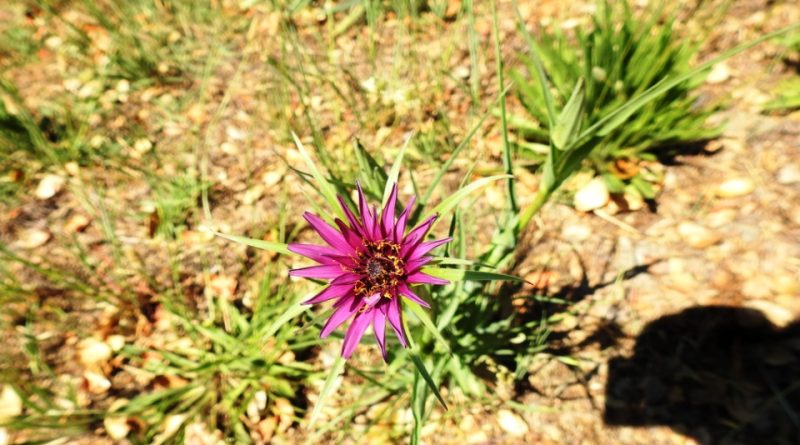 Geographic Distribution and Habitat –
The purple salsify is a plant native to an area that includes western and southern Mediterranean Europe, including its islands (Balearic Islands, Corsica and Sardinia), as well as North Africa, up to Pakistan.
This plant has been introduced and naturalized, and even cultivated, in central and northern Europe; in South Africa, North America, Southern Cone (Argentina, Chile, where it is grown locally), Australia and New Zealand.
In Italy it is present, with three subspecies, in all regions except in Valle d’Aosta and Trentino-Alto Adige.
Its habitat is that of arid, uncultivated meadows, along the roads and at the edges of the fields, below the mountain belt. 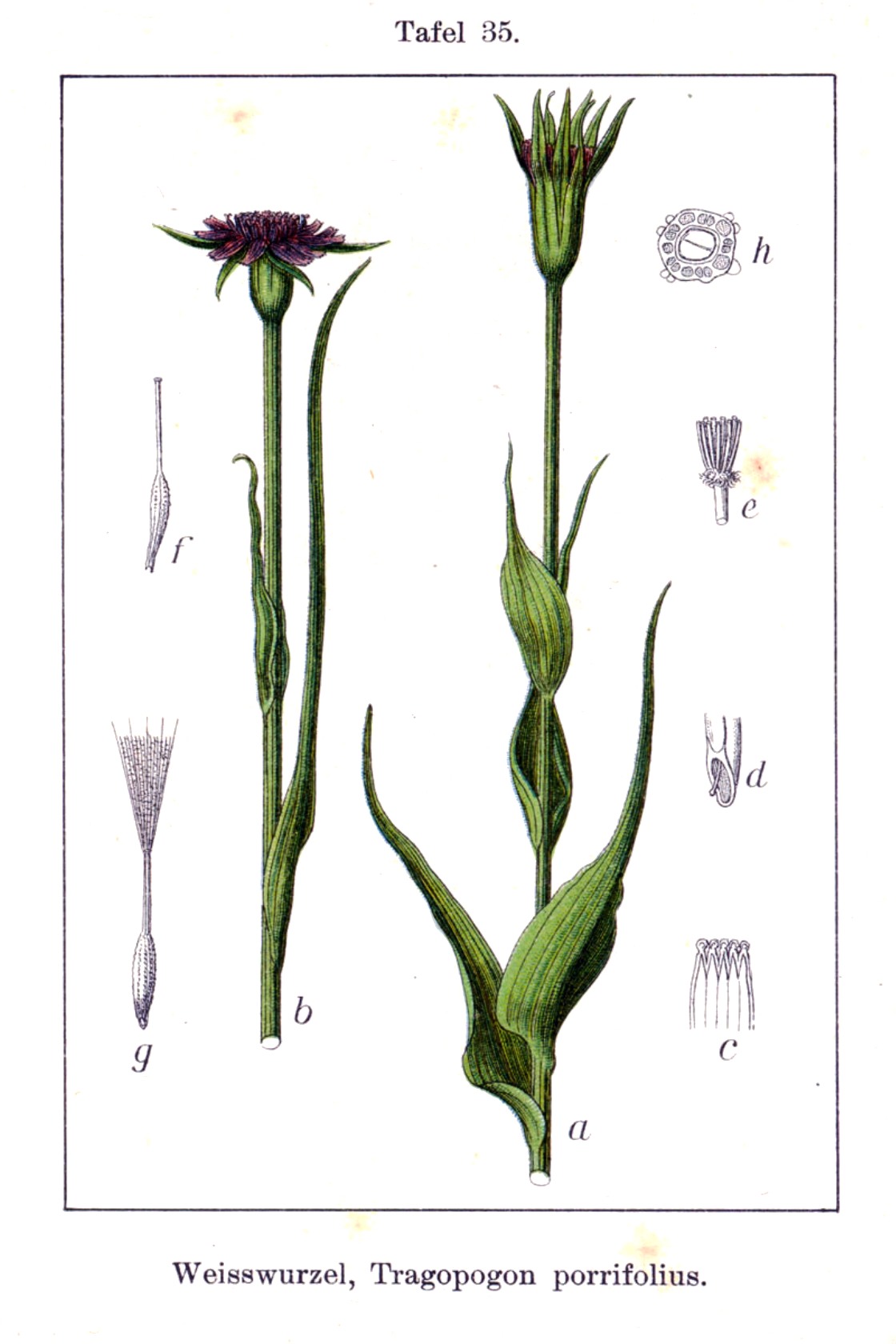 Description –
Tragopogon porrifolius is a herbaceous plant that reaches a height of about 1.2 m.
As with other Tragopogon species, its stem is largely unbranched and the leaves are somewhat herbaceous, plus it exudes milky juice from the stems. The taproots can become 15–30 cm long and 2–5 cm thick.
The leaves are distinguished in basal and cauline. Along the caule they are arranged alternately; the lower ones are linear, closely duplicated and cobweb on the edges; the upper ones have an amplessic sheath (15-20 mm wide) with reduced laminae. The color is green-gray. Basal leaf size: 0.5 cm wide; length 10 – 15 cm. Length of cauline leaves: 4 – 10 cm.
The flower head is about 5 cm wide and each is surrounded by green bracts that are longer than the petals. The flowers are similar but larger than those of Tragopogon pratensis and have a dull purple color and a diameter of 3–5 cm; they are hermaphrodites and pollination occurs through insects.
The flowering period is between May and June.
The fruits are beaked achenes, rod-shaped with light ribs. They have hairs on one end that facilitate the dispersion of the wind. They are 10–17 mm long and 1–3 mm wide not counting the beak, which is up to 55 mm long.
When the fruits are fully formed, the hairs give the appearance of a hairy ball.
It bears fruit until August.

Cultivation –
The purple salsify is a plant that to be cultivated prefers deep soft and fresh soils and struggles in stony soils.
This plant is occasionally grown for its fleshy, edible root, rich in inulin.
Propagation occurs by seed. Sowing must be carried out directly in the open field as early as possible during the year, in early spring if the weather conditions allow it.
Sowing often fails unless the soil is kept moist until the seedlings grow well.
Harvesting is late autumn-winter, after about seven to eight months of cultivation.
For the particular type of cultivation (partly autumn and winter) a temperate Mediterranean climate is required.
This plant forms hibyrids with Tragopogon pratensis which can naturalize in various parts.

Customs and Traditions –
Tragopogon porrifolius is known by various names also depending on the area where it grows spontaneously or has been cultivated for quite some time now.
This plant is grown both for its ornamental flower and, as mentioned, for its edible root.
The young leaves can be eaten in salads; the root is edible when cooked, and the plant was once grown for this purpose.
A root-derived latex can be used as chewing gum.
The root is known to have a mild flavor when raw, described as asparagus or oysters.
Flowering sprouts can be used like asparagus, raw or cooked, and flowers can be added to salads, while sprouted seeds can be used in salads or sandwiches.
This plant contains 77% water, 19% carbohydrates, 3% protein and contains negligible fat. In a reference quantity of 100 grams, it provides 82 calories and a moderate content of riboflavin, vitamin B6, vitamin C, manganese and phosphorus.
Among the biochemical principles present we recall that it contains polyphenolic substances which are in the preliminary research phase for their potential biological effects. Tragopogon species are being studied at the biochemical level for their new enzyme forms and genetic polymorphism.
This plant has uses as a medicine. It is purifying with beneficial effects on the liver and gallbladder.
The root is antibiliary, slightly aperient, de-obstructive and diuretic. It is used in some areas specifically in the treatment of obstructions of the gallbladder and jaundice and is also used in the treatment of arteriosclerosis and hypertension.

Preparation Method –
Tragopogon porrifolius is a plant, as mentioned, which is edible but the roots and leaves are more palatable if harvested before the flower stem is produced.
The roots are typically harvested from October through early spring, or they can be harvested in late autumn and stored until needed.
The roots have a delicate and slightly sweet taste, an effect due to inulin; they can be cooked simply boiled and seasoned with various sauces, or breaded and fried. The leaves of young seedlings can be eaten raw in salads, or boiled.
The outer layers can be scraped off, with the root dipped in cold water to preserve its color. If too hard to eat, they can be boiled with a pinch of baking soda and a change of water. Raw young roots can be grated for use in salads, but older roots are better cooked. They can be added to soups, stews or stir-fries. Puree (alone or with potatoes) is recommended with fish.
The flowering shoots can be eaten like asparagus, both raw and cooked and the flowers can be added to salads; sprouted seeds are also edible and can be used in salads or otherwise.