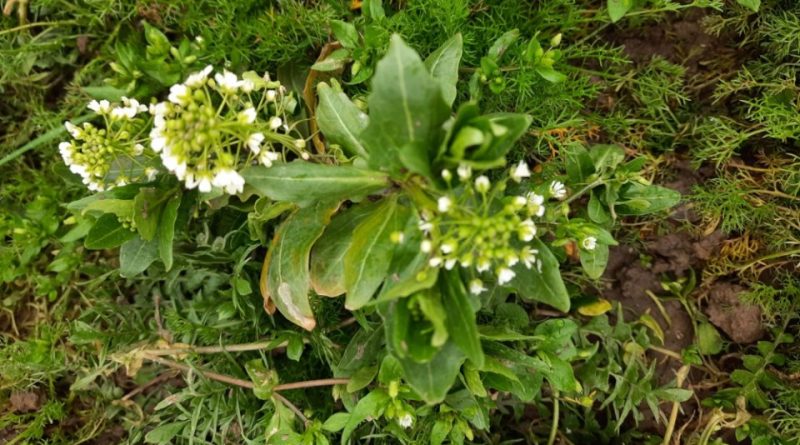 The field pennycress (Thlaspi arvense L., 1753) is a herbaceous species belonging to the Brassicaceae family.

Etymology –
The term Thlaspi comes from the Greek θλάσπις thláspis, a plant mentioned by Dioscorides and Hippocrates which would derive from θλάω thláo press, compress, crush: for the compressed aspect of the siliquettes.
The specific arvense epithet comes from arvum campo, arable soil, that is, arable plant, in reference to the growing environment.

Geographic Distribution and Habitat –
The field pennycress is an annual plant native to western Asia, with a prevalent distribution in the northern hemisphere except for some occurrences in South America and south-eastern Australia.
In Europe it is common as well as in Asia and North America.
In Italy it is a plant of ancient introduction following crops (archaeophyte), present in all regions of Italy except in Sardinia (but for some time no longer found in Calabria and Sicily).
Its typical habitat are cereal fields (it can be considered a weed), vegetable gardens and ruderal areas where it grows preferably on both calcareous and siliceous substrates, with neutral pH and high nutritional values ​​of the soil which must be moderately humid. The altitude diffusion is between 50 and 2200 m above sea level. 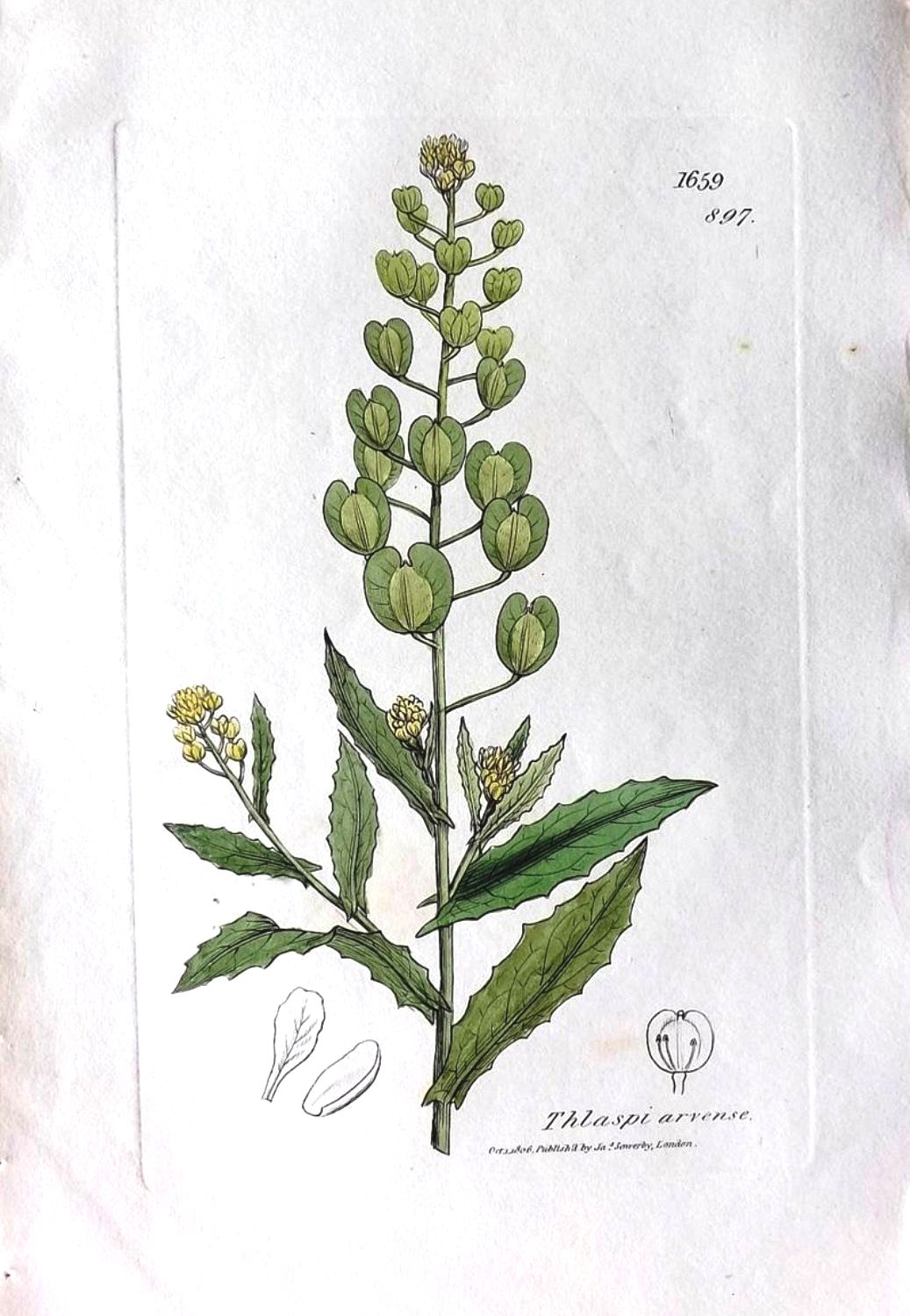 Description –
Thlaspi arvensis is an annual plant that grows up to 60 cm, fetid and glabrous, with erect branches.
The stem leaves are arrow-shaped, narrow and toothed.
The flowers are on racemes or spikes; the flowers are small, white, with 4 sepals and 4 longer petals.
The flowering period is May-August and the flowers are pollinated by bees and flies.
The fruits are round, flat and winged pods with a deep apical notch, measuring 1 cm in diameter. These contain small brown-black seeds.

Cultivation –
Thlaspi arvensis is a plant capable of adapting to various climates and which is commonly sown in October to be harvested in the period of May-June.
A precipitation of about 300 mm is required to reach its yield potential.
In fact, the limited availability of water depresses the yield, so it does not adapt well to arid environments where natural rainfall is the only source of humidity.
Current studies suggest a sowing rate of 1500 seeds per square meter for Europe, while a suggestion of 672 seeds per square meter for the United States. This variability is due to different climatic factors.
The recommended sowing depth is about 1 cm. For good germination speeds it needs about 25-40 mm of water and prefers cold and humidity.
In order to increase yields, several studies have evaluated the effect of fertilization; however the results in the presence of fertilization (especially with nitrogen and sulfur) with respect to non-fertilized samples have not yet led to certain and definitive results.
Thlaspi arvensis can be harvested with common machinery used for the production of wheat / corn and soy. This makes it conducive to integration into many crop rotations. As this plant is grown during the winter period, harvesting combines are available in the spring as all other crops are harvested at a different time of the year. The yield in seeds ranges from 10 quintals / ha to 15 quintals / ha.
In the east-central United States, a common crop rotation is soybeans and corn. After harvesting, the fields are kept fallow. This plant also appears to be particularly suitable for oil production when grown before soybeans. Being a cover crop grown during the winter period with harvesting in the spring, it can effectively reduce soil erosion, prevent nutrient leaching, improve soil structure and increase biodiversity.

Customs and Traditions –
Thlaspi arvensis is a plant once known above all as a medicinal product or also for food use.
This plant contains: allyl sulfide, rhodoballyl, myrosine and sinigrin.
The plant has healing properties: in ancient times the seeds were used to clarify the blood under the name of “Semen Thlaspeos”. Other curative properties (again for folk medicine) are: diuretic (facilitates the release of urine), febrifuge (lowers body temperature), antibacterial (blocks the generation of bacteria) and antirheumatic.
For medicinal use the seed is a tonic; both the seed and the young shoots are said to be good for the eyes.
The seeds are used in Tibetan medicine and are believed to have an acrid taste and cooling power. They are anti-inflammatory and febrifugal, being used in the treatment of pus in the lungs, kidney inflammation, appendicitis, seminal and vaginal secretions.
The whole plant is used as: antidote, anti-inflammatory, blood tonic, purifying, diaphoretic, expectorant, febrifuge and hepatic.
It is used in the treatment of carbuncles, acute appendicitis, intestinal abscesses, postpartum pain, dysmenorrhea and endometriosis.
The contraindications say that the plant should be used with caution as high doses can cause a decrease in white blood cells, nausea and dizziness.
Furthermore, as mentioned, the plant has a wide antibacterial activity; it is effective against the growth of staphylococci and streptococci.
Its seeds have a high oil content and the species has gained interest as a potential feedstock for biofuel production.
Due to the high content of erucic acid, the seeds are not suitable for human consumption. Instead, the biomass can be used as livestock feed. Its rapid growth in the cold period favors its use as forage as a second crop. Its low biomass production makes it undesirable to focus on cultivation for forage production.
In the food sector, both the leaves and the fruits are used.
The plant has a bitter taste; it is usually boiled to remove the bitter taste. It is mainly used in salads, sometimes in spreads. It is said to have a distinctive flavor.
The leaves have a high protein content.
The seed is ground into a powder and used as a mustard substitute and can be sprouted and added to salads.
This plant, however, has returned to the fore due to the growing interest in its seed oil as a raw material for the production of jet fuel and biodiesel. Oils with a high erucic acid content are particularly suitable for the production of jet fuel. However, the characteristics of the oil are strongly influenced by specific environmental conditions such as precipitation.
Among other uses, the seeds contain 20 – 30% of a semi-drying oil which is used for lighting.

Preparation Method –
Thlaspi arvense is a plant that has been used for some time in both the medicinal and food fields; only recently is it finding interest in the field of biodiesel.
For food use, the leaves are used, which must always be collected before the plant blooms, otherwise they will be very bitter.
However, even the young leaves have a slightly bitter taste and scent, and they are not to everyone’s taste. These can be added in small amounts to salads and other foods. They can also be cooked in soups or used as a potherb; they taste a little mustard but with a hint of onion.
The young leaves, in addition to being used as a salad (but not in abundant quantity as, as mentioned, they are quite bitter), they can also be eaten cooked. The seeds have a mustard-like taste.
The seed is ground into a powder and used as a mustard substitute and can be sprouted and added to salads.