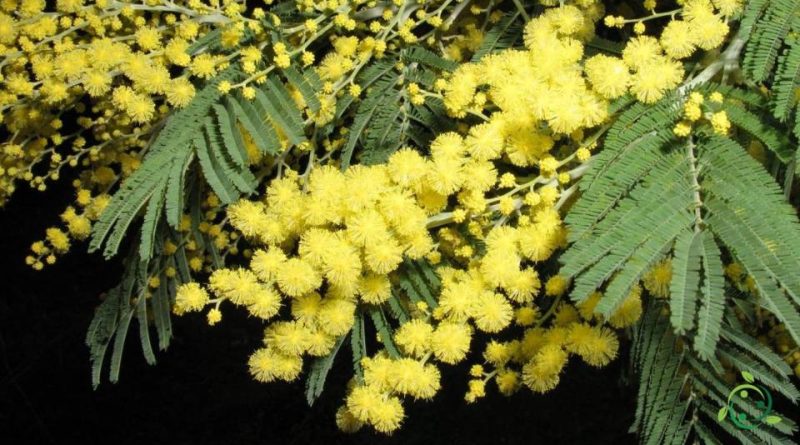 Silver wattle or blue wattle or mimosa (Acacia dealbata Link, 1822) is a plant of the Mimosaceae family native to south-east Australia.

Suitable breeding habitat –
Acacia dealbata is a typical pioneer plant and widely used as an ornamental plant thanks to its fragrant flowering with very delicate yellow flowers.
This species is native to Tasmania, Australia. Due to its wonderful characteristics as an ornamental plant it has had an easy development in Europe since the nineteenth century where it was introduced in the nineteenth century and where it adapts well in areas with a Mediterranean and mild climate, so much so that today it is widespread in parks and gardens.
The plant has been introduced in many countries with a temperate climate and in Italy it is very developed along the Ligurian Riviera, in Tuscany, in Sicily, and throughout the south, but also on the coasts of the northern lakes.
It is a very delicate plant that prefers a habitat with fresh, well-drained soils, which tend to be acidic, especially for good flowering. It grows preferably in areas with a temperate climate; instead it fears very harsh winters for a long time below freezing which can cause its death.

Propagation –
Silver wattle is a plant widely grown as an ornamental in the warm temperate regions of the world and is naturalized in some areas
The plant is hardy down to -5 ° C but does not survive prolonged frost.
It prefers a sheltered location in full sun, with acidic or neutral soil.
It is a plant that is often one of the first species to repopulate soils by growing rapidly and fixing atmospheric nitrogen; it also quickly creates conditions suitable for the settlement of other trees. It is an excellent pioneer species for the restoration of native woodlands, although it should only be used within its native range due to the possibility of it invading other habitats. It can also be used for the creation of woodland gardens.
The large root system of this plant also helps prevent soil erosion.
It is a fast growing species and is used in windbreaks and also to control soil erosion, stabilize slopes and ravines.
Propagation occurs by seed; sowing must be done as soon as the seed is ripe in a sunny position in a protected environment.
The dried seed of most, if not all, plants in this genus have a hard coat and can benefit from scarification before sowing to accelerate germination. This can usually be done by pouring a small amount of nearly boiling water over the seeds (being careful not to cook them) and then soaking them for 12 – 24 hours in warm water. By now they should have absorbed the moisture and swelled – if they haven’t, carefully make a cut in the mantle (being careful not to damage the embryo) and soak for another 12 hours before planting.
After which it can be sown in the spring.
As soon as the seedlings are large enough to be handled, they should be placed in individual pots, in a sunny and protected position for their first winter.
The definitive transplant must be carried out in late spring or early summer, after the last foreseen frosts; for the first winter, especially in colder climates, it is good to protect the young seedlings.
Propagation can also take place through half-ripe wood cuttings to be prepared in summer and placed in pots and protected in a shaded greenhouse.
The established seedlings will be grown for the first winter and planted in the open field in late spring or early summer. The success rate is fair.

Ecology –
Acacia dealbata is a plant that, outside its original range, has settled and naturalized in various regions including: Sochi (Russian Black Sea coast), southwestern western Australia, south-eastern southern Australia, Norfolk Island, Mediterranean region from Portugal to Greece and Morocco to Israel, Yalta (Crimea, Ukraine), California, Madagascar, Southern Africa (South Africa, Zimbabwe), South Indian highlands, southwestern China and Chile
In South Africa, the plant is considered invasive and is similarly considered in New Zealand.
In Spain, due to its colonizing potential and that it constitutes a serious threat to native species, habitats or ecosystems, this species has been included in the Spanish Catalog of Invasive Alien Species, regulated by Royal Decree 630/2013, of 2 August ; in this country, excluding the Canary and Balearic Islands, its introduction into the natural environment, possession, transport, traffic and trade are prohibited.
In Portugal, the species is part of the official list of invasive species (along with other acacia species).
In California, the species is invasive and appears to supplant many native species, even threatening some habitats.